Game two of the weekend. Here I was facing Jesse's purple Tyranids. I decided to use a Marine list that is a bit contentious at the moment, as it involves a horde of Scout formations, together with some other backup. Theory is it can be a bit hard to handle so I was keen to try it out. Despite my warnings Jesse was willing to be the potential victim despite the fact he hasn't played in a while...!


Incidentally I don't actually have 8 Scout formations, and was just using Tacticals to represent them for this game. Unfortunately we were playing at Jesse's place and I also left half of my Tactical formations at home(!), so they ended up being bit of a mismash of non-matching Rhinos and Tactical units. But heh they also all representing Scouts so I guess it didn't really matter.

Jesse's Tyranid Army was as follows:


That's 9 activations, 2 off table (the Lictor Swarms). Trygons started on table as Jesse was worried about the Marine activation advantage and also didn't want them to get isolated vs lots of Scouts. Jesse was short a painted Trygon so a Malefactor is filling in for it in this game. 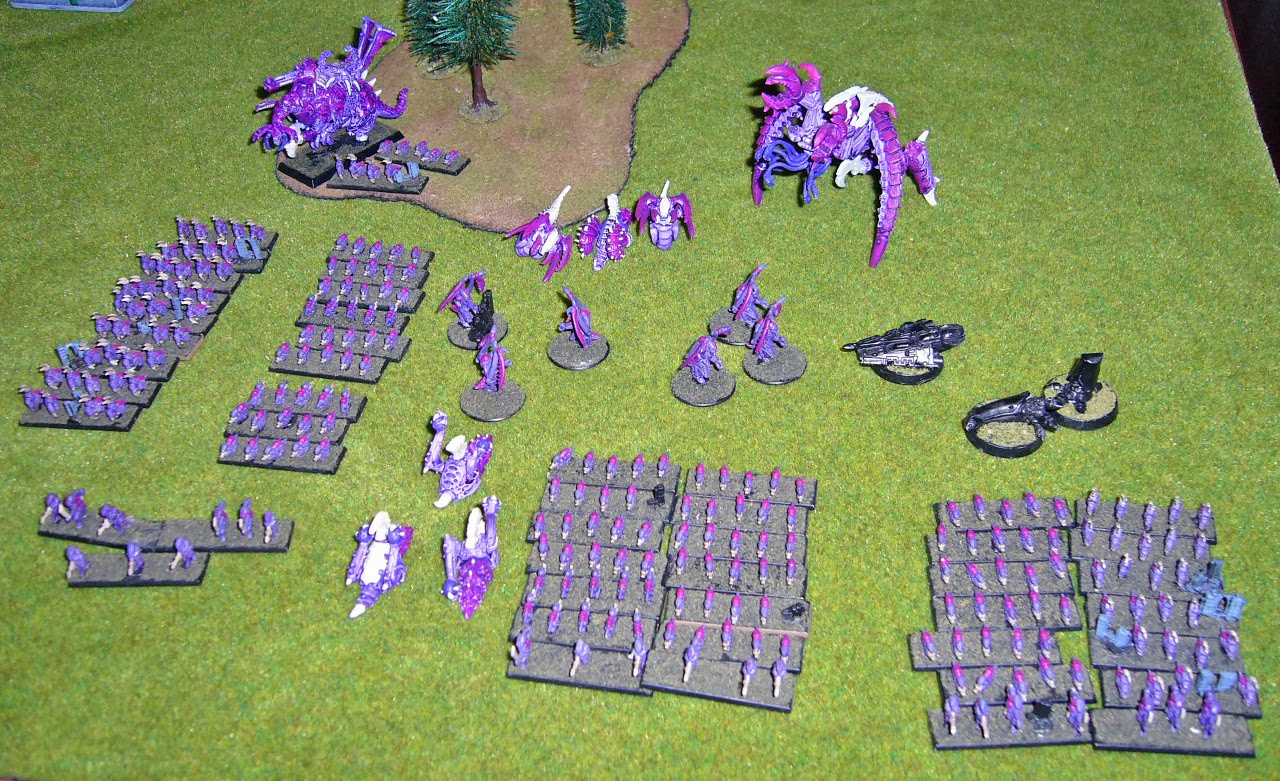 Here's the deployment, the Tyranids favouring their left flank, and the Marines spread out across their deployment zone and with three Scout formations garrisoned forward. The Tyranid Take and Hold objectives are on the left in the photo below, and mine are on the right, all of them on the centre line roughly.

Turn 1 consists of both sides cautiously moving forward and exchanging fire, with two of my Scout formations on the right losing two Scout units each.  I cause negligible casualities, but do place quite a few Blast Markers on the Tyranid right flank swarm and Trygons. 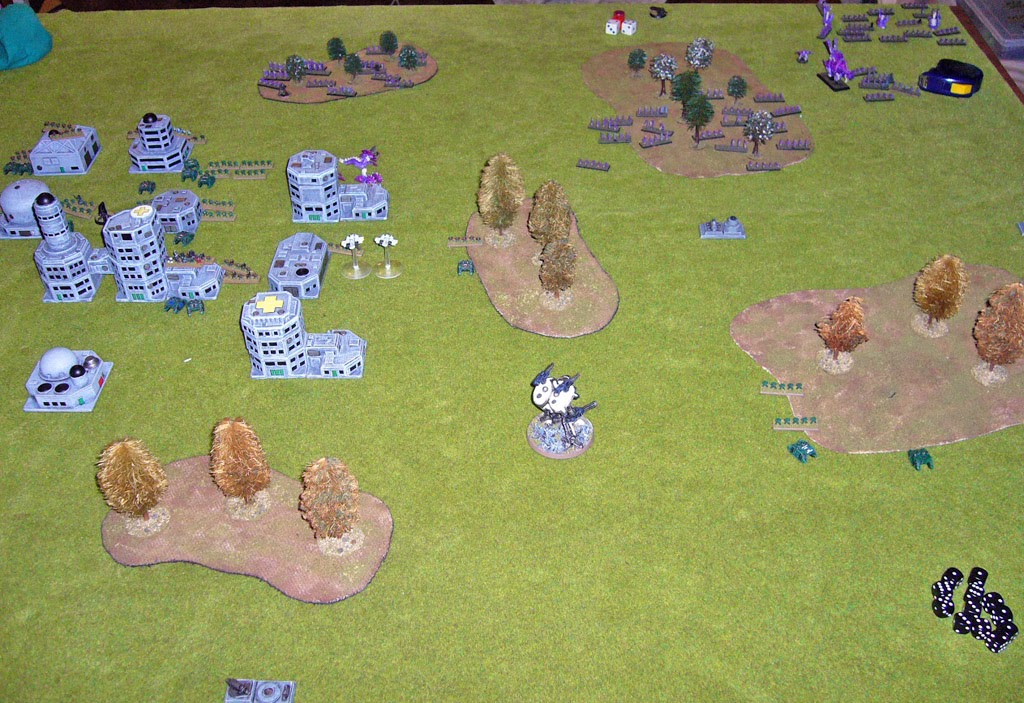 The Hierophant has marched up behind the forest (only three trees but it's really a dense line of sight blocking forest honest!) as it stalks the Warlord Titan. 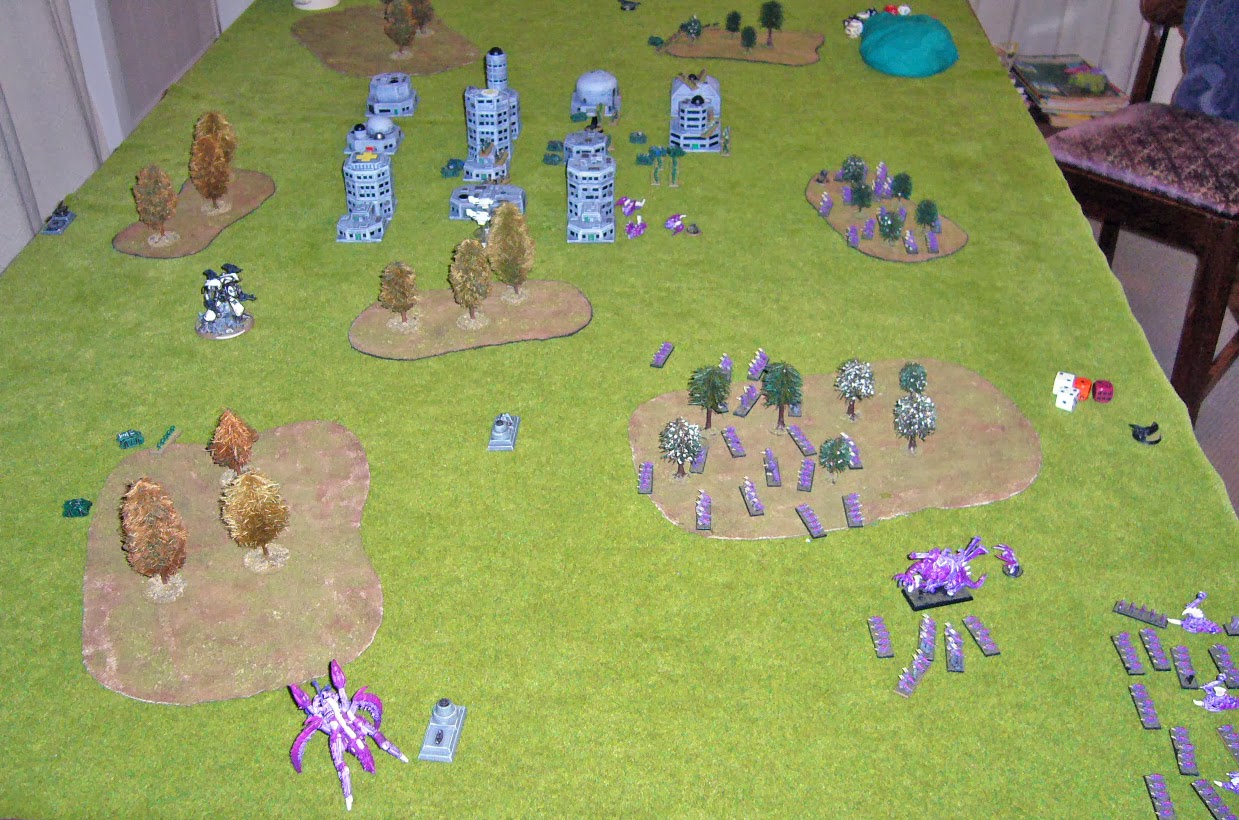 End of the turn 1 and I have massed six Scout formation on the Tyranid right flank, half of them them moving there after the Tyranids have activated all their formations due to the activaton disparity (me having 10 formations to the Tyranid 7 on table). 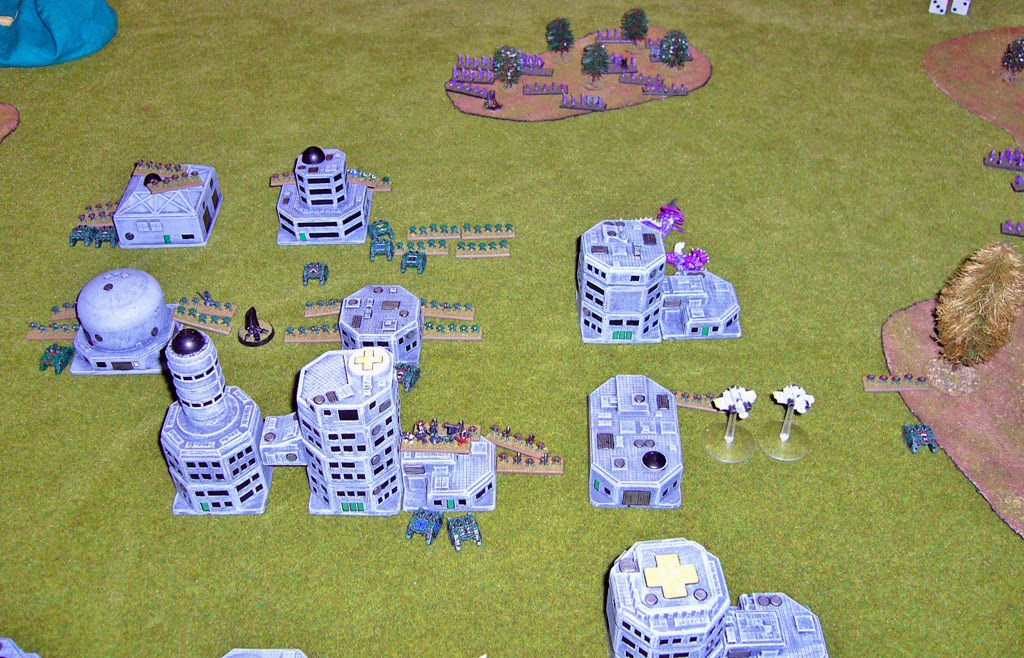 The Tyranid Lictors teleport behind the Warlord hoping for a lucky strike... 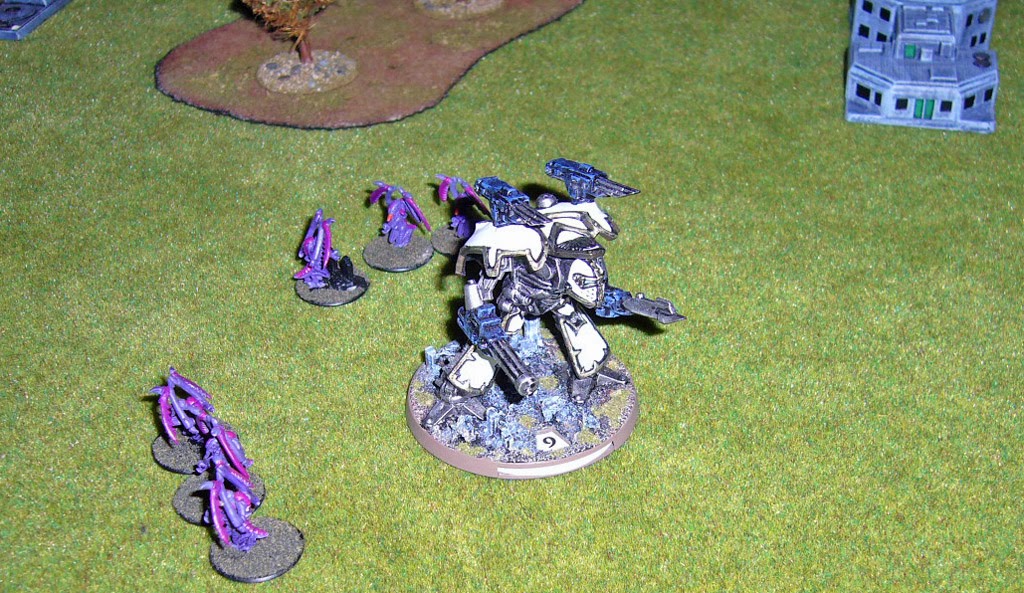 Marines win the Strategy Roll and I do a combined firefight engage action with 3 Scout Formations (Captain in one of them has the special Commander ability which lets you combine friendly formations within 5cm for an assault). I lose two Rhinos transports, while the Tyranids lose more and break and retreat. 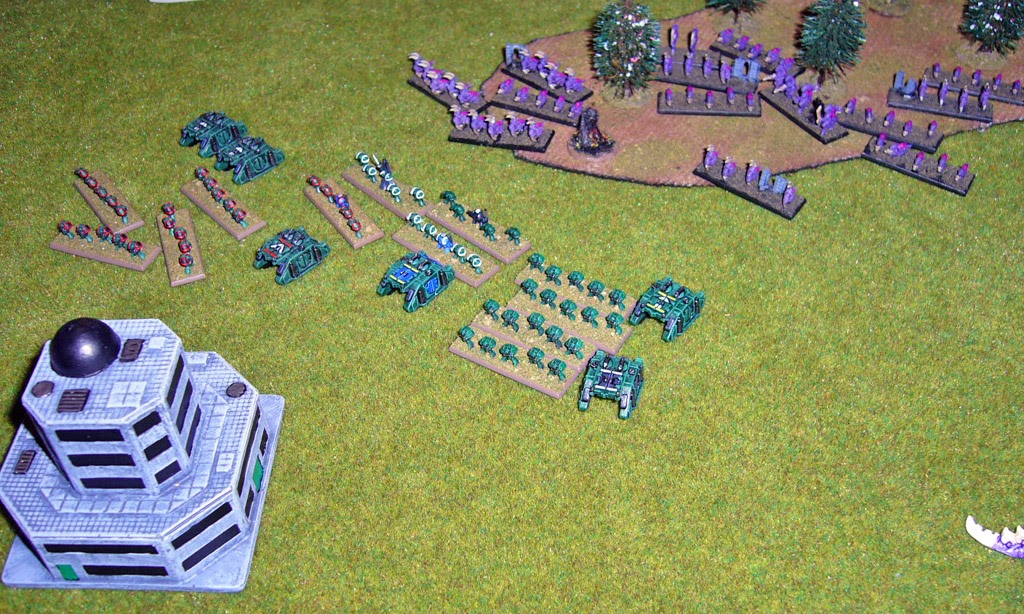 I retain initiative and do the same again with another two formations against the Trygons, doing two points of damage to them and winning they firefight with some support from Scouts from the previous firefight. The Trygons also break and decide to retreat back towards their Blitz objective. 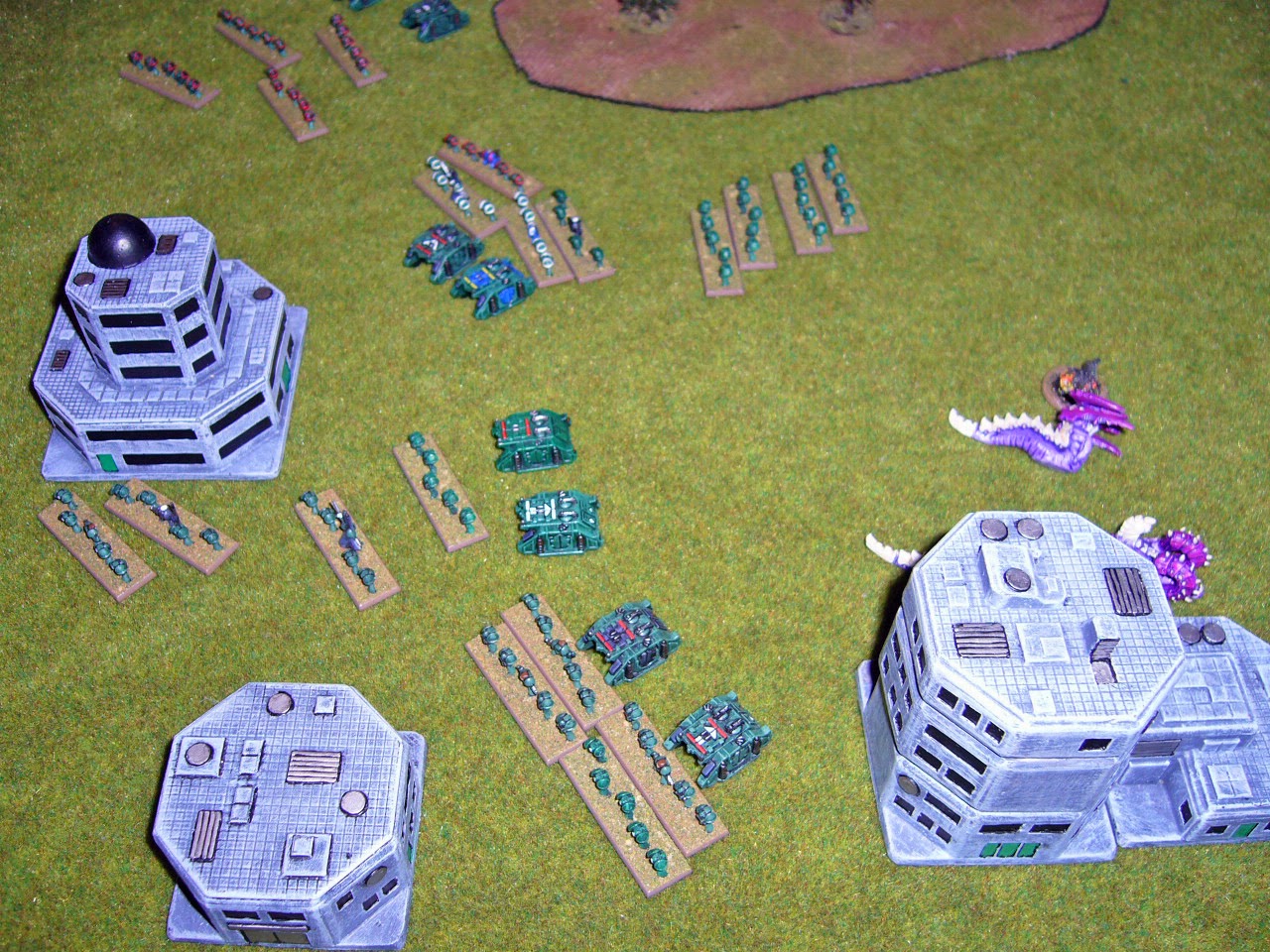 The Tyranid Lictors assault the Warlord in two successive activations, doing a point of damage to the Warlord but being wiped out in the process. 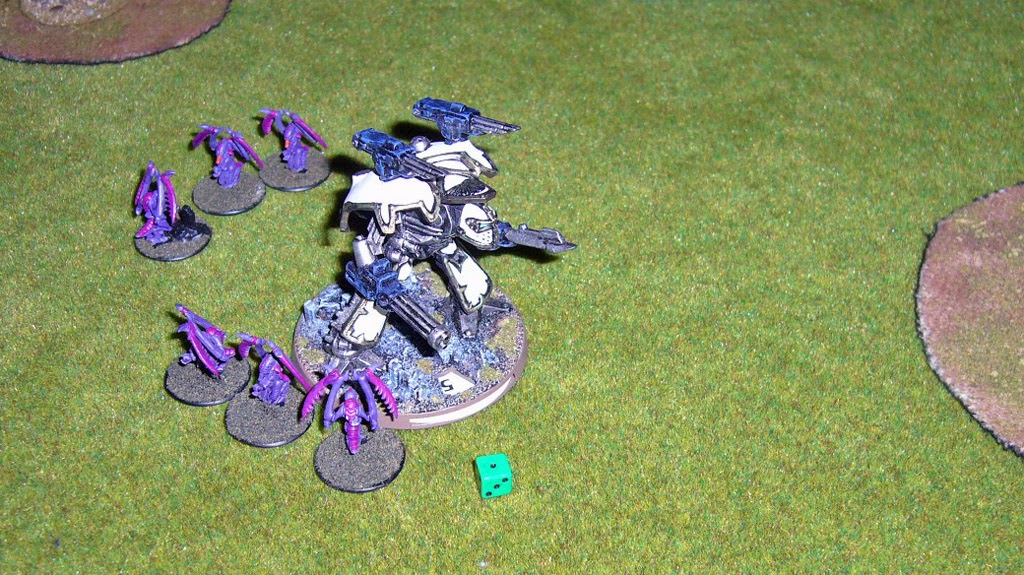 My Devastators kill a gaunt from the central Tyranid Swarm which then engages and wipes out an understrength Scout detachment. I open fire on the Swarm with the Warlord and Thunderbolts. 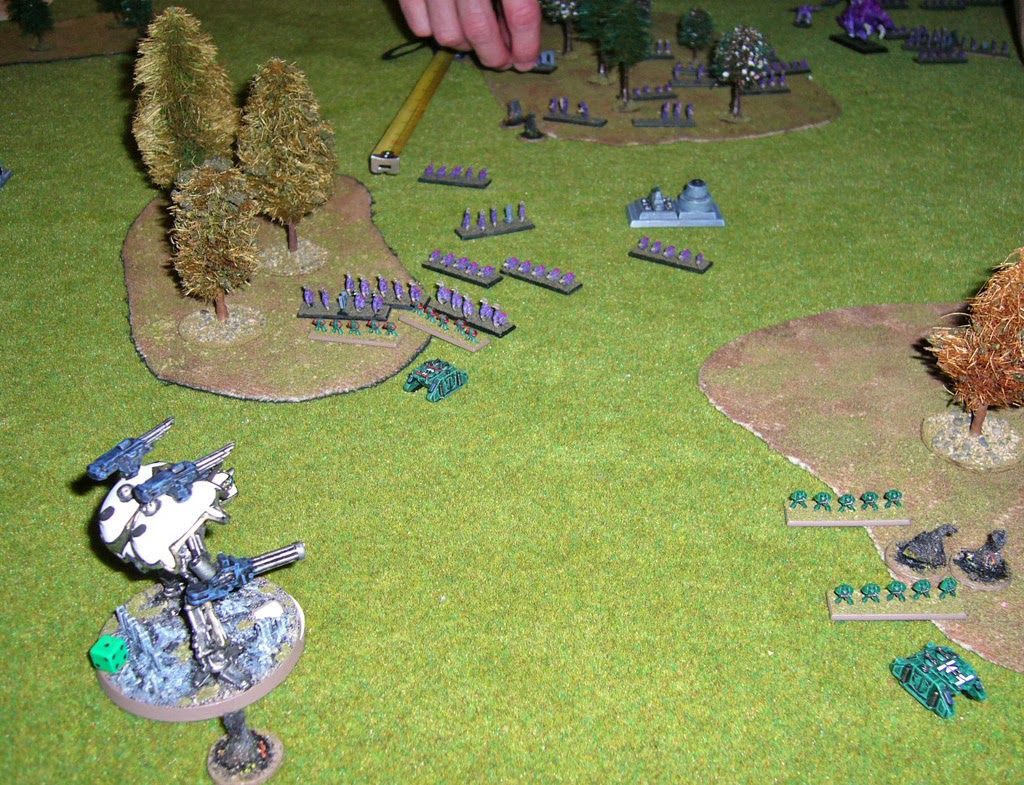 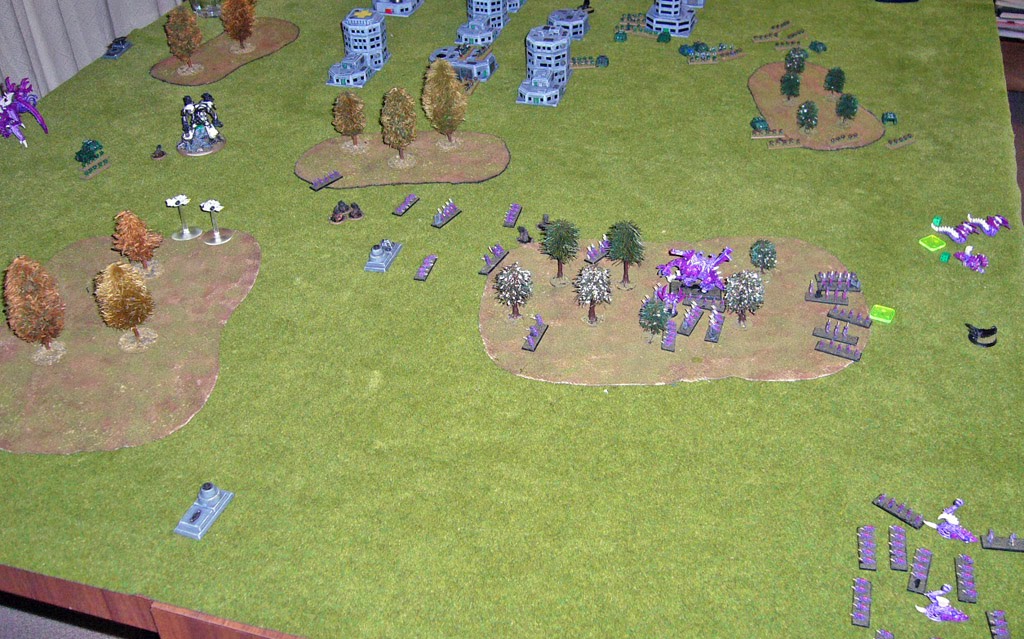 End of turn and the Hierophant has jogged around behind the Warlord. 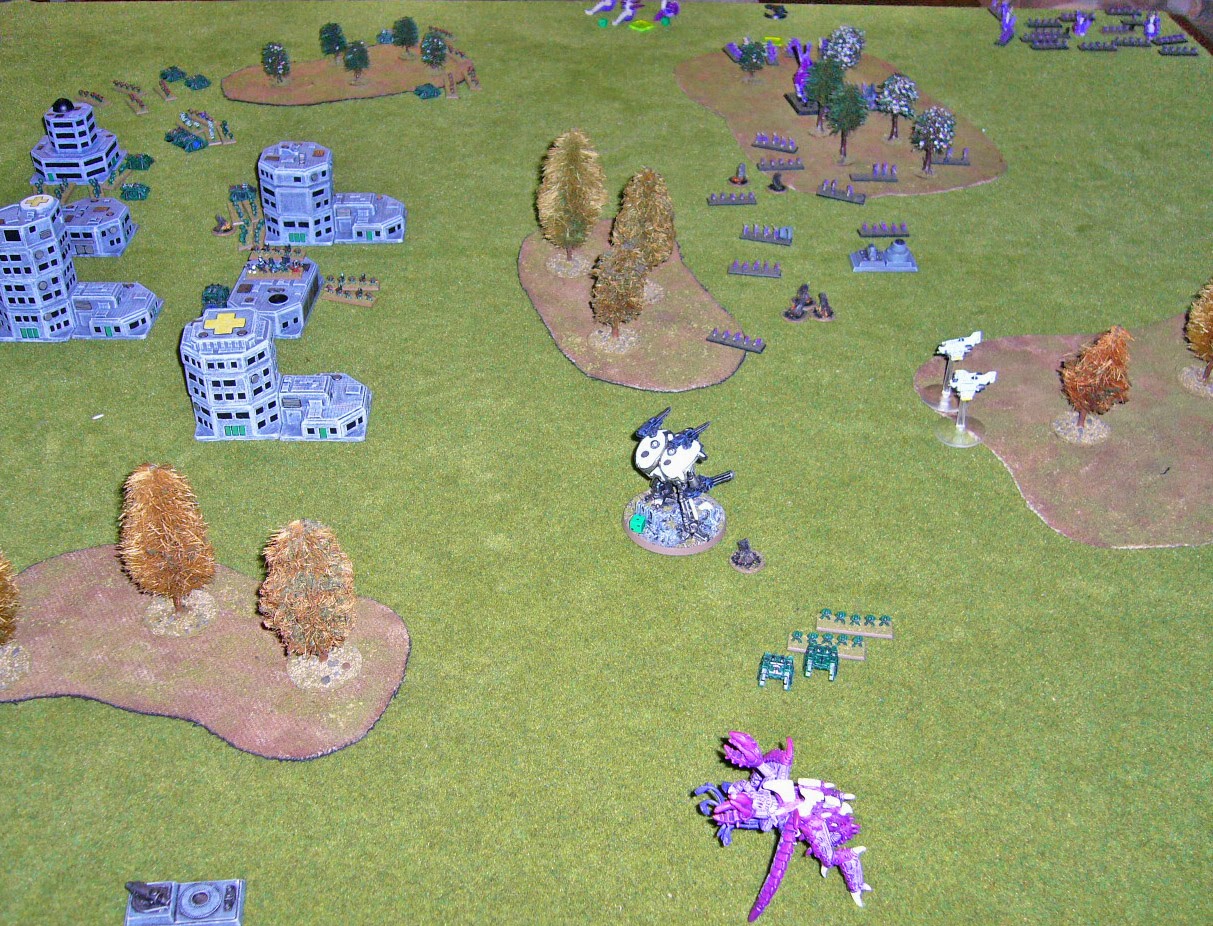 As odds will have it, Marines win Strategy Roll again and the Warlord backs away and blasts the Hierophant with its full armament. 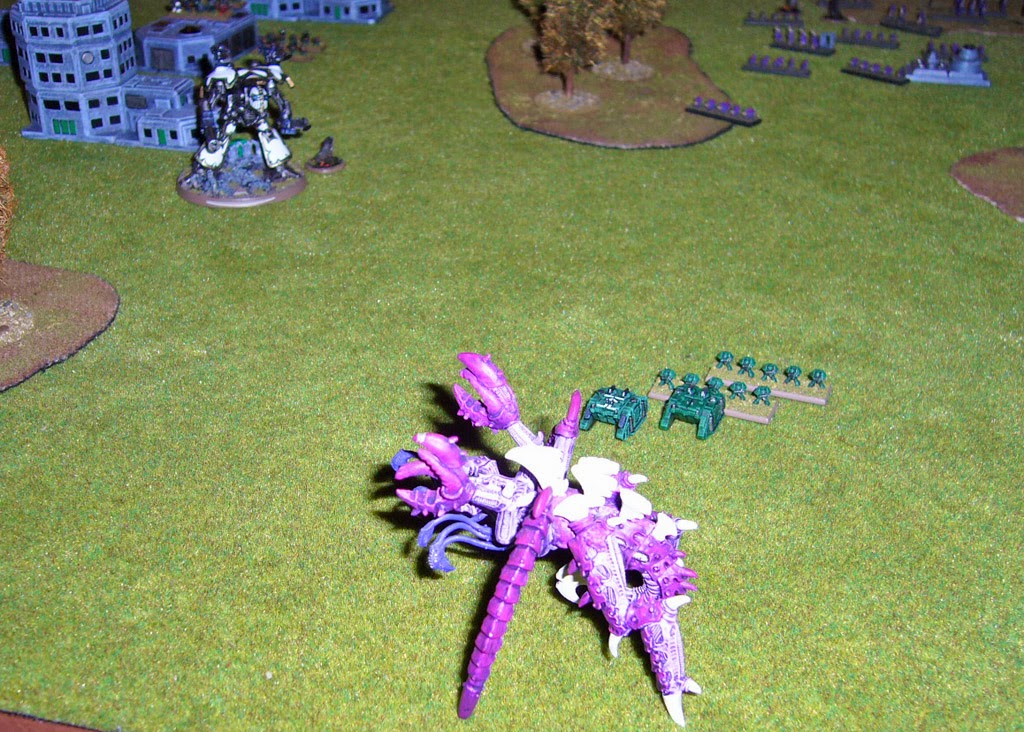 The Hierophant loses five of six damage capacity and scuttles away to hide in the forest. 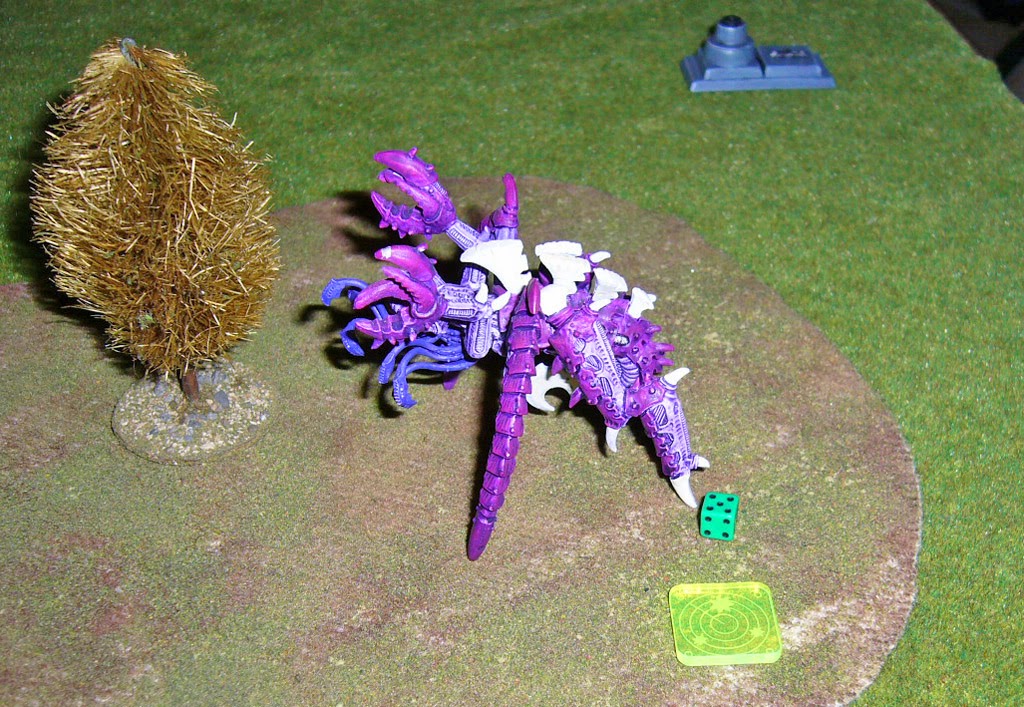 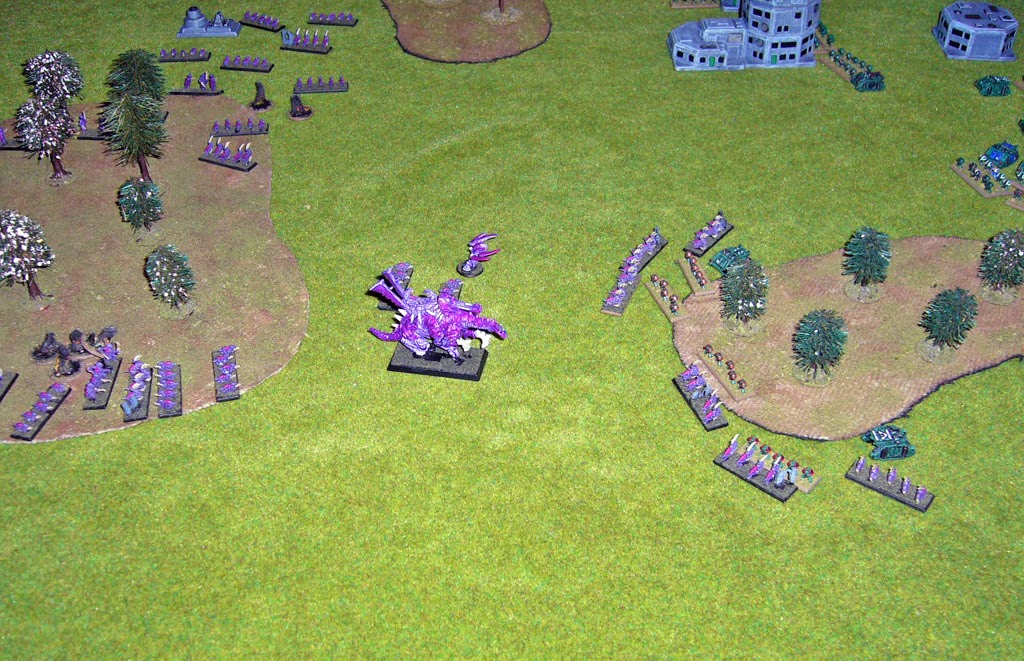 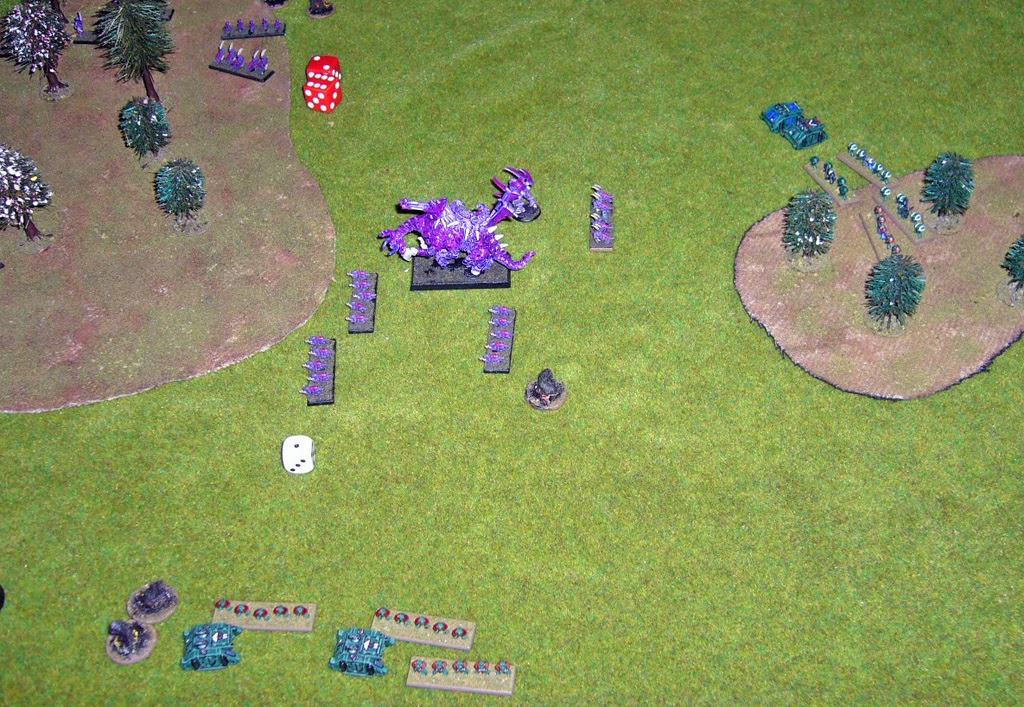 The Tyranids move their central swarm to hold their Take and Hold objectives and to be on my half of the table to deny me the "They Shall Not Pass" objective. 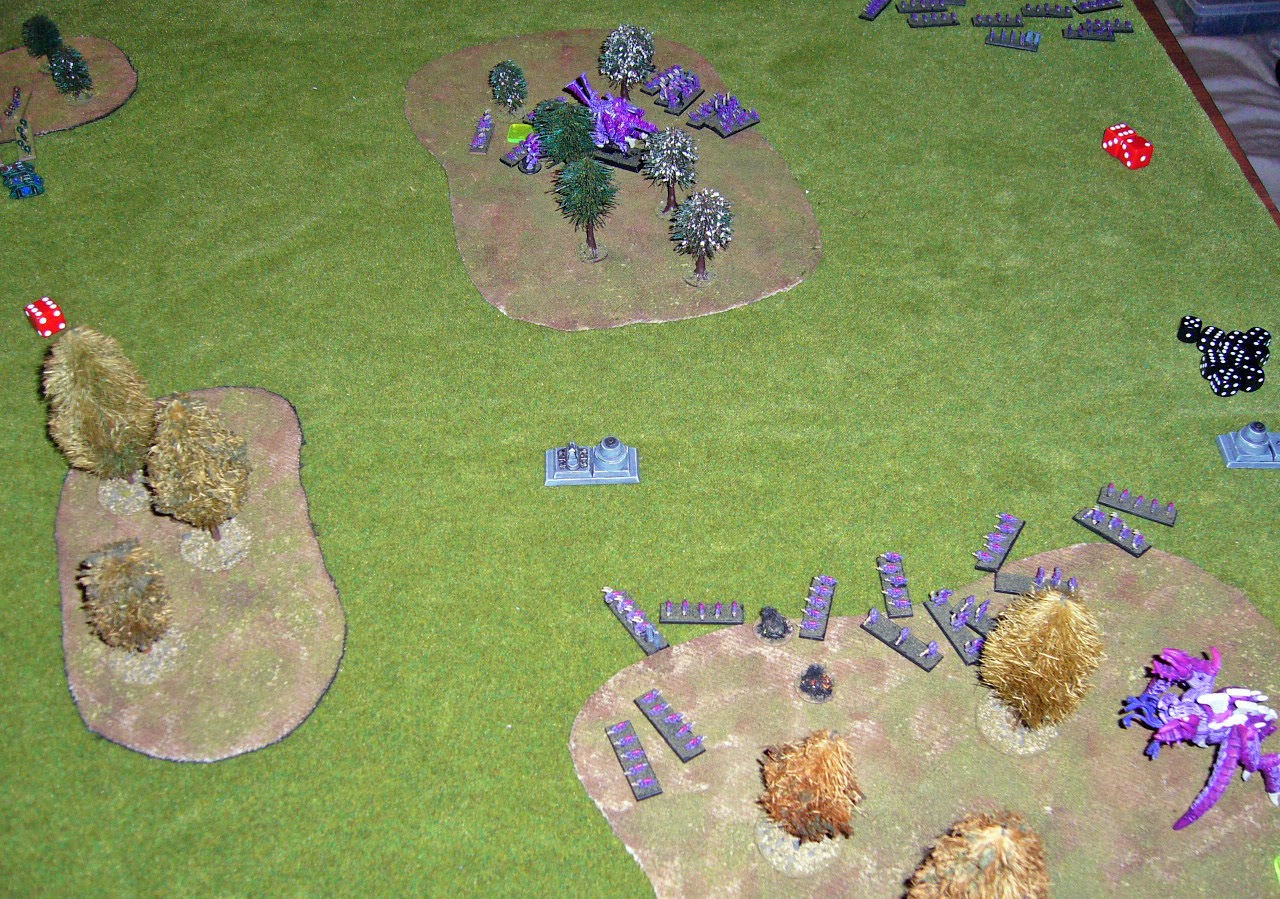 However I have already taken the Tyranid Blitz, and their Take and Hold and have won with three formations still left to activate. Game over. 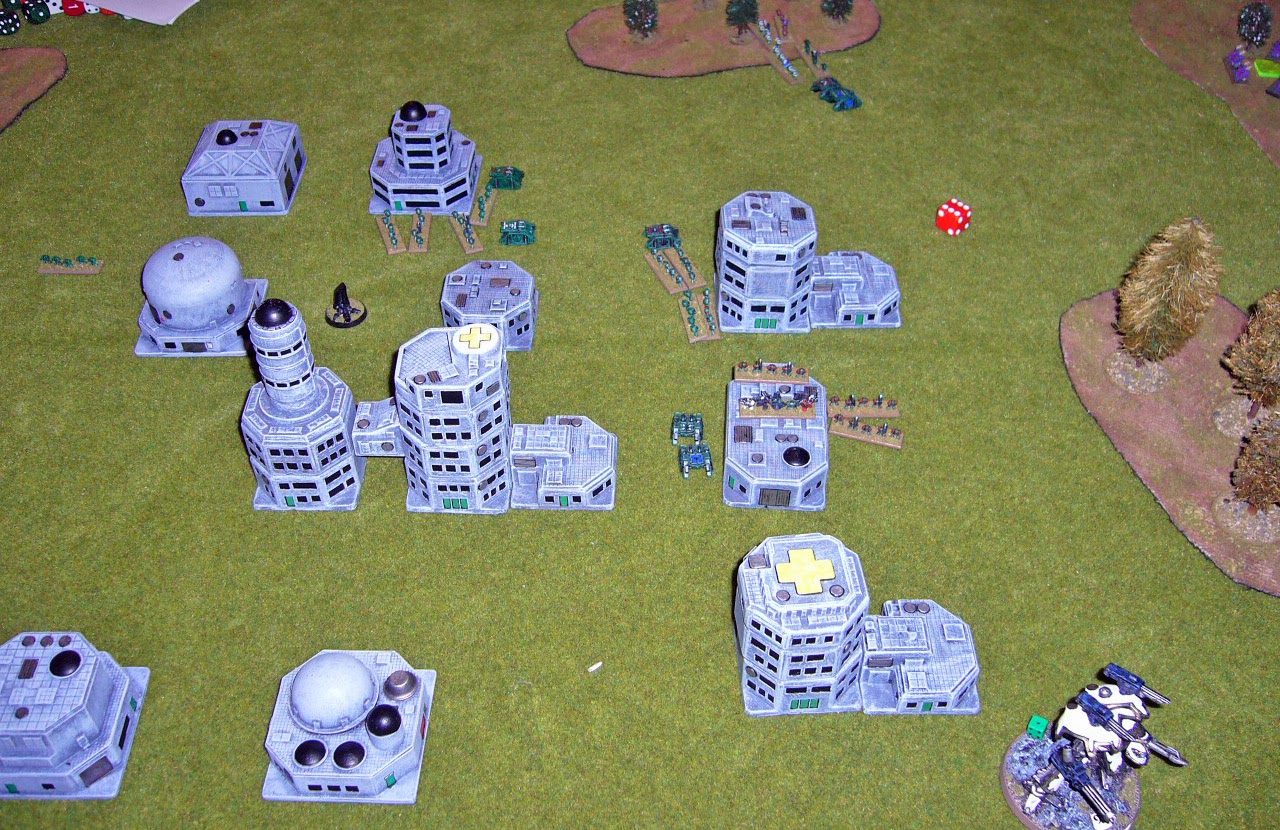 Not such a close game, with me using an annoying list with many small activations and Jesse not having played in a while. Target choice of the Lictors was not so great I think - they should have eliminated some Scouts instead, and the Dactylis Swarm should have been sitting on the Tyranid Blitz as a guard probably. Sneaking up on a Warlord Titan with a Hierophant is tricky to do obviously. Anyway I will have to try this style of Marine list again I can see! Just need to find another "volunteer".
at 21:42