Another crack at To Ur is Human played Tuesday a week ago. See the previous post on this game here for a rundown on these rules.

This time we played using the "Blinds", idea in the rules, to hide our deployments. 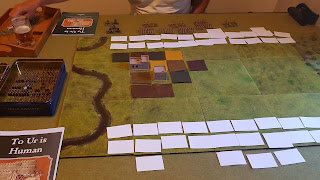 And blinds removed and armies revealed! Andrew has refused his right flank. 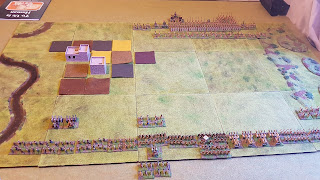 Andrew had done lots more painting since last time, including more battlecarts! My force had an extra unit of battlecarts and lots of archers. 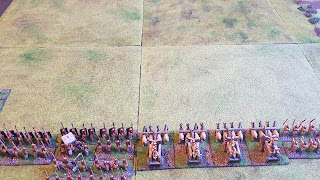 Andrew had lots of the spearmen and light infantry.

First moves, I throw back the enemy skirmishers, though they manage to frighten a battle cart unit! Another unit of my Battlecarts is doing a flanking move around the settlement on my left. 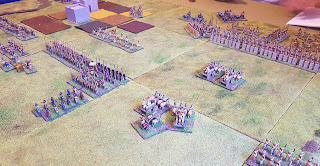 I rally, and the front battlecarts charge the line ahead of them hoping to frighten them. 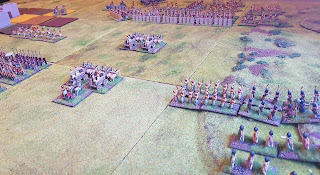 This works better than expected, the front shielded spearmen rout through their compatriots.  We were not sure exactly what to do here, but followed up the carts into the unshielded supporting spearmen, causing another fear test (I think this was correct), and then hacking them down with two rounds of combat because they couldn't flee through the routing shielded spearmen. 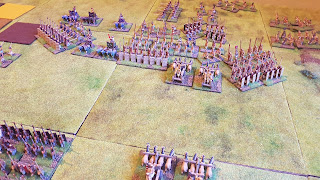 M other battlecarts charge the next unit, routing them too. 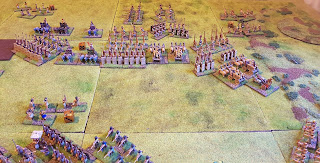 These battlecarts pull back, but they have inflicted a lot of damage! 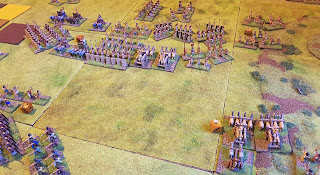 And once again, I forgot to take photos for a while! But as can be seen it has continued to go badly for Andrew's side, with my battlecarts and infantry routing his left flank, and his right isn't looking so good either! 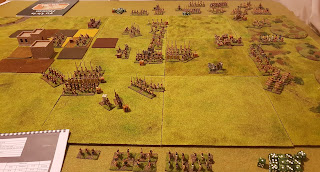 Whereas my battlecarts plunged into and through his spearmen, my own spearmen repulse his battlecarts! 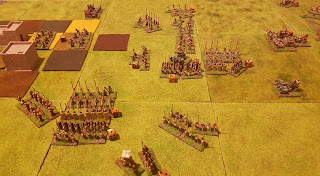 Here is the outcome of his battlecart attacks, remnants of one group pursued back into his lines by my victorious spearmen. My Royal Guard spearmen also manage to fend off the other battlecart group. 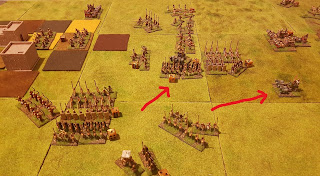 Final positions, a great slaughter by my battlecarts, and I've only lost a couple of units. 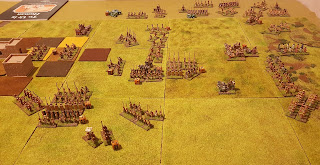 Here's a potential house rule Andrew raised after this game.
"Wonder if (house rule) we left attacking units in the adjacent square(s) - in terms of position.  Avoid trying to squeeze HI + supports + flank attack + target (HI + supports) all into one square.  Allow neighbours in the line an opportunity to join a successful defence in the first round.  Also would make which unit is in the square after clearer (frontal attacker)?  Would mean that a recoil (push back) left the flanking unit behind?"
Might try that in the next game, scheduled in a few days time.
at 11:15