Andrew and I decided to give BFG a try using some proxy fleets and a new (for us) Battlefleet Gothic Expanded Revised (BFG-XR) rules edition. An interesting game ensued, with dozens of attack craft dueling desperately between the capital ships! 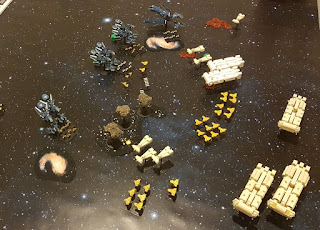 I used my Kraytonian models as Craftworld Eldar with the following fleet: 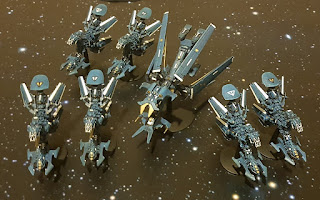 Andrew used scratchbuilt laser cut models for Tau.  All Tau carriers were equipped with Torpedo Bombers except one of the Hero's. 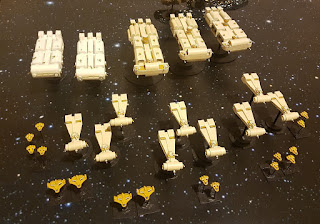 A look at the table setup. Sun is to the side towards the camera. I win role for first turn, and decide to make the Tau move first. 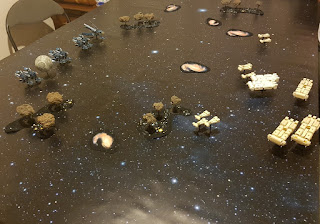 Tau advance towards the sun and launch their Torpedoes and Torpedo Bombers. 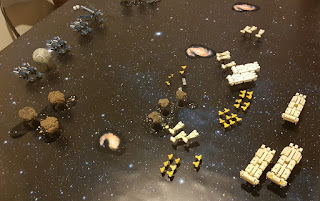 Eldar close as fast as they can, and launch their Fighters. I figure I have to get to the Tau Carriers and disable them as fast as possible, otherwise I will be overwhelmed by the tide of Bombers. Most of my ships advance on Lock On orders, and three Orca Frigates are destroyed by Eldar fire. 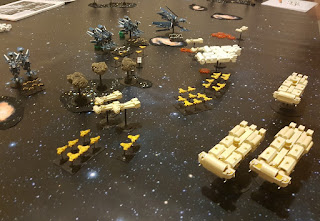 Some Torpedo Bombers launch their missiles and return to refuel. 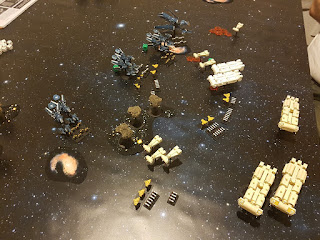 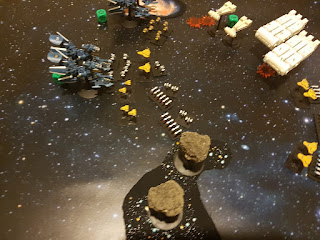 Successful intercepts for first turn means no Torpedoes get through. 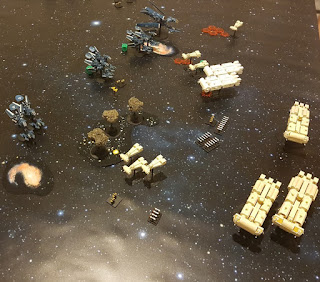 My central Wraithships have braced for impact and only take a single point of damage from Tau Capital Ship Fire. 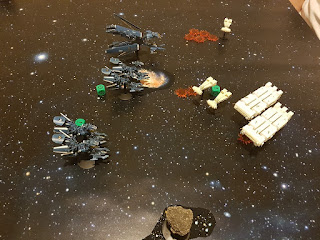 Tau advance and more Wraithships brace for impact as torpedoes arrive. I take two more points of damage and lose a sail (-5cm move) on one of them. 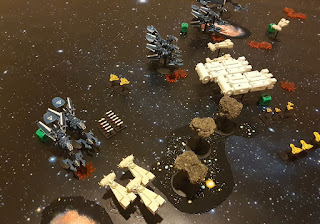 I close on the Tau Carriers. The far right Carrier loses 5 out of 12 damage and has its bridge destroyed (-3 Leadership permanently). Tau Ordinance attacks again, and while my Fighters deal with some of it, the closest Wraithship in photo below is crippled. 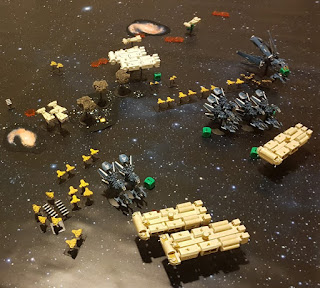 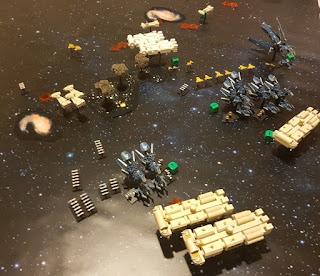 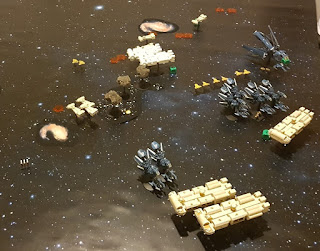 Tau Carriers flee along the sunward edge. The badly damaged Tau Carrier on the right manages to disengage successfully despite the destroyed bridge. 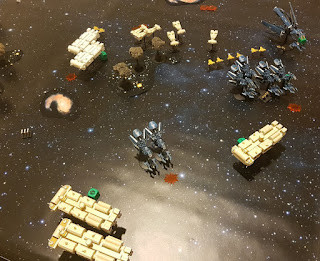 Carriers all reload and launch Ordnance again, and one of my closest Wraithships becomes a blazing hulk, the other becoming crippled. 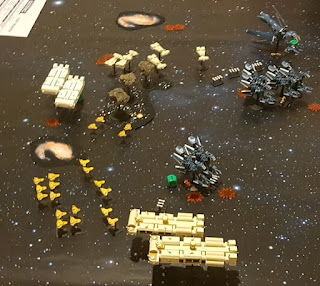 My crippled Wraithship disengages, while the others move to attack the remaining carriers. Unfortunatley I am now moving up into the sun and solar wind so only going 20cm maximum (rather than up to 50cm when abeam to the sun, or 40cm when it is to my rear quarter). My Void Dragon lags behind at the rear. I damage the next Carrier only slightly, knocking out its shield as well, but my Wraitships take more damage as waves of Ordnance hit them. 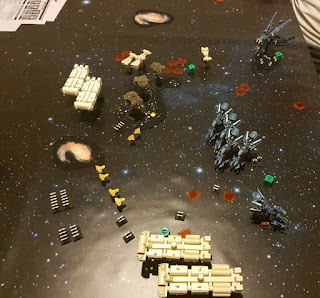 Tau Carriers keep evading the best they can, reloading and launching more Ordnance and one of my Wraithships explodes with a 16cm explosion destroying an Orca but doing no other damage other than dropping shields. 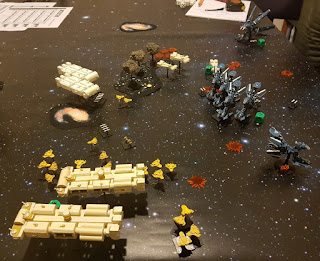 I chase after the Carriers, but am unable to cripple another one. More Ordnance launches from the Carriers. 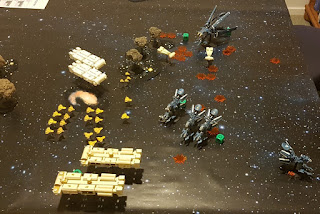 My Battleship lags too far behind to help my Wraithships against he Carriers, and instead has to target Orca Escort ships. 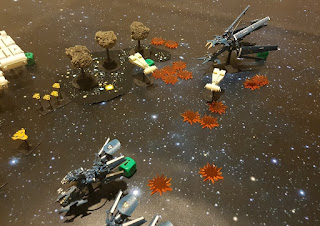 More Ordnance is launched and my remaining Wraithships are too crippled to continue to resist. The Eldar fleet disengages. Victory to the Tau! An interesting game, with Tau managing to wear down the Eldar for the win. We tried different tactics for our Ordnance this game, still not sure we've got the best tactics sorted out though! My fighter screen was unable to hold off the neverending tide of Tau Bombers, and I took too much damage before I could disable the Carriers. In hindsight I needed to have planned better so as to be upwind with the solar wind (or at least not as far away as I was) and targeted the Carriers more decisively. My largest ship being out of position was a mortal mistake. The battle looked close nonetheless at a couple of points, especially when I smashed the bridge of the first Carrier, and I was one point off crippling a second Carrier. If the Tau had failed a reload or two the result might have been quite different too! Nonetheless, Tau Carrier fleets seem like fearsome beasts indeed!
at 12:09