Setup below. Scenario is Fool's Gold, so there are 10 Bluff counters on the table, five placed by each player, with hidden values of 2 (2 counters), 1 or 0 (4 counters each) points. At end of round three they are all revealed and then whoever has the most points at end of game wins! An interesting scenario, and great one for me with all my flyers who will be able to react quickly (assuming they are still alive), once we know where the real gold is! 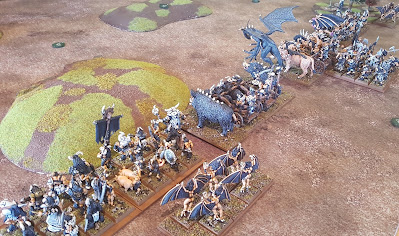 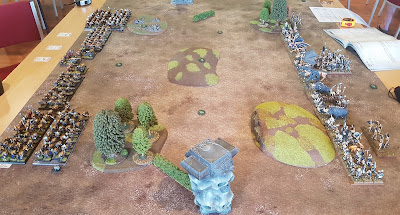 Turn one I advance a bit but not into range of all the Dwarven Shooting, (which has reload or potshot so won't be able to advance and shoot very effectively at all). Then turn two I rush up into charge range, taking damage across three units from the shooting and having my pink chariot unit wavered, but no unit destroyed.
Turn three I charge in taking out the organ guns with Flying Beasts. But Ironclads withstand the combined charge from Black Chariots and Warriors. The Dwarven countercharge with Shieldbreakers and flanking Ironwatch takes out the Black Chariots. (Actually the Shieldbreakers managed this themselves as the chariots were already damaged by shooting!) 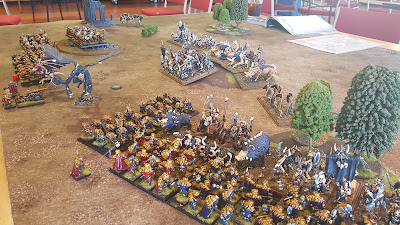 Pink Chariots and Longhorns then charge in and smash the Ironwatch, while the Jabberwocky Beast hits flank of the Shieldbreakers. Cockratrice Beast slays the cannon crew and spins around looking for new victims. 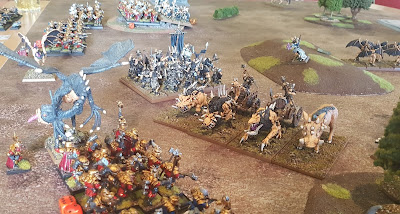 Left flank, Warriors and IronClads smash away at each other...

Dwarves take out my right flank Warriors, and pummel my Chariots. My Druid keeps healing the Chariots though, keeping them in the fight.

Longhorns charge the Ironwatch Rifles but are destroyed by counterattack of the two Dwarven Hordes. The Dwarven right flank collapses, but the Dwarf King is at least pummelling the Jabberwocky, wavering it each round and stopping it flying or attacking. 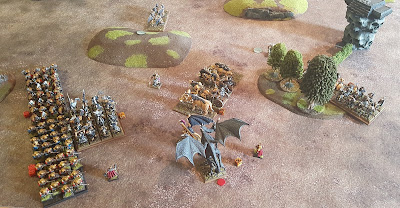 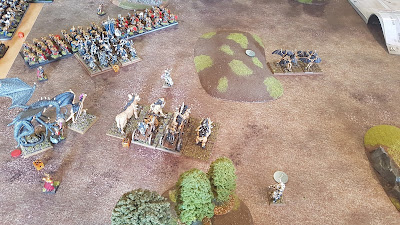 Game goes to Turn 7. Chariots and Cockratrice destroy the Ironclads... 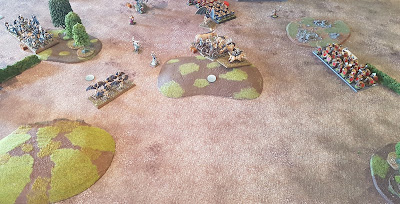 But are then destroyed down by Dwarven shooting and the last Ironclad Horde.
The Dwarven King slays the Jabberwocky.

And the game is over and there is not much left! But Herd has won due tocapturing three gold tokens to  zero for the Dwarves. Victory! A bit more luck turn 7 with shooting and a lucky overrun by the Dwarven Ironclads and they could have still won the game, but it was not to be.