Vaughan and I played our second Halpi's Rift game today, with his Abyssals taking on my Riverguard on the Abyssal Plane. See this previous post for the first battle in the Material Plane. 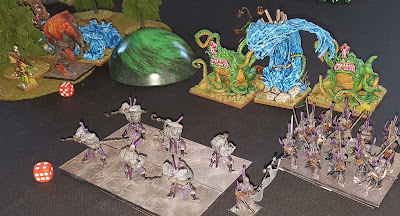 I don't really have any super demonic evil looking Abyssal terrain, so making do I flipped over the mat and added cotton wool some steam to the lakes, and evil tree in the middle of the forests, and some old magical vortices to represent the magical obelisks. :)
The Hellfire lakes give -1 to Waver and rout values of any unit touching them.
The Magical Vortices are blocking terrain, and any unit within 6" gets the Brutal +1 for each vortex within that range. (I.e. +1 to nerve checks when trying to rout enemy units).
The Channeling Table results for the Abyssal Plane tend towards destructive effects!
Armies used were similar to last time but changed up a bit.   My list was:

Here's the terrain. I used Epic Dwarf Map generator, but replaced buildings and hills with magical vortices, and difficult ground for the hellfire lakes. Mission is Loot, with the three treasure chests to pick up and hold across the centre line. 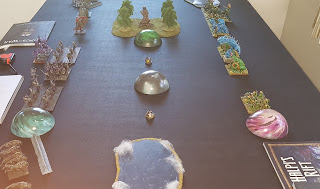 First turn, Abyssals win and move first with me following. My units are mostly faster, so I move up to within strike range of the Abyssals in centre and on right, but out of their charge range except for the Archfiend which will be able to charge if it wants. 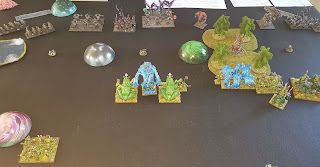 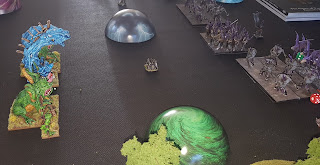 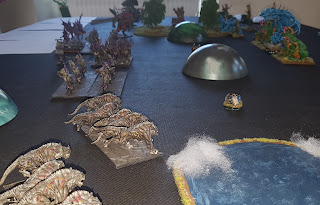 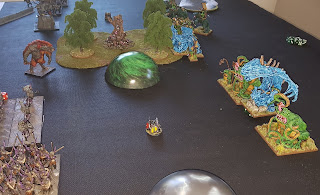 Turn 2 and the Abyssals charge the Archfiend into the Dambusters and move up with the Succubi to support. 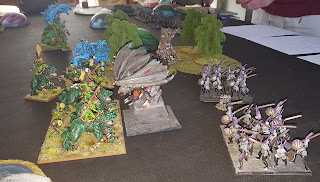 The Fiend gets luckyish and wavers the Dambusters which is rather disastrous for me! 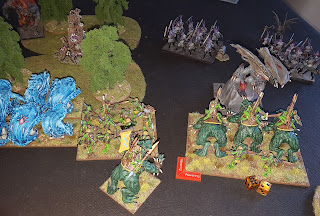 My turn and on the channeling table I get the "Abyssal Vengeance" magical effect, which means I chooose a unit to explodes when it dies, doing D6 Piercing 2 hits to any unit in combat against it. Naturally I choose the Dambusters and put a big explodey marker next to them to remind the Abyssals what will happen if they mess with them... 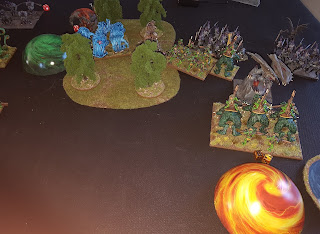 In the centre the Abyssals had thrown their Gargoyles forward to block my Krakens and Greater Water Elemental.  The Gargoyles also had a Cloak of Death Channeling Table result on them which did a point of damage to four of my units, though two of them healed this with regeneration. Not seeing any better option I charge the Gargoyles down and overrrun, and get ready to face the return charges from the  Abyssals. On my left the Treeleapers kill a Hound unit. 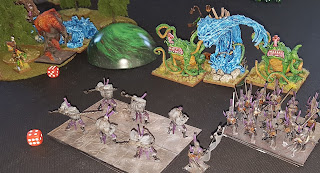 I charge into the Succubi on my right flank but fail to do much to them. 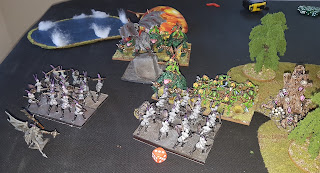 Turn three for the Abyssals and they care not about the exploding Dambusters and the Archfiend and Succubi finish them off taking three and two damage respectively from them. Treeleapers are finished off on my other flank too. Both my flanks have caved in, and I also lose a Kraken in the centre to Molochs thanks to the Magical Vortices either side of them... My Riverguard Sentinel who had jumped over Chroneas to hunt down the Abyssal Harbringer, is unfortunately wavered by firebolts shot by the Harbringer. Things are going... poorly...

My turn three and I kill off the Abyssal Guard which had tried a cunning flanking move on the Water Elemental, and I also manage to finish off Chroneas with the Water Elementals thanks to a Channeling Table result of "Fiendish Frenzy" (grants Elite so reroll ones to hit).

Turn four and the Abssyals smash through my flank units... 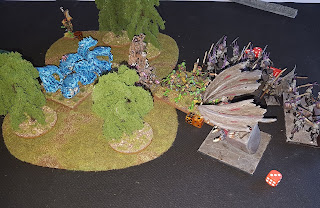 Leaving me with just a Kraken, my Water Elementals and two characters.

I counterattack and do a lot of damage but not enough to break any Abyssal unit... 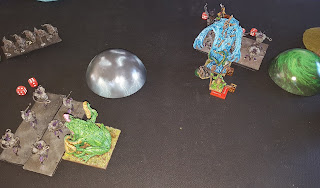 Turn 5 my centre units are killed off but Ektar charges and kills the Molochs, causing them to drop the central treasure chest. Individuals can't carry these loot tokens but it stops the Abyssals having it! Also on my right my Water Elementals have survived against the first Succubi regiment and kill them with help of a Channeling Table result of "Fiendish Fury" yet again!

Turn 6, and the Succubus tries to stop the Water Elementals but fails. They pass through him and finish off the wounded second Succubi unit, grabbbing the chest from them. In the centre the Archfiend kills the Riverguard Sentinel, and Ektar charges him back but fails to do anything. 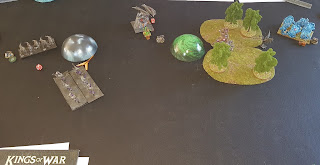 And the game ends turn 6. We both have a single Treasure Chest each, so the game surprisingly ends in another draw (though it would be a win to the Abyssals on killpoints!). 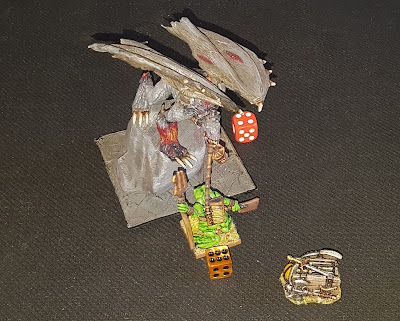 All the extra Abyssal Plane effects means battles here will be bloody! It was looking very grim for the Riverguard until Turn 5 when I got a slim chance for achieving a draw. The Abyssals had a chance to multi-charge my Water Elementals with two Succubi Regiments but favoured doing it with just the one Banechanted unit, that came to within one point of destroying them, but ultimately let them live and regenerate and fight back, killing the two Succubi regiments and snatching a chest for the draw. The Archfiend killed the Sentinel who was aiming for the Hellhounds holding the left side treasure chest, but this also meant it failed to reclaim the central chest.
Another fun game and more learning for both of us and we will be onto the Empyrean Plane (Good) for the third battle!
at 16:08 No comments: