Game 4 of the Abyssals vs Trident Realm Halpi's Rift campaign yesterday, this time in the Ethereal Plane. This features hindering and enabling magical effects rather than more destructive or restorative ones.  Both of us also went heavier on the magic this time. 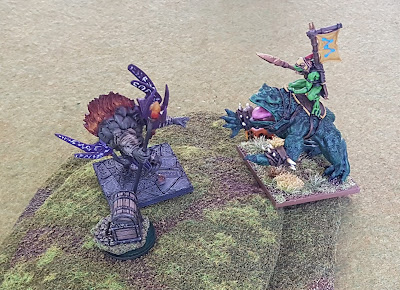 Here's the setup, scenario is Salt the Earth (where you can destroy objectives if you control them at the end of your turn), with me going first.  In the centre and right are two Abyssal Efreets which I want to neutralise if at all possible. One has Fireball 21, and the other Fireball 15 plus Levitation Boots allowing it to double move and still blast things. This plus firebolts from the Warlocks will annihilate my low defence Riverguard if I'm not careful, especially the Treeleapers and Depth Horrors. 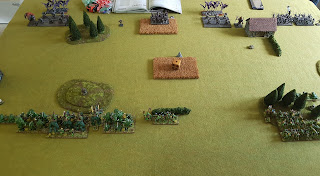 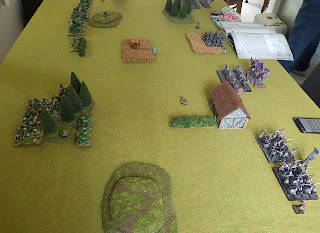 I advance up cautiosly, with the Sentinel and Ektar heading towards the central Efreet, who I have cast the Power Drain channeling spell on to reduce the range of his 21 dice fireball to 6", and I have just stayed out of range of his attacks this turn.

On the right I have lots of frogs hiding in the Dark Forest (extra cover vs range attacks!). Barkskin 5 is cast on the Swarm giving them five extra damage for a turn! However this doesn't matter, the Abyssal Efreet on this flank advances and fireballs the Swarm into oblivion anyway doing an impressive 10 damage with his fireball...

Turn 2 and I charge home against the Molochs doing 10 damage, and 3 to the central Efreet wavering and disordering but not killing these units. The Riverguard Sentinel changes direction and heads off towards the Efreet on my right flank, and Ektar routs a Gargoyle troop with his Krakenmaw Windblast in the centre. 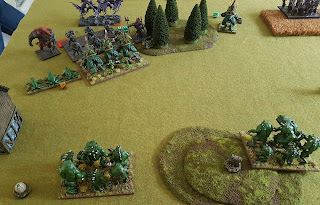 On the right I get stuck in against the Succubi, with all the ensaring units at -1 to hit each other meaning this fight may be protracted... 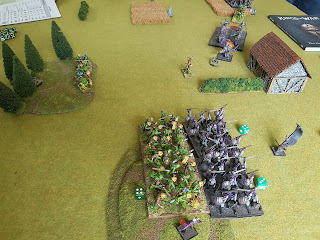 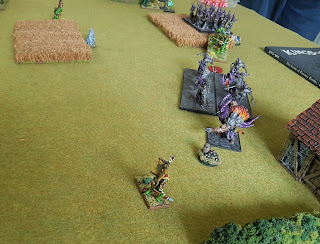 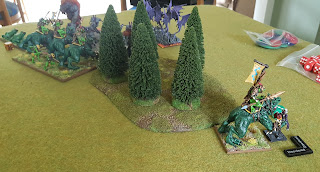 Abyssals turn two, and the Chroneas, Molochs and Warlock ensure my Swarm and Dambusters are both routed, and the Molochs recover 8 of their 10 damage thanks to their regeneration and the Warlocks Drain Life. 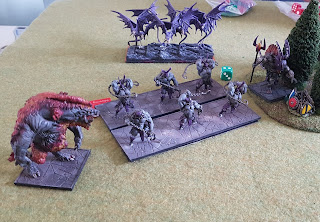 The battle on the right continues, with Channeling Table Spells granting Life Leech to my Treeleapers and then to the Succubi. 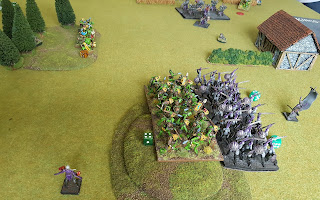 I get the upper hand routing a Succubi unit, and wavering the other one (though it has Fury so can still fight), and my Aquamage uses his Icy Breath to waver the Efreet stopping his horrible Fireball 15 for a turn! 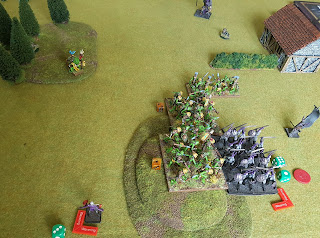 Ektar desperately fights a horde of Molochs in the centre, Depth Horrors kill Chroneas, my Dambuster Sentinel kills the central Efreet, and my Sentinel is killed by the Warlock's magic on my right. 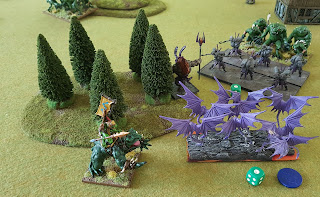 Efreet survives another Icy Breath and he and Aquamage engage in an Icy Breath vs Fireball dual... 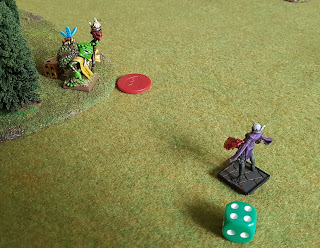 But there can be only one, the Aquamage is vanquished... 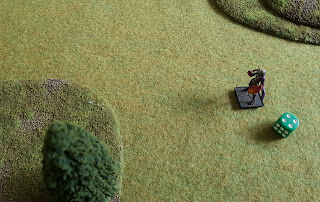 Molochs in the centre are routed by my Depth Horrors and Treeleapers... and I finish off the Succubi on my right but am immediately shot down by the Efreet and Harbringer.

Turn 6 and it will be a win to the Abyssals unless we go to turn 7, which it does.

The Efreet fireballs and kills yet another unit - this time a Treeleaper Troop. 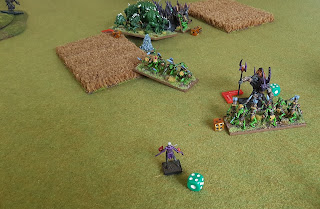 To win the game the Efreet summons one last fireball to smash the Depth Horrors, but it is not quite enough to do so. 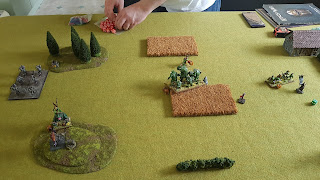 Abyssal Warlock and Riverguard Dambuster Sentinel battle over the last objective, but neither can gain the upper hand in time. The game is a draw! 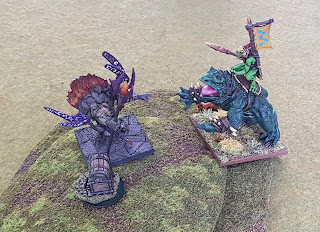 Another close battle, that was a hairs breadth from being an Abyssal Victory at several moments near the end, with my Trident Realm forces just managing to hold on to turn it into a draw.
Lessons experimenting with new toys were learned though. In particular my Aquamage was very suboptimal with too many expensive spells and ones that were hard to use well. Particularly Host Shadowbeast which I was planning to cast on the Sentinel or Ektar giving extra attacks (doubling these with the Dualist ability on Sentinel too vs enemy individuals like the damn Efreets!). But with the short 12" range of this it was never going to happen without exposing my Mage to huge danger. His dual with the Efreet was a miserable end to his incompetent existence in this first game...  I think Celestial Restoration in a list with more regenerating and surging units (i.e. Water Elementals) would be a much better use of him.

Meanwhile the Efreet with Boots of Levitation must be most valued unit this time, racing around blasting away multiple units, and the Diadem Efreet would have also done solid work if he had escaped the Power Drain effect and being hunted. Molochs comboed with Warlocks were also very solid wrecking my units, though Ektar again saved the day, retreating into difficult ground and just managing to hold up the central Moloch unit until he could be rescued by a combo charge. And I finally managed to use Sticky Tongue to good effect.
Anyway another great game and we will play the final 3000 point clash in the Astral Plane once Vaughan paints up a few more units! :)
at 11:57 No comments: