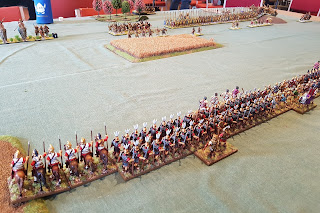 Here's the field of battle. I'm defender which is not what I prefer, but I decide to take advantage of some rough ground to help me disorder the phalanx. My Galatian ally is placed in this to try and delay the phalanx and heavy cavalry wing of the Macedonians, with the aim that my legionaries will engage and destroy the flank of the phalanx.  Opposite my Legions are some Thracians and a weak cavalry and elephant wing. 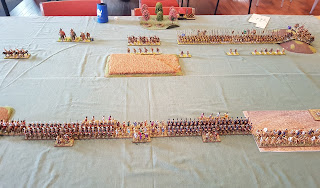 Thracians and Phalanx, painted by Gary Chick for Brian, as is the whole army. Gary Chick seems to be able to pump out armies very quickly. Nicely done! 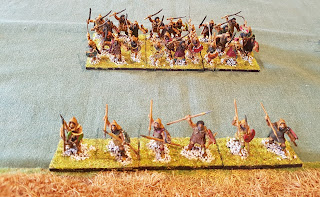 The battle is joined, with Phalanx and Thracians fighting the Legion in the centre, while my Galatian ally holds position, allowing it to be outflanked by Macedonian cavalry. But this outflanking would happen anyway and the rough ground will at least hinder the cavalry and phalanx more than the Galatians.
Rules Note: Rough Ground in ADLG gives -2 to Pike and Cavalry, and -1 to the Galatian Heavy Swordsmen. Given combat factors are generally in the range of D6+1 to D6+3 a differnce of +1 is  significant enough. 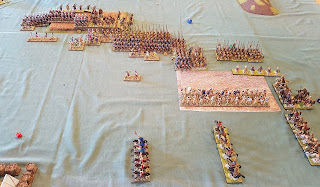 Over on the left flank, my horse archers harass the Macedonian elephants, gradually wounding them, while cavalry chases off the enemy light horse.  Eventually one of the elephants is routed and stampedes into the other one (one in six chance!), which is also finished off. 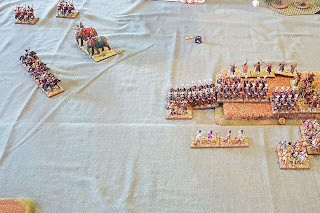 The centre, my own javelinemen are in the centre of the line for once, against the Thracians (neither side penalised by the terrain). My Legionnaires grind forward against the phalanx, and also through the rough terrain where they are somewhat reduced in effectiveness, but still more than a match for the Thracians due to their armour, elite status and extra point of cohesion being heavy infantry. 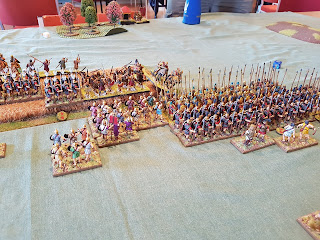 The Galatians on the left surrounded... 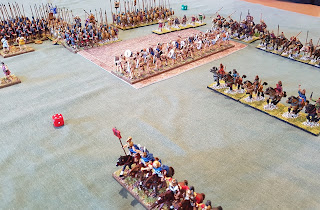 I ran out of my new more discrete casualty counters, and so Brian ends up using his awful "donut" beads on his Thracian javelinmen, terrible! :) 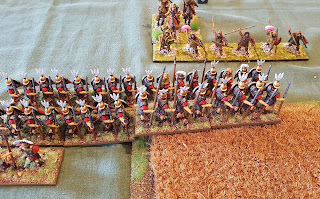 End of the battle. My Galatian Ally infantry has once again been completely wiped out. However their sacrifice on my right has let me win the left and centre and the Alexandrian army breaks, though casualties are heavy on both sides. 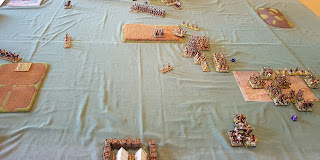 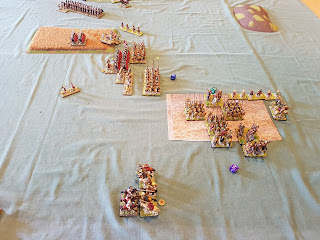 Another game was also being played at the club, Andre's Palmyran against Mike's Macedonians, with victory to the Palmyrans. 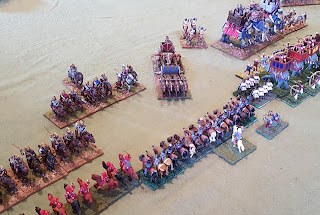 Getting sick of brightly coloured tiddly wink counters for casualties, I made these versions which blend in a bit better. The one's and two's are reversed, and the large splatters indicate more serious trouble! 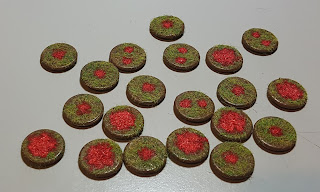