Vaughan and I played our first Halpi's Rift game today, with his Abyssals taking on my Riverguard on the Material Plane.

Halpi's Rift is a campaign supplement for Kings of War. You can play scenarios across a series of Magical Planes, where there are various magical effects in action, and extra magic abilities and mercenary units available.

These magical effects increase as you take more spellcaster levels, but here both Vaughan and I took minimal magic here so the effect was smaller. We used the Epic Dwarf Map, replacing the difficult terrain with freezing lagoons (you get frozen rule, -1 movement if you start your turn in them). The building on the right with the blue roof brought along by Vaughan is the Bard's Taphouse (can't be wavered if within 6" of it). And spellcasters within 12" of centre of table (marked by standing stone) can reroll their spell dice, but take a damage for each dice rerolled. Also start of each turn you roll dice equal to your spellcaster levels on a Chanelling table and you can get various random magical effects happening.

I used the Riverguard Trident Relams army I just used in the Oamaru tournament.

We determined scenario and it was invade (player with most unit strength in opponents half of table wins at end of the game). Here is deployment.

Here's the start of the game on my left flank. The Abyssal army has some shooting units (like the flamebearers and Efreet opposite this flank) and some units also regenerate. So in theory I want to close  into combat as quickly as I can, as my units will do poorly in a shooting or attrition grind. 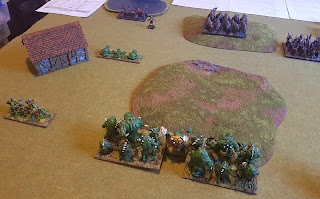 On the right as I push forward, getting ready to take a charge from the Abyssal units, as their wings give them the advantage of first strike. 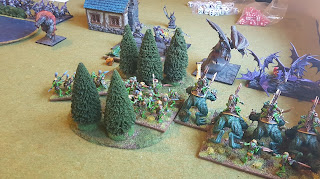 The Abyssals advance and charge...

I win on my left, wiping out the Abyssal units except for the annoying Efreet, losing a Riverguard Troop and Frog Tidal Swarm to Firebolts/Fireballs. On the right, I take out the Archfiend and Gargoyles, but lose all my units except the Dambusters.

The battle for the centre takes place on the freezing lagoon, with two Succubi units and a Seductress killing off a Riverguard Regiment and turning to face my oncoming Depth Horrors and Froghemoth/Kraken. Ecktar tries to hold up one of the Succubi units. 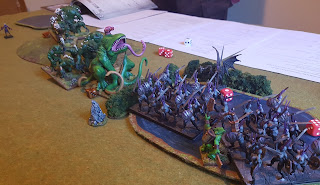 On the right my Dambusters have killed the Archfiend and get ready to take a charge. But Chroneas and the Molochs destroy them handily enough. 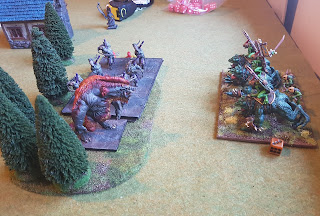 On the left the Efreet almost manages to kill my Depth Horrors with Fireball, but gets unlucky with dice and my Depth Horror Eternal hunts him down. Meanwhile the battle of the lagoon in the centre continues.

I lose Ektar and a Depth Horror Horde, but manage to take out the two Succubi regiments and Seductress as the game goes to turn 7. This means I end with the Depth Horror Horde and Depth Horror Eternal in the opponents half of the table (3+1 unit strengths respectively).

But the Abyssal Moloch Horde and Chroneas are in my half (3+1 unit strengths respectively), and so the first game of Halpi's rift is a draw!

A quick and bloody battle between these forces, with the game going to turn 7 allowing my Froghemoth time to destroy the last Succubi unit and secure the draw.  An interesting matchup with the Abyssals having a range of units that can cause mine much trouble, but also having to deal with all my Ensare and speed. Meanwhile my frog units also found themselves struggling agains the ensare of the Succubi, especially when they were also in the difficult terrain of the lagoon!

The special magical effects didn't have a huge impact on the game. They slowed the Succubi down so they were unable to move as far as they wished, and chanelling ended up inflicting a few points of damage. Especially one turn each the five extra attacks option, that benefited the Depth Horror Eternal in killing the Efreet, and the Archfiend in killing my Dambuster Sentinel.
Next battle will be the Abyssal Plane...
at 14:21