After Games Workshop killed off Warhammer there was much wailing and invocation of curses. Some Warhammer refugees went to Kings of War by Mantic Games, as you can see in my previous initial review and tournament reports. I regard Kings of War as a fine system. Others around the world pooled their efforts to make a copyright free version of rules for their Warhammer Armies - and 9th Age was born.

I haven't followed the development process at all, but 9th Age appears to have been a herculean effort of revision and updating. The most impressive part of it to me is the successful international collaboration to pull off such a task in such a short time frame.  It's what the Epic community did with the Net Epic Armageddon project, and similar things have happened with other GW games, so there was a proof of concept that the idea is workable.

Local Warhammer players here seem to want to play 9th Age, so even though I'm happy with Kings of War I agreed to give it a try. My "Beast Herds" faced up to Mike's "Empire of Sonnstahl" in a 2500 point game last Sunday.

I was impressed looking at the new army list and rules. These are produced to a high standard, well edited and much thought given to balance. When I say balance, I mean that each unit in an army appears much more viable in some role and worth taking. In 8th edition the points balancing was off by quite a bit, and so unfortunately many cool models tended to sit in the box and were only rarely used. For example the Jabberwocky (Jabberslythe) was 275 points in 8th and virtually never taken. It is 125 points in 9th (and also has two optional upgrades) and so it is not a dramatic act of self-sabotage to take one any more. This applies across the lists, the balancing is much better. That doesn't mean everything will be perfect of course, but the margins of error are much less problematic. In addition the rules have some nice new features and problems solved. For a quick look at some differences in the core rules, this you tube review is helpful.

Here's the game at the end of my first move, with beastmen charging towards the Empire lines. I have two Mongrel Raider units and one Wildhorn unit ambushing. 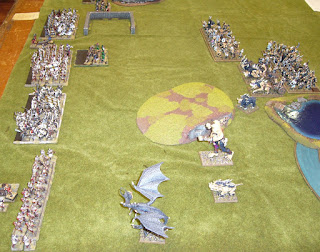 View from Mike's side of table. 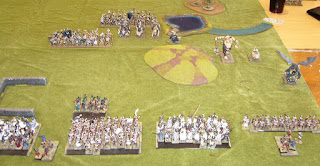 Giant, Razortusk and Jabberwocky charge up the left flank.

Empire moves to counter and shoots dead the Jabberwocky with cannon and crossbow. 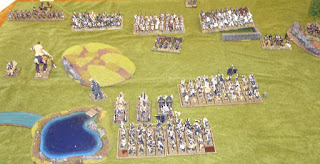 First Razortusk charges into crossbowmen, and rest of Beastmen position themselves for charge. Ambushing Mongrel herds arrive behind the Empire line. My Giant is hit by a cannon and loses two wounds, four remaining.

Charges go in. My Wildhorns on the right are hit by a long distance charge by Flagellants in addition to a detachment. Wildhorns wipe out the detachment and turn to face the Flagellents exposing their flank to the swordsmen. 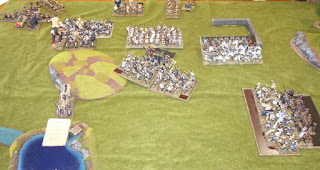 Second Razortusk joins the first in fighting the crossbowmen. Two chariots and Giant hit the Greatswords. I read the wrong chart for the giant, and he squashes a single model when he actually should have done 2D6 strength 6 hits! Aaagh! Yes swing with club for giants does 2D6 hits rather than 1D6 hits. Giants are not only cheaper but hit harder, yay.

Last Razortusk chariot is stuck by a spell. 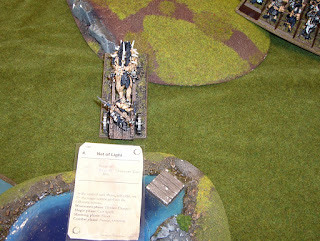 Flagellants and Wildhorns pummel each other. My Longhorns defeat the detachment in front of them and overrun into the spearmen. 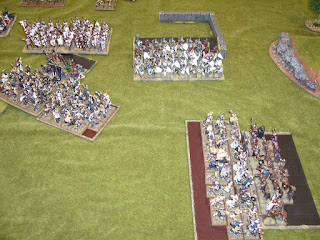 Spearmen slaughter many of the Longhorns and would probably win the fight, thanks to some Empire marshal abilities, but my ambushing Mongrels and Wildhorn herd hit in them in the rear and help out. The Longhorns defending the Beastlord have stubborn ability which is very useful. 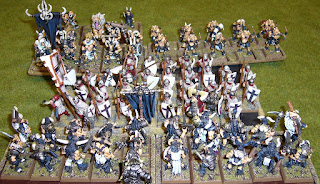 On the left, my forces clean up the crossbowmen and cannon. On the right the remains of my Wildhorns are charged by the Swordsmen. 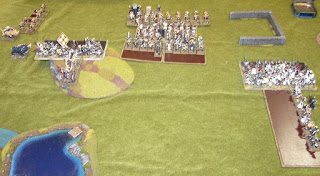 The Greatswords kill the giant and chariots, and are then charged by the next Razortusk chariot. 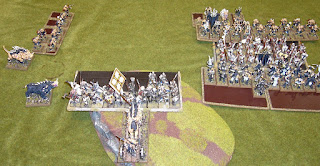 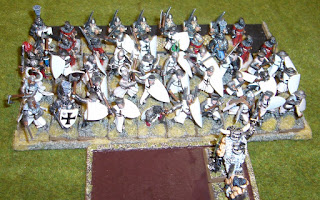 Chariot gets lucky and runs down the Greatswords. 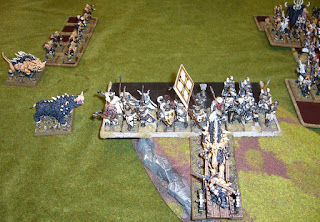 With Spearmen and Greatswords destroyed only the Swordsmen are still fighting for the Empire and Mike concedes. 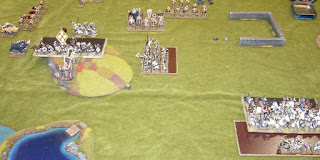 Kudos to the 9th Age team for pulling together this huge project so quickly. This seems like a superior edition of 8th edition, with far more army builds feasible and a range of new tactics and combinations to explore. Highly recommended if you like the Warhammer rules concepts and Warhammer world.
at 13:06