New player Matt requested a game of ADLG so I set one up at the club on Sunday, with two Successor armies facing off across a plain.

Matt actually has most of an army already nicely painted up, mostly Victrix figures.

I loaned him some elephants, light infantry and some pike to make up numbers! 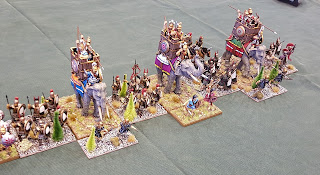 The game starts and I charge my Cavalry towards his Lancers to get in some shooting before I'm charged and outflanked.

His weaker centre holds back a bit waiting for his flanking forces to win. 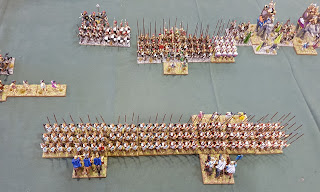 I maneuver my own lancers to the extreme right to hit the end of his line and try and avoid the elephants. 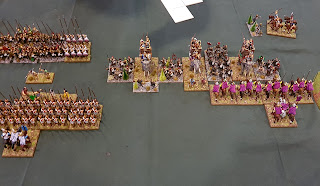 And then I forgot to take more photos! But the situation can be seen below. In summary, Matt's lancers broke my left wing, but then his elephants facing my right wing ended up being unable to maneuver because their general died. My phalanx inflicted enough casualties on his and his army broke, game over.

Nonetheless Matt picked up the rules quickly, and is already planning expansions (not elephants!) and another army. :)