It is done, my new Kings of War Trident Realm Riverguard Army is finished. 2500 points of frogs!

This army was inspired by the new Mantic Riverguard models. These have a great look to them, with more 'realistic' proportions and equipment  (if that's possible), that I prefer to other currently in production fantasy frog offerings. I had a few Warhammer Slaan figures (see here for example of these)  many years ago, and always wanted this 'ancient amphibian' style army. But they were written out of that game, and then the game itself was then written out of existence (though some commendable fan efforts continue).  In any case, I'm very glad this new imagining of a classic fantasy trope has been created. 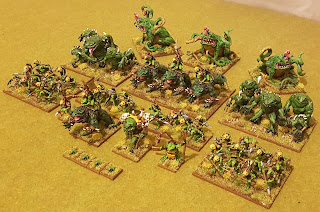 While these excellent Mantic Riverguard figures make up most of the army, I also took the opportunity to go 'full frog', by adding some D&D Slaad and Froghemoths to represent Depth Horrors and Kraken respectively. More pics of everything below! 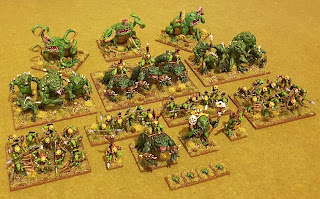 For colour pallet I experimented far more than I usually do in order to come up with something I was happy with, and felt was appropriate to the ancient alien feel of this realm.  In the end I deliberately restrained the selection to a variety of greens, plus earthy browns, yellow ochre (for contrast), bone, stone and bronze, with an occasional splash of pink for mouths.
Colours were the following, which I list here as much so I can recreate it in the future if needed as for any other reason! 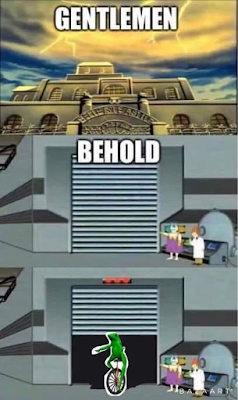 First up the Riverguard TreeLeapers. These are metal models that require quite some assembly, but I think they look great and worth the bother.  I have painted up two regiments and two troops (so far). With the two handed weapon upgrade packs it was challenging even to fit a dozen models on the base. They would be an absolute nightmare to rank up if not multibased. Even multibasing was something of a jigsaw puzzle!

I prefer that models do not overhang the edge of bases, as it can interfere with play by making it hard to position them next to other units, plus it also significantly increases risk of damage to the models. This is especially the case with quite slender models like these Riverguard. Nonetheless they fill up the base nicely and still look like a solid unit, with much animation in the poses.

Riverguard Treeleapers move fast and hit hard, and can jump over enemy units, but like the army as a whole, are also rather fragile... 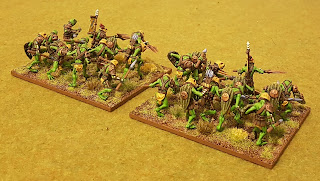 Here are the two Troops. These I did with half the models with the javelin quivers in case I want to use them as standard shooting Riverguard rather than TreeLeapers. 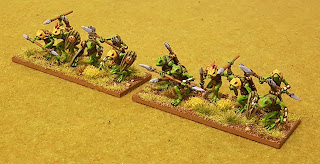 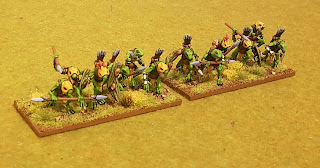 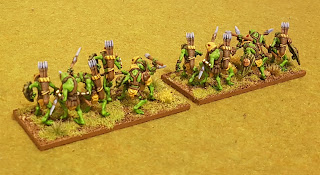 Next here are the Riverguard Dambusters, some truly excellent resin models. In game they can hit like a truck, but are also very expensive and not that resilient. 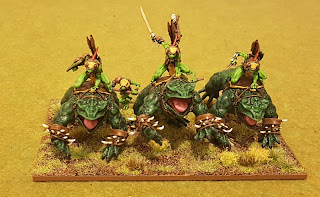 The Mantic box art has the frogs mounts done in red, which looks great and I did also try this at first. However I decided it was out of place with the rest of the theme, so went with this dark green instead. 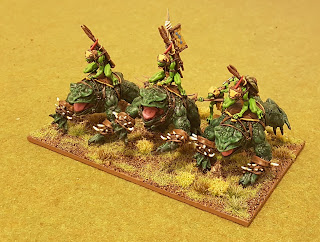 You get a lot of extra bits with the Riverguard kits, so I converted the left and right models slightly by using some of these. The models cry out to be posed in various stages of leaping, and so I did so. 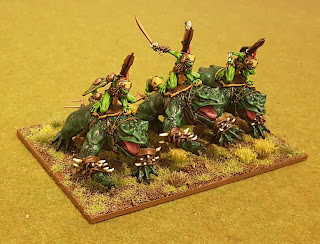 Theoretically being a horde you should have over three models on the base, but given the huge frog models, and what I said about the footprint of the base, I decided to just add some normal Riverguard models to the base for the other models. These also have large tridents suitable for prodding the frogs forward... 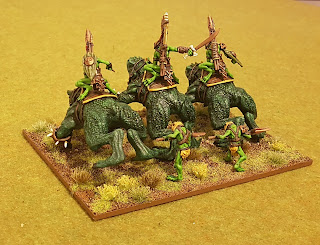 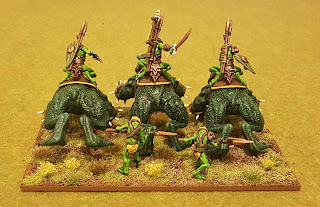 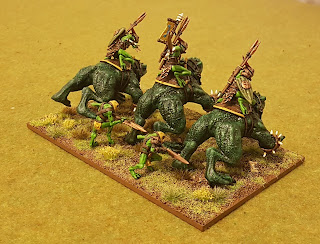 Here's a side profile of the unit showing the size of these models. 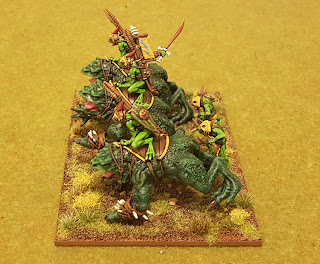 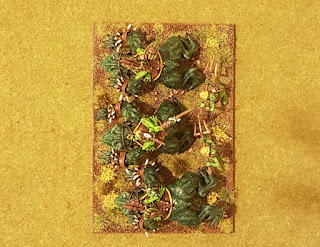 Next the characters. RiverGuard Sentinel and Riverguard Sentinel Dambuster on the left. The two right models are a D&D Slaad who will be used as a Depth Horror Eternal, and the Reaper Bufo Figure who will probably be used as the special character Ekter to provide some much needed inspiring ability and resilience. 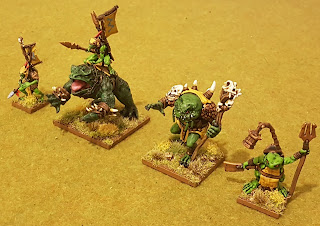 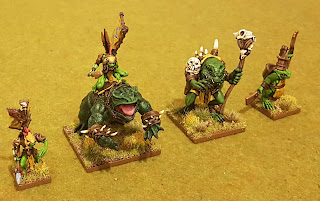 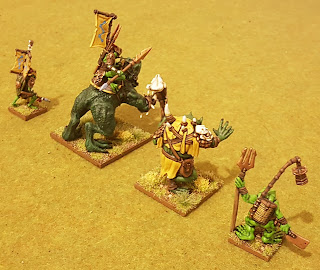 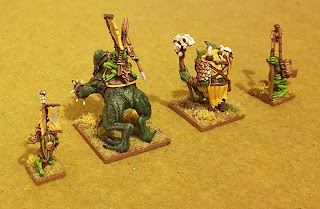 The Bufo figure is appropriately very stout compared to his Riverguard compatriot, so looks like he would not be jumping over any enemy units. This also provides some  justification for the extra Defence Ekter's profile has I guess. Here too are some Poison Frogs (that you get on the Mantic Naiad's Sprue), in case I want to take that upgrade. It's a one use item in the game that gives you Brutal ability for a turn. 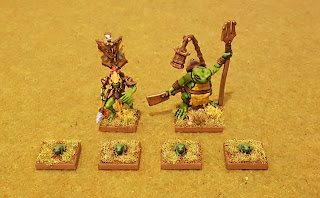 Next up the Depth Horrors or Deep Ones. These are D&D Slaad figures from a variety of manufacturers, including some resin prints. I just googled "Slaad miniatures", "Slaad 28mm" and started buying what showed up. As they started arriving from around the globe, I realised there were dramatic variations in size of the models, but this just adds to the chaotic look of these hordes, so I happily just stuck them all together!

Terrifyingly cheap and furious in close combat, though also quite vulnerable to archery and spells. 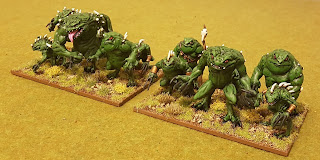 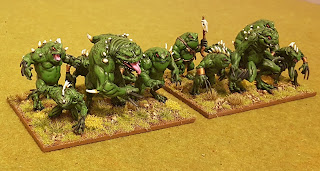 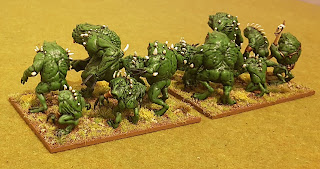 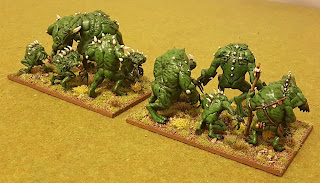 And here with the Depth Horror Eternal, inspiring them with the promise that if they follow him one day they too shall be able to wear pants.

And lastly the Kraken, represented by D&D Froghemoths. Quite a goofy monster, a mess of frog, tentacle and gaping mouth that was a joke at first, but then became part of D&D lore due to popularity. Much repositioning of tentacles occurred to make the poses different. In Kings of War, a scary  crushing, ensaring, wild charging, regenerating beast. The only thing that could be better than a Kraken is three Kraken.

Likely Bufo/Ekter will have the job of looking after this lot in game... what an honour for him.

So pretty pleased with how these turned out, definitely one of my favourites amongst projects in recent years. I'm looking foward to getting them on the table, including at the local Oamaru Muster event next month.  I also have have many questions about how to use this army effectively. In Kings of War it has many unique but expensive abilities, that will require quite some finesse to use well. Will it hop to honour? Or will it be shot down by Archery, ridden down by Knights, smashed by Giants, and crushed by Dragons? And speaking of Dragons, will it feature on the Death by Dragons community update? :)
Only time will tell, thanks for looking! :)
at 21:24