Third game in Halpi's Rift Campaign - the Empyrean Plane. This is the "good" plane with forests that heal units in them, and chapels that inspire your nearby units (so allowing them to reroll break tests if they don't already have inspire). Plus the channeling table helps and heals your units. The magic is a bit weird in this one as your spellcasters heal if they are in the opponents half of the board, but they take damage equal to the turn number, and increase their spells by a level if on your side of the board. 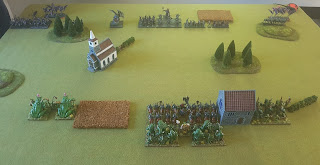 I continued using my Trident Realms and Vaughan his Abyssals, though with changes to lists. My Trident Realms brought along some Orc allies, given I'd just painted them and was keen to use them!  The Abyssals took a Warlock and more magic than last time.

Scenario was control, so the table divided into six 2 foot square sectors, and whoever controls the most at end of the game wins. The central sector of the opponents deployment zone is worth two points to you if you hold it, and other sectors are worth one point each.
With a smaller more punchy army I vacillate over deployment, but eventually put my Depth Horrors behind the Orc Gore Riders to help protect them from shooting, and to be a second wave to hopefully smash through the centre and capture this more valuable sector.

I win first turn and advance to charge range.

My big formation of death in the centre! 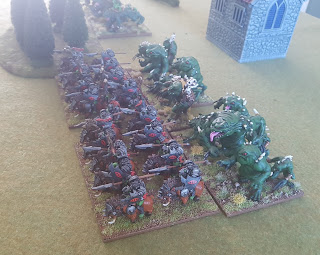 The Abyssals charge and position themselves to flanking or support positions.

Hellhounds do five damage in melee to my left Gore Riders, and fireballs and firebolts do six to my other Gore Riders. Luckily I have a Flagger here to help boost morale though! 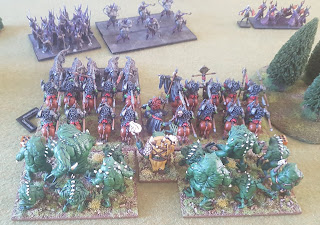 My turn, and I kill the Hellhounds with the first Gorerider Regiment, and the second Gore Rider Regiment charges and damage the Molochs. My Depth Horrors charge through the forest and kill a Flamebearer troop. On the right, my Sentinel charges and destroys a flanking  Gargoyle Troop.

Magic rockets back and forth. My Orc Godspeaker fireballs and wavers the Efreet, but then the Warlock blasts and kills him in turn. 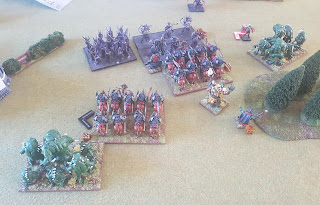 On the left my Kraken and Kyroqsh have got themselves into an unfortunate position and are surrounded, and the first Kraken is killed. 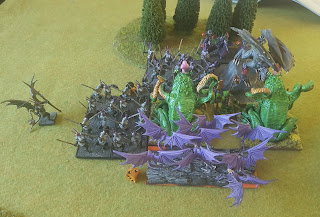 The Abyssal Guard in the centre waver my Gore Riders and my Depth Horrors behind have to spend a turn sidestepping to their left to get into position to charge.

Molochs kill my other Goreriders, but are then finished off by my Depth Horrors, who have managed to survive a flank charge from the Hellhounds. 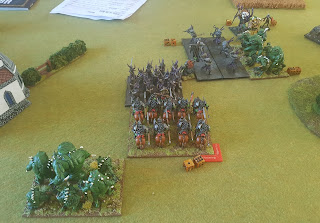 My other Kraken and Kyroqsh manage to kill the archfiend but then go down fighting attacked both flanks. 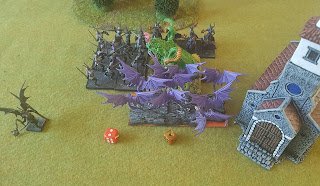 In the centre, the Warlock has blasted away a Depth Horror unit, and then been killed by my Dambusters, which join the other Depth Horror unit in attacking the Abyssal Guard. But a double one for the break test and the Guard stand firm and regenerate about a dozen wounds in their turn 5! 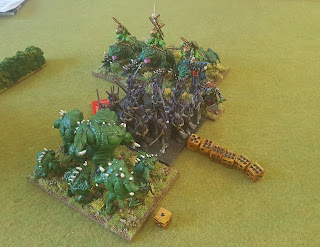 And turn six, and the game ends. I finish off the Abyssal Guard, but it is not enough. The Abyssals have captured both left sectors, and the bottom right in photo below. I have the bottom central sector and top right, and the central top sector is contested. Score is 3-2 to Abyssals! 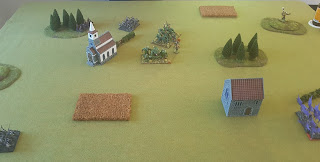