Kings of War: Review - plus Herd vs Undead game

A sad event for Geekdom in 2015 was that Games Workshop (GW) killed Warhammer Fantasy Battle after 30 years. They replaced it with a largely incompatible, and even further overpriced game called "Age of Sigmar". Age of Sigmar seemed to emphasise fantasy versions of Space Marines (TM) bludgeoning each other with hammers - which is ok if you like that sort of thing I guess. More problematic was that no provision was made for the popular sort of tournament games where you can just turn up with a certain number of points and expect a roughly balanced sort of a game.

Here in New Zealand Warhammer Fantasy Players have been deserting GW in droves, many finding accommodation in friendlier Mantic waters. Mantic is a company that has released a game called "Kings of War" (KOW), now in its second edition recently released. It's basically a more streamlined version of Warhammer Fantasy Battle, with products and figures that are also much cheaper than GW. It's the sort of game GW might well have evolved Warhammer Fantasy Battle into, (cheap prices excepted), if Mantic hadn't already got to the design first. The rules designer of Kings of War is in fact an ex-GW designer. Kings of War has already taken over the Warhammer Fantasy Tournament scene in the North Island in New Zealand, and will likely do so in the South Island very shortly.

I purchased the Gamer edition of the KOW 2nd edition rules, and the Uncharted Empires army list supplement a couple of weeks ago. The Gamer edition is a cheaper softcover version of the rules that leaves out all the background story material, instead just supplying rules and army lists (which is all I want, having no desire to read more stories about elves, dwarves etc). The Uncharted Empires supplement is an interesting phenomenon, consisting of army lists that enable Warhammer players to use their armies in Kings of War. Smart marketing from Mantic! I'd also note that it costs less to buy ALL the rules and army lists for Kings of War 2nd edition than it costs to buy a single GW codex that covers a single army!

Also there is an excellent electronic Army Creator for Kings of War 2nd edition at the following link, which makes choosing armies very easy:
http://kow2.easyarmy.com/

To get the hang of the rules, Basil and I played our first game of 1500 points today, using the first scenario in the book - where both sides are just trying to kill each other (nice and simple). Here's an account of that experiment and some thoughts on the experience.

I took an army much like I would use in Warhammer including some big monsters (which kind of suck in the Warhammer Beastman list). I also decided to just take more units rather than lots of magical upgrades or heroes. 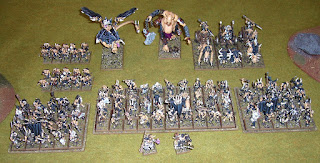 Basil reported that he "took a bit of everything", to try it all out, and also quite a few magical upgrades. 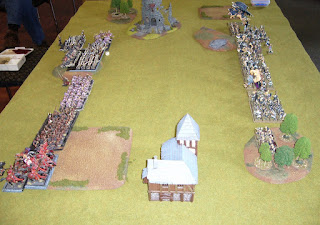 Right of my line.

Left of my line.

I win the dice roll for first turn and elect to go second. My Tribal Hunters on my right have already done their vanguard move after setup to advance to a firing position. The Undead start to shamble forward, with the Necromancer and Vampire Lord surging a couple of units forward a few inches. Most Undead can't double move, instead relying on the Surge spell when needed (each casting dice rolling 4+ moves the unit 1 inch forward, the Vampire Lord had 3 dice, the Necromancer 8 dice for this spell). 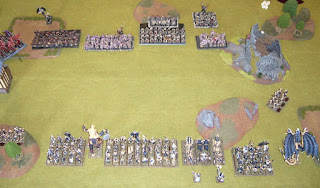 I don't advance, except for the Chimera flying over the tower on the right, and Longhorns and Shaman advancing onto the hill slightly.  My reasoning is that Basil has no shooting (except a low level lighting bolt spell) and I do, so he has to advance or I'll just keep wounding him, and also I want him to advance into my charge range rather than vice versa.

The Undead shamble forward again, with the foot troops getting in the way of the Soul Reaver cavalry, who turn and start heading towards the other side of the battlefield (!) 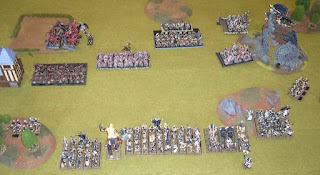 I charge into the undead line with just about everything!

First off I have a flanking attack with the Chimera (double dice, so 14 attacks, needing 3's to hit and 2's to wound, and rerolling 1's to wound because of Vicious trait)! 11 wounds inflicted but they survive (2d6 + 11 needing 23 to rout them, and wavering them not possible because they are undead). 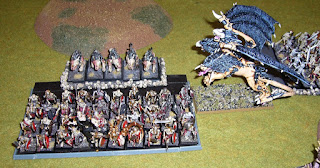 Next my Chariots and Longhorns do massive amounts of damage and obliterate the already wounded Zombie Trolls. My chariots retreat back 3 inches. (I had also Banechanted the Longhorns - which as it turned out didn't do anything as they already needed 2's to wound!) 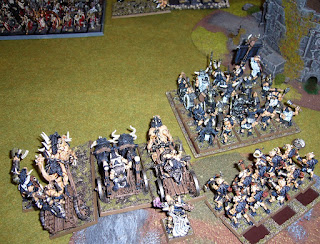 In the centre my Tribal Warriors inflict 11 wounds on the Ghouls but they survive (2D6+11 needing 19 to waver them, or 21 to rout them). 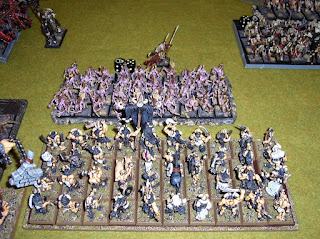 On the left my Hunters, Longhorns and Brutox do 11 wounds to the Zombies, who also survive (2d6 +11 needing 22 to rout them). 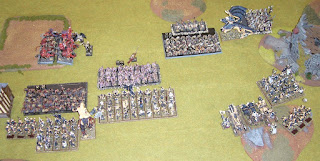 The Undead Countercharge. On the right the Skeletons do 3 wounds to my Chariots, and recover 2 wounds with their Lifeleech ability. My centre Horde takes 8 wounds from the Ghouls, and Longhorns on my left take 3 wounds from the Zombies. Both these undead units also regain a wound due to Lifeleech.  My Chimera has also taken 3 wounds from Lightning Bolts by this stage of the game. All my units hold though.

I come back at the Undead. My Chieftan, Chariots and Longhorns wipe out the Skeletons horde, with the Longhorns managing a devastating flank charge here. My Tribal Warriors on the hill fire over the Longhorns at the Necromancer but miss. 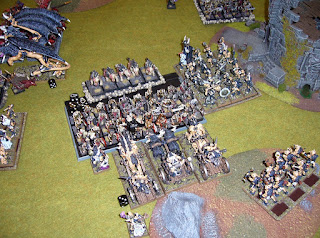 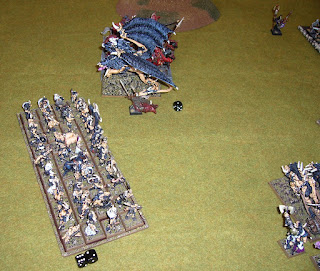 On the right I inflict heaps of damage on the Zombies, but roll a double 1 for the nerve test so they hold! 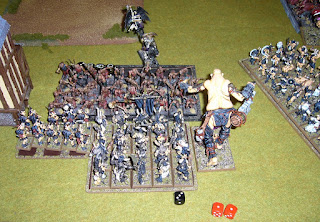 The Soul Reaver Cavalry get into combat at last and destroy my Chariots. The Skeleton Regiment inflicts 3 wounds on my Longhorns but they hold. The Vampire lord inflicts 5 wounds on my Tribal Warrior Horde for a total of 13 wounds and wavers them (meaning they can't attack in my turn). 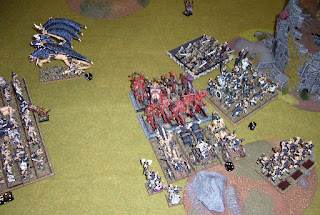 The Zombies wipe out my Tribal Hunters on my left. 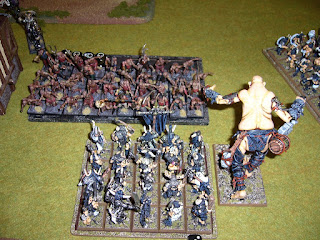 In response I manage to destroy the Zombie Horde, and the Brutox and Longhorns pivot getting ready for the Vampire and Soul Reaver Cavalry who I expect will break through my beaten up Tribal Warrior Horde in the next turn.

My Chimera chews on the Undead Standard Bearer but he survives. 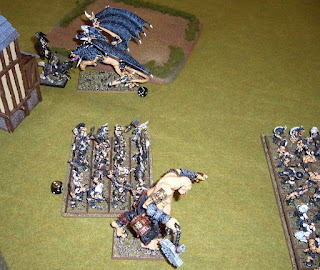 My Chieftan (Bane Chanted by Shaman) and Tribal Hunters charge the flank of the Soul Reaver Cavalry and inflict 3 wounds. I made a mistake here by doubling the attacks of Chieftan, but unlike all other units, individuals are not supposed to double attacks for flank charges (nor triple attacks for rear charges). But this mistake had little to no effect on the game in the end I think. 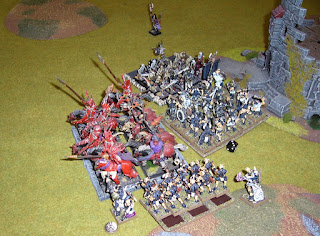 I'm missing the picture from the Undead turn, but Vampire Lord and Soul Reaver Cavalry run down my Tribal Warrior Horde as expected, but then the Soul Reaver Cavalry is in turn destroyed by the Brutox, Longhorns (with Bane Chant cast on them), and my Chieftan. My other Longhorns destroy the Skeleton regiment, and the Chimera eats the Undead Standard Bearer. 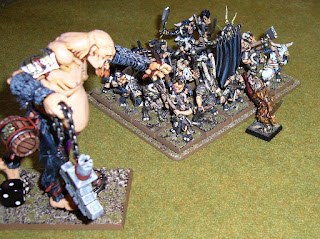 ...but then he is splatted by the Chimera (Bane Chanted), Brutox and Chieftan...


And to add insult to injury my Tribal Hunters get lucky and shoot down the Necromancer!

Game over - last turn and the Undead force has been completely wiped out! I've lost my Tribal Warrior Horde, my Chariot Regiment, and a Tribal Hunter Troop. 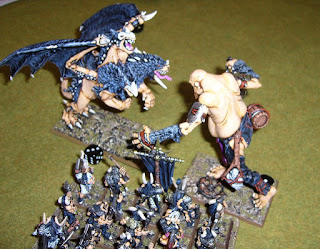 We both enjoyed this first game of Kings of War which is the most important thing of course. As to tactical lessons learned - its hard to say after only one game. However, I think Basil didn't really get the best from his force, blocking out his powerful scary Soul Reaver cavalry and Vampire Lord for most of the game, and being defeated in detail rather than co-ordinating attacks. And as he said he also needed to choose spells so they were more useful to the battle plan he is aiming for with his undead.

The Herd were satisfying to play, moving fast and hitting hard, but being relatively fragile when something smacks them back. All the units I used seemed to have a useful role of some sort. The big monsters actually felt dangerous which was a nice change. Chariots were less devastating than in Warhammer, but also appropriately cheaper. Ideally you'd use their speed for flanking rather than frontal charges if possible perhaps. The Chariots also had bows which I forgot to use in this game!

Combat in Kings of War is different to Warhammer in that you only fight in your own turn, you don't remove casualites, and you retain full fighting strength until wavered or routed (wavered = lose attacks in your next turn unless you have 'Fury' ability, and routed = destroyed). In theory this sounds quite different to Warhammer, but the overall effect is similar and much easier to calculate and resolve in my view.

Another difference is that there are only limited spells in Kings of War, but they are well thought out and balanced and tend to act as buffs rather than super powered obliteration. Spell effects let you damage an enemy unit (Fireball, Lightning Bolt, Breath Weapon), or heal one of your units (Heal), or move an enemy unit (Windblast), or move your own unit (Surge on 'Shambling' units), or they boost the strength of one of your units in combat and shooting (Bane Chant). What spells you can select depends on your army. There's also 40 general magic items plus special abilities for specific armies. Probably more will be added in future editions, as has been the case in the shift from 1st to 2nd edition, but they have kept it to a select and tested assortment which is a wise idea I think.

In summary, Kings of War plays very smoothly and is intuitive and easy to learn. I think it's safe to say it looks like being the new Fantasy wargame we'll play (and some of the watchers of the game too).  I'd even expect Kings of War to spark a surge of interest in Fantasy Gaming here, as it will certainly be much easier to teach new players, and also much cheaper for them to get started. There is also a wide variety of army lists and units, that can be further specialised with the various magical items as desired, so that interest is maintained for more experienced players.

So good work Mantic. I might even buy myself a Games Workshop Ghorghon to use as my Brutox in future games so even evil old GW will make an extra dollar or two from this venture. Though having said that I notice that for the price of a single GW unit I could instead buy an entire starter army of Mantic miniatures! For new players at least this sort of decision seems like an easy choice to make.
at 21:12