One of the first board games I played was Space Hulk, over twenty years ago. A classic asymmetric battle between heavily armoured humans with guns (Terminators), and lightning fast teeth and claw aliens (Genestealers) in claustrophobic ship corridors. Excellent simple rules. When GW re-released this game with superbly re-sculpted figures a few years back I picked up a copy.

I also added a few more Terminator figures to the Space Hulk collection. I've just finished painting them up as a short diversion from painting hundreds of Napoleonics. This will let me play a big game of Space Hulk, or together with a couple of tanks I added in there's also enough for about 2000 points under the new 40K 8th edition rules. 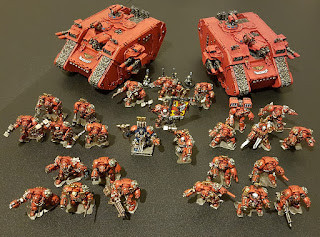 I haven't played 40k for well over a decade, and not really much at all since Rogue Trader 1st edition (yes I'm that old). So no idea how well an army like this would perform now. It doesn't have many units to hold objectives and so on but I figure each unit must be pretty awesome (but who knows). As to why I'd even consider giving it a go, general feedback I've heard on 8th edition 40k is that is a big improvement over previous editions (not that this would take much of course...). See this review for example, for a summary of the change in direction and philosophy 8th edition represents. Sounds like it might be worth an occasional diversion, or maybe even as a gateway drug to introduce people to other wargames.


I'm also not sure about the basing for 40k, as I see Terminators are sold with 40mm round bases these days. I bought some 40mm bases for these, but then realised I wouldn't be able to still use them for Space Hulk if I put them on those bases so that's a no-go. I think I still have Rogue Trader era Terminators on 25mm bases somewhere too. Hopefully there's no rules about bases having to be a certain size in 8th edition or else they'll just have to face off against my Genestealer Cult. 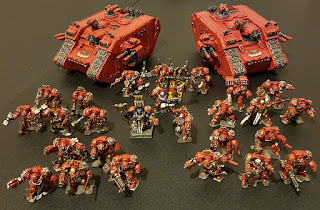 Anyway, onwards with a few more close up pics of these models. They are certainly not painted to the standard you see some players paint their models to these days, but I'm happy with them and the way they look as a force. 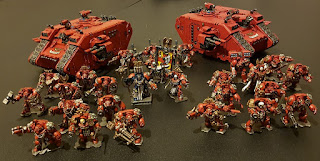 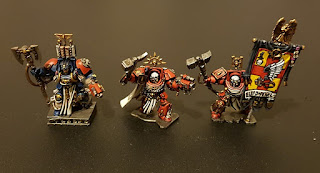 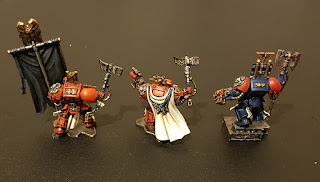 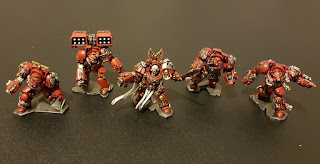 Extras: Flamers to replace the Assault Cannons or Cyclone if desired. Plus a Terminator with Lightning Claws, and four Teleport Homers.

And lastly the two Landraiders. Standard configuration, which I figure will give the rest of the force some long range anti-tank capability. The hatches are loose so they can be swapped around. 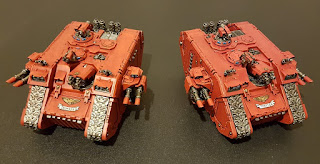 I know it's 40k so this is a stupid thing to say, but it's always bugged me a bit that the design seems such a poor one for an actual tank. It's a weird combination of tank destroyer and shock assault transport. An anti-tank round trap with setup of the central Heavy Bolter turret.  Side turrets with limited fields of fire like a World War One tank (though at least I didn't put them at the back where they also block the access doors like the standard setup!). You'd think humanities finest could do better really - and indeed they seem to have done so with the new 8th edition Repulsor Tank which at least has a top turret. Of course humanity is also trapped by superstition and tradition in the background, so why not stick with this World War One design. Plus I painted them bright red as well so who am I to criticise. :)

Having painted them up though, I actually quite like the look of them. 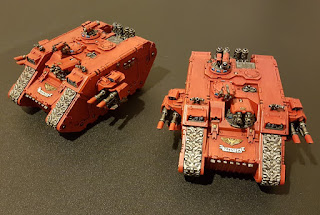 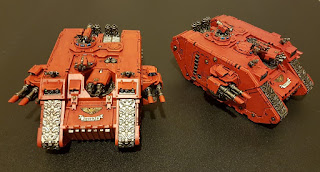 Some rear views. Could do with some Blood Angels vehicle iconography being added, but not sure where to get them from. 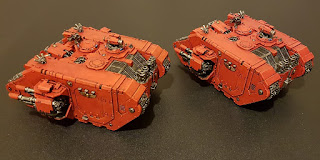 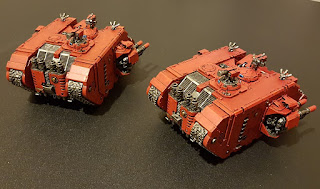 These models have turrets and front doors that are designed to be moveable after the model is built. And as you pull down the assault ramp, the upper part of this also lifts up due to a clever little mechanism hidden inside the model.  Kind of neat in a big kid kind of way. 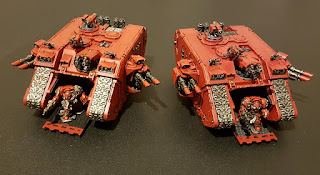 Alright, thanks for looking! I also have a bunch of the Genestealer Cult figures to make a suitably impressive force to oppose these Terminators, but not sure when they will be done.
at 21:28