More Dwarf units painted, another unit of Shieldbreakers, and one of Rangers, four Mastiff packs, a Lord and a Ranger Captain. Lord and Ranger Captain are from the new Mantic Vanguard range, and I think the Ranger Captain is the first female Dwarf they have made (no beard). 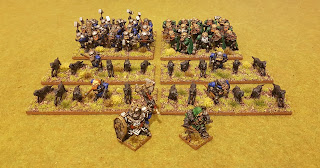 Mastiffs are from Warlord Games, who must wonder they are so popular given all the Dwarf players using them... 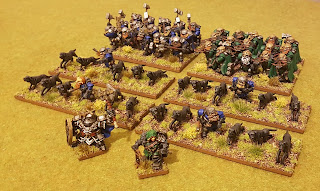 The new Ranger unit has gold helmets, and everyone of them is wearing a cloak, to mark them out as Herneas' Hand-Picked Rangers. I also put the spare head from the Warsmith model on the leader. 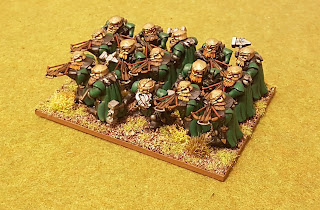 This brings the grand total painted over the last six weeks to 2000 points with some options!

I also did up two mastiff packs for my mate's Imperial Dwarves, who have more of a red theme across many units, and gold rather than silver armour. 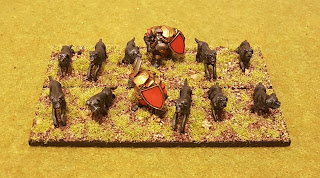 Waiting unpainted a number of other units to add - including Brock units for Free Dwarves, and a number of heavier units to convert it into an Imperial Dwarf army if I want.