Another game of To Ur is Human played a couple of weeks ago, just got around to posting. Once again we used the hidden deployment shown in the last game.

Here is the first turn with my forces rushing up the field. Andrew had painted up more battlecarts, giving us an extra squadron each (2 in his force and 3 in mine), plus some extra foot. Once again he had advantage in heavy infantry, while I had the extra squadron of battlecarts, plus more missile troops.

I throw my Battlecarts into the fray again, causing disorder in the enemy lines, while Andrew keeps his in reserve to try to counter...

The left is contested with my lights falling back before charges by Andrew's forces. 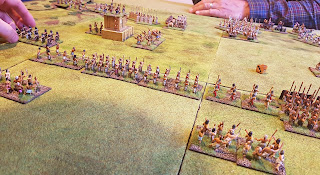 My Battlecarts cause chaos once more.

Though the first squadron comes to sticky end in the middle. 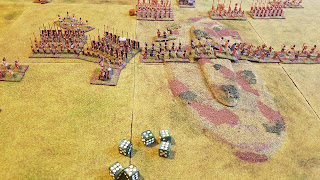 On my right Andrews forces are concerned about advancing up the difficult hill, and this hesitation means more arrows to the face, and my Battlecarts chase his lights away and swing around behind his left flank. 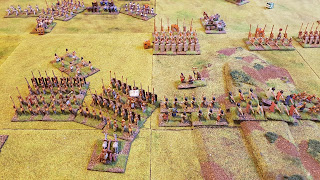 Andrew's Battlecarts struggle to react to my impetuous Battlecarts which are rushing all over the place with follow up and charge moves.

On my left Andrew's spear have been forced back onto a hill, while the rest of his force is in a bad way.

In the centre my battlecarts are attacking from both flanks, and my archers pour fire into his units. 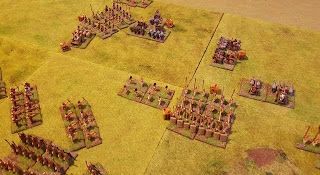 And over half of Andrew's army is lost and the force defeated. 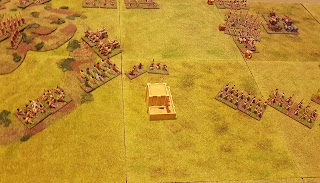 Another interesting game using this system. Battlecart use is quite different compared to some other ancients rules we have used. They seem mainly useful as something to disrupt and cause absolute havoc in the enemy line, being difficult to manouevre and difficult to react with. Almost like expendable scythed chariots in other ancients systems, except that they are also as tough as your best heavy cavalry!  More useful as an attacking than a reserve force I think. Also on my right here, Andrew held back when I think just charging the missile troops (who don't last long once you get among them), would have been preferable to being a pin cushion. My feeling is that Battlecarts and missile troops are more points efficient than the heavy infantry, but that is just an impression after three games.