After the last two defeats at the hands of the Tau, here and here, the Imperium sent in the Marines! Those Tau need to be stopped! 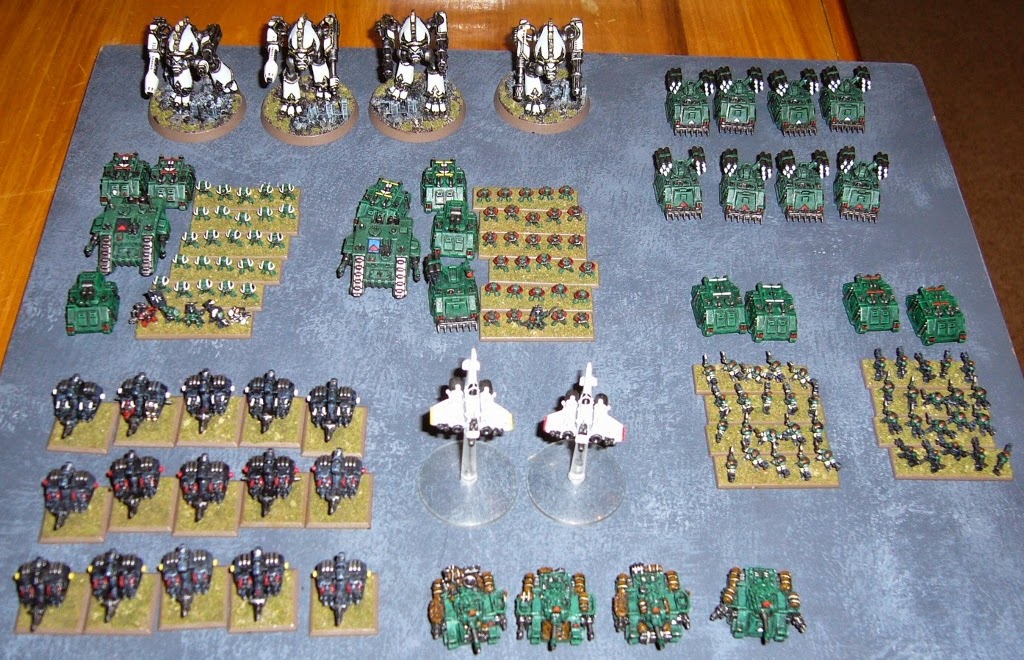 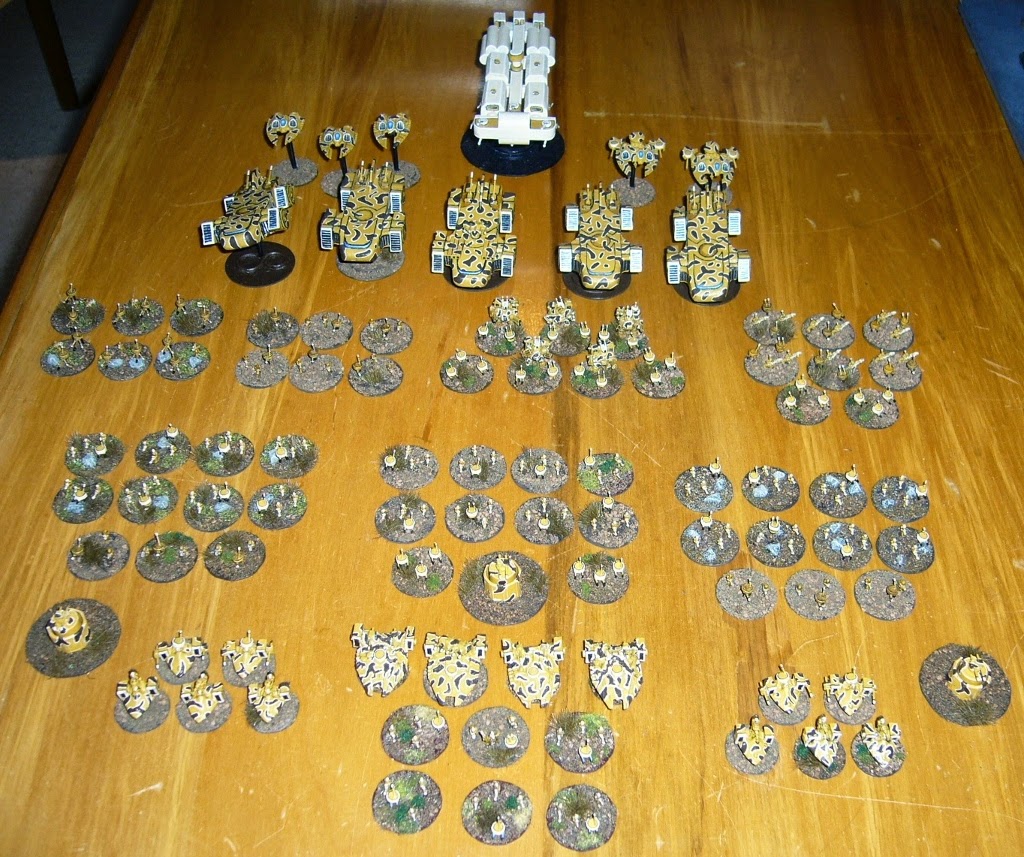 Here's the setup, I garrison my Scouts and Landspeeders mostly across the midline, as I know Andrew has little on the table given all his air units, and I want to get up and in the Tau's face ASAP and put the pressure on! 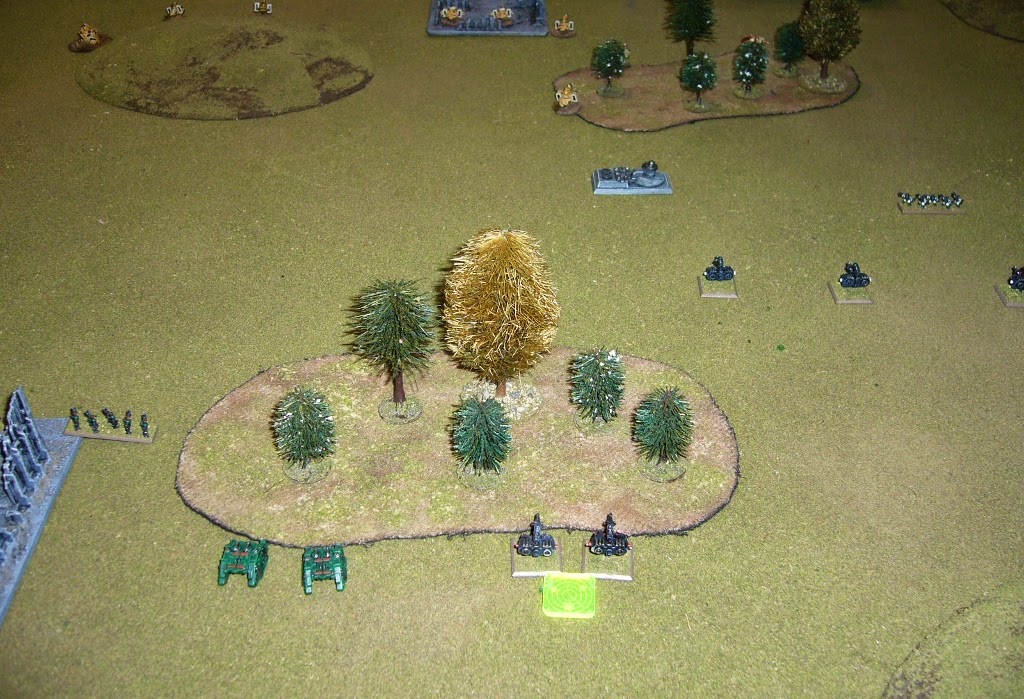 I attack strongly on the right flank, coming close to wiping out a firewarrior formation, as Lanspeeders firefight following intitial attacks from Warhounds and other Landspeeders. 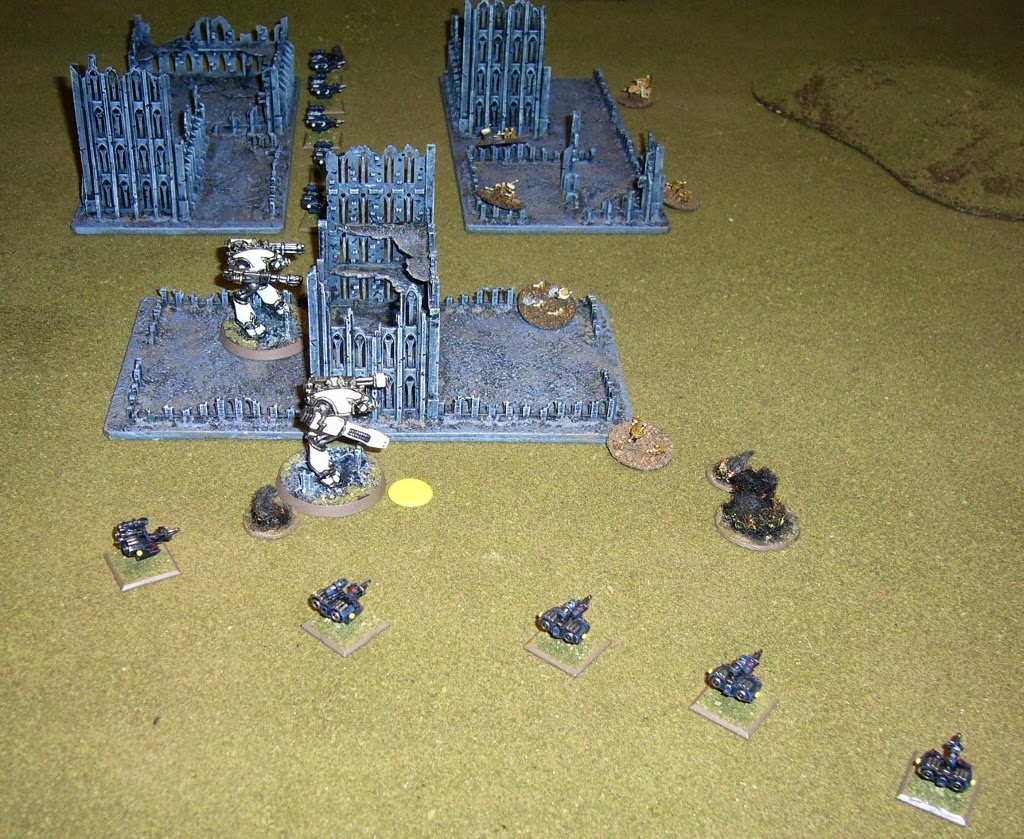 I also push forward in the centre with Predators... 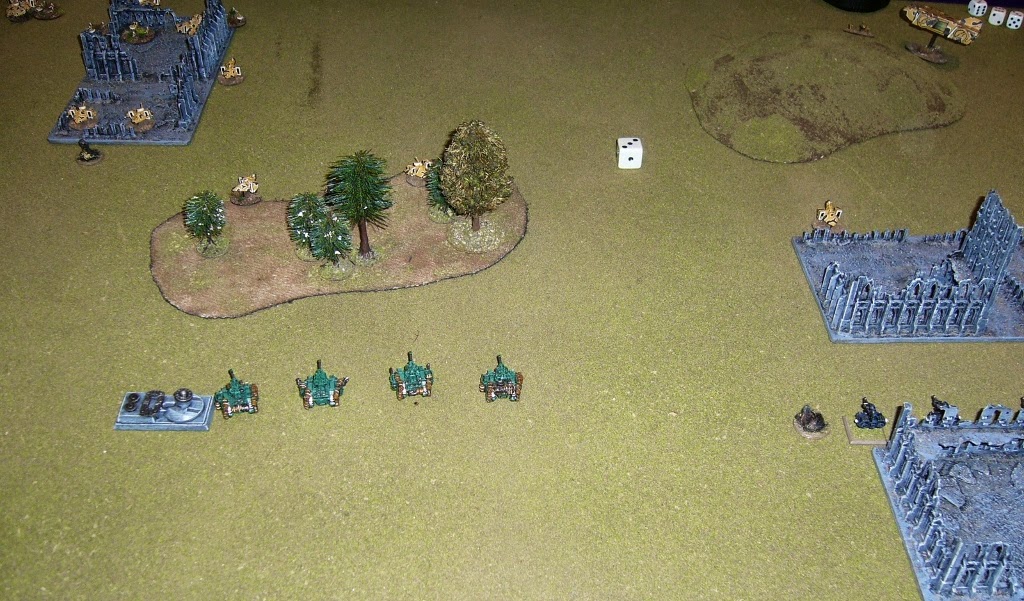 Which are counterattacked by an air drop of crisis suits. Whirlwinds have also raced forward heroically, to be able to reach everywhere on the table with their barrage and to stay close to other units for protection what with all Tau air power. 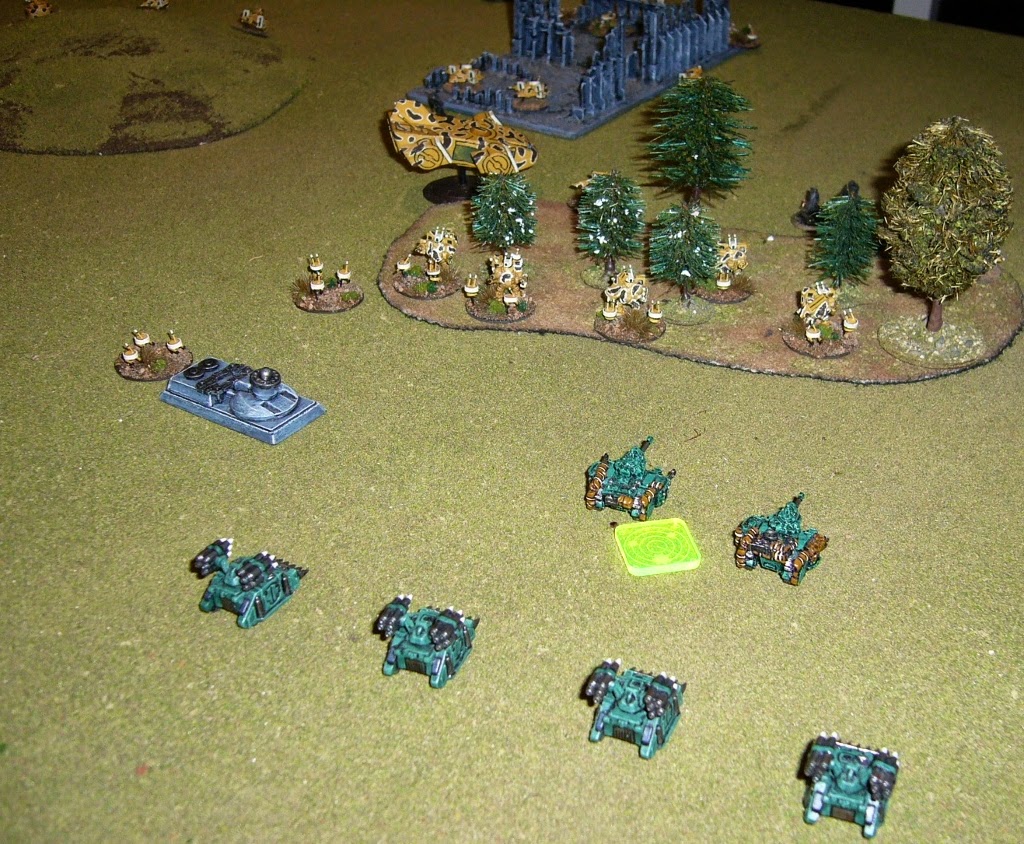 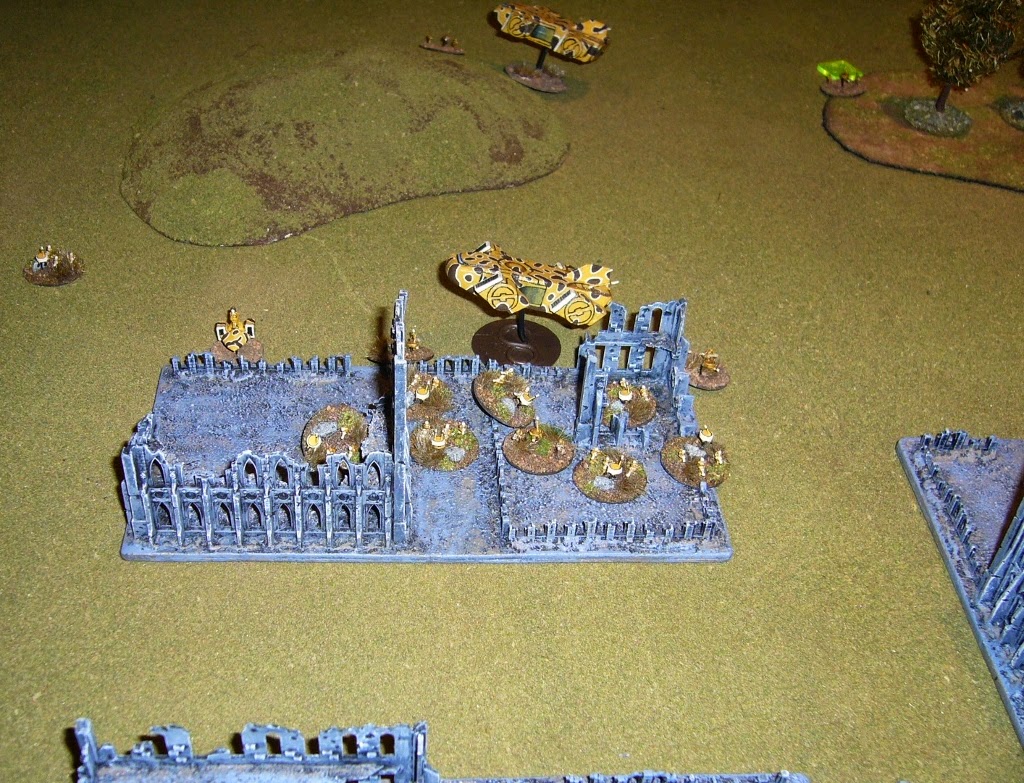 I reinforce the centre with Tacticals, my one Hunter AA tank reaching the centre of the board to take pot shots at all the disengaging Orcas in the end phase. 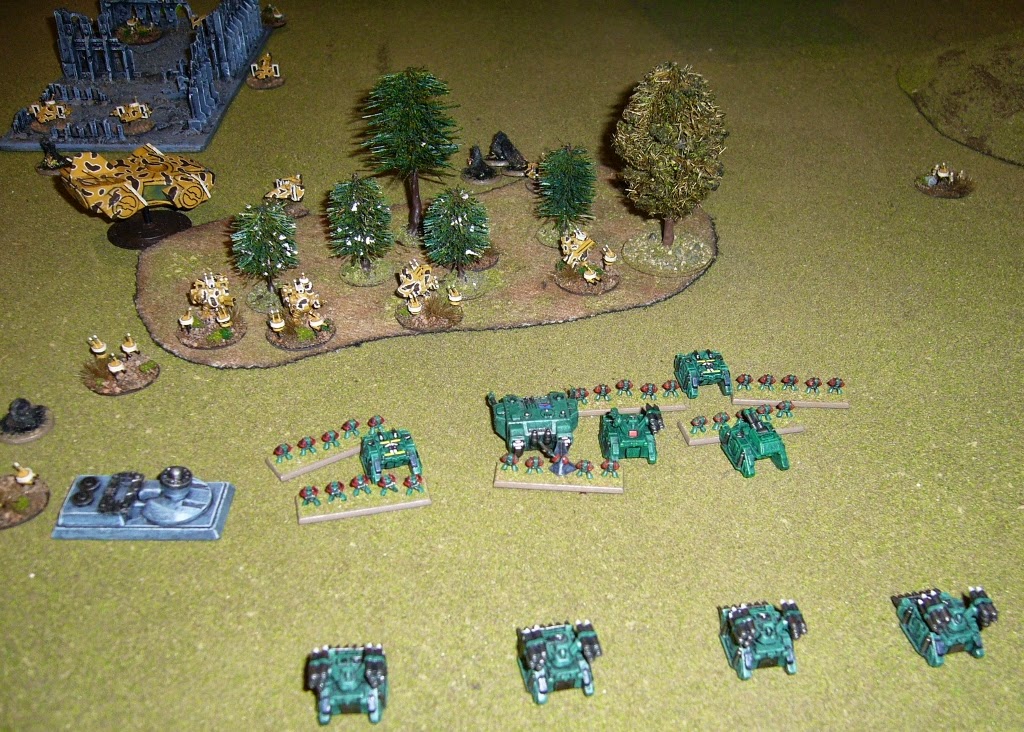 Casualties are heavy on both sides. The Tau Spacecraft does two points of damage to one Warhound and 1 point of damage to another. 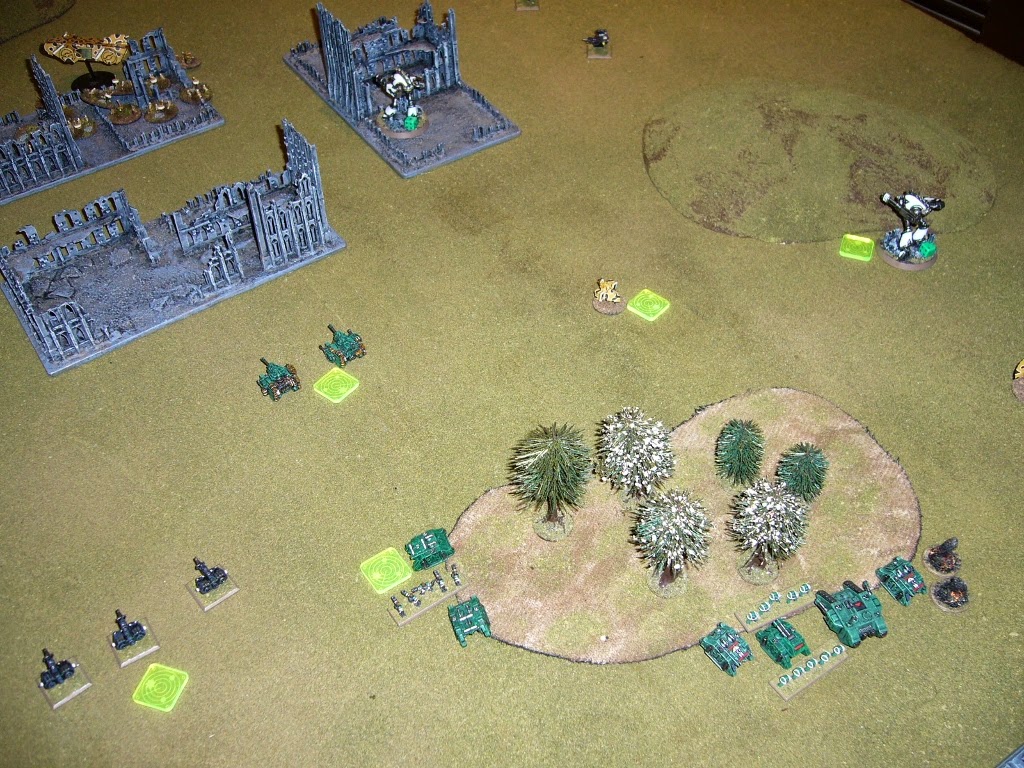 End of turn before rallying and disengaging.

Tau Pathfinders and a beer bottle teleport in on my left... 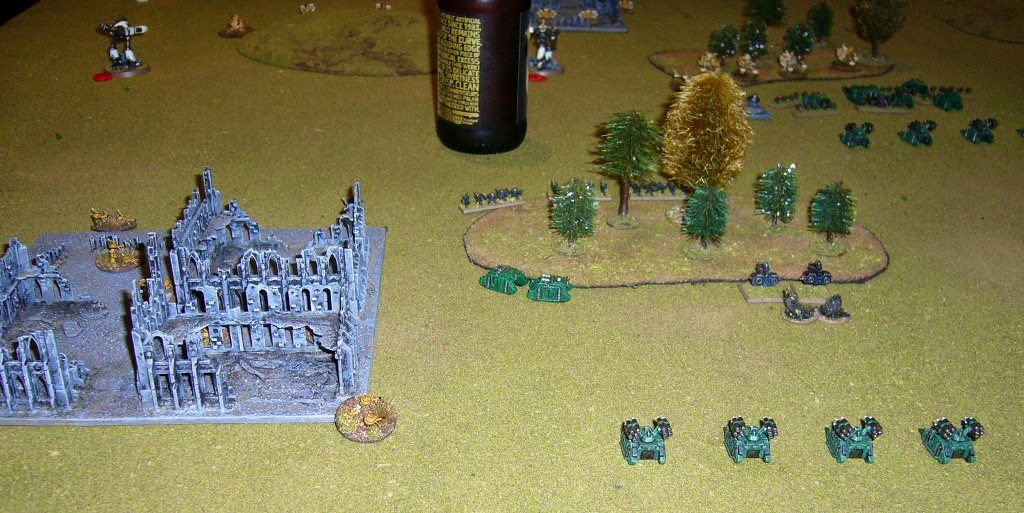 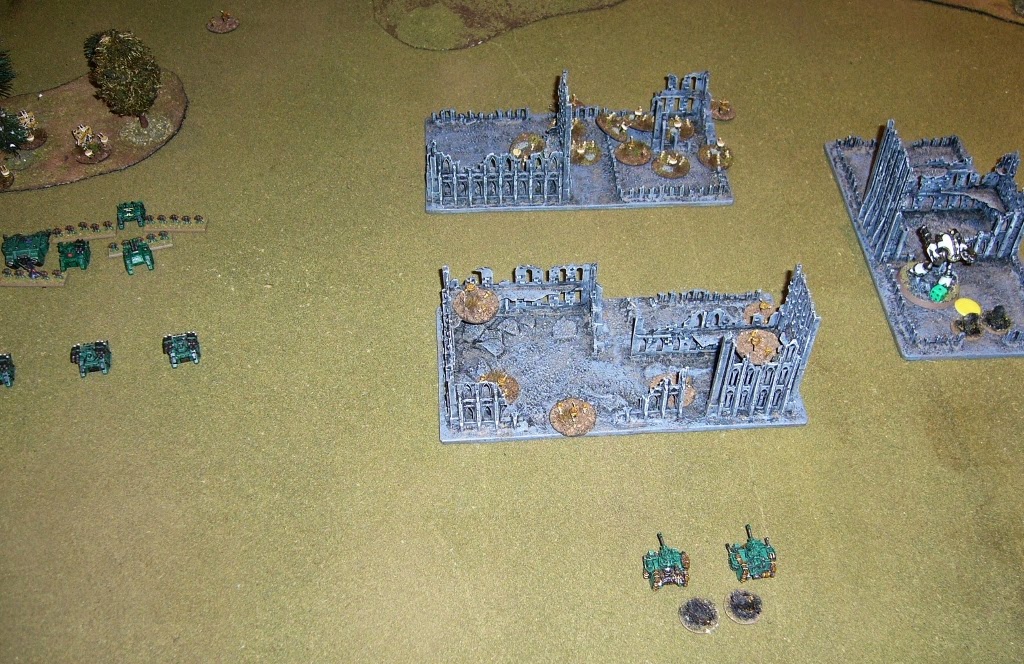 and on my right. 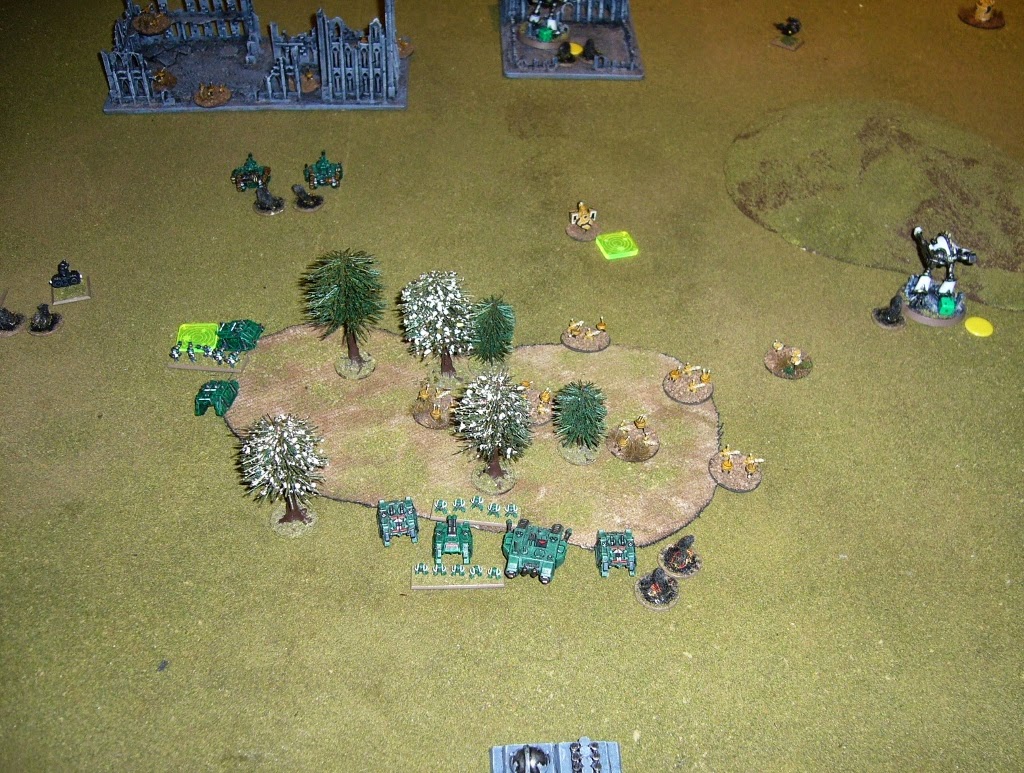 I win Strategy Roll, and a Warhound runs forward and crossfires a Firewarrior unit in the centre. 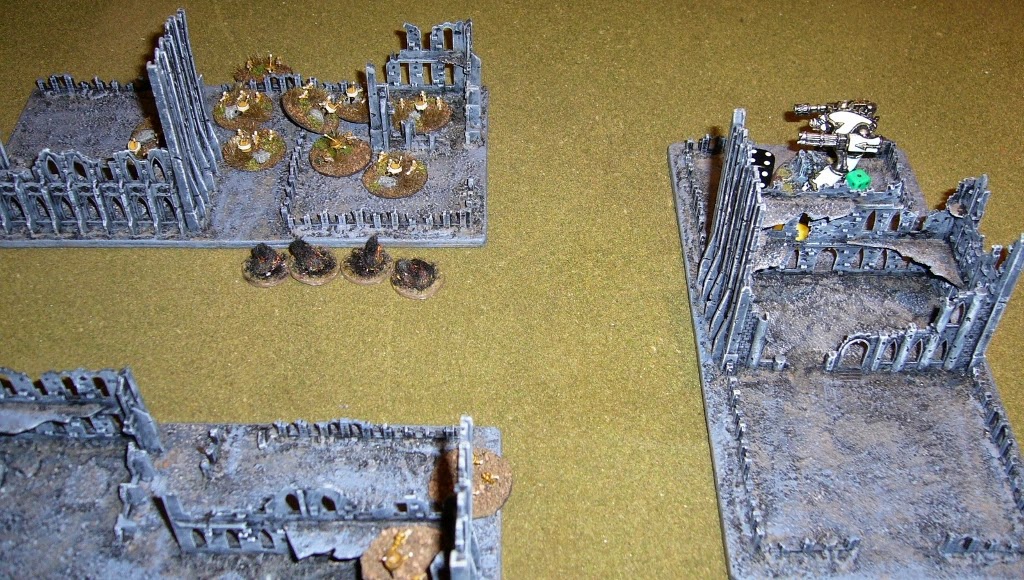 Pathfinders engage my Supreme Commanders formation, but lose and fall back. Perhaps the only action by the Tau this game I judged ill advised. 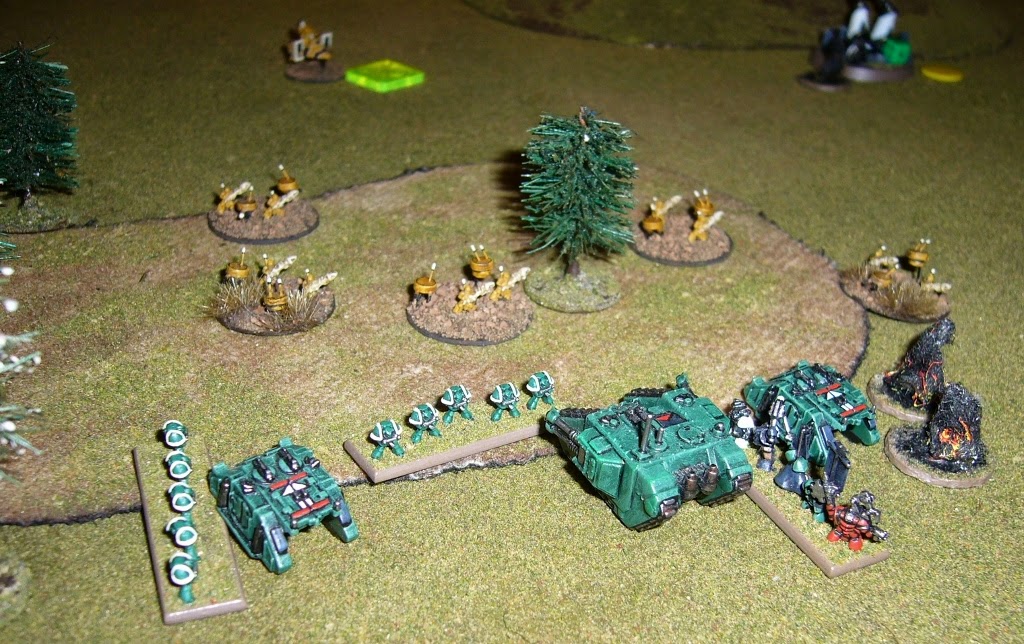 Tau crossfire my Tactical formation in the centre, after my Whirlwinds have knocked back the Crisis suits in a crossfire barrage. 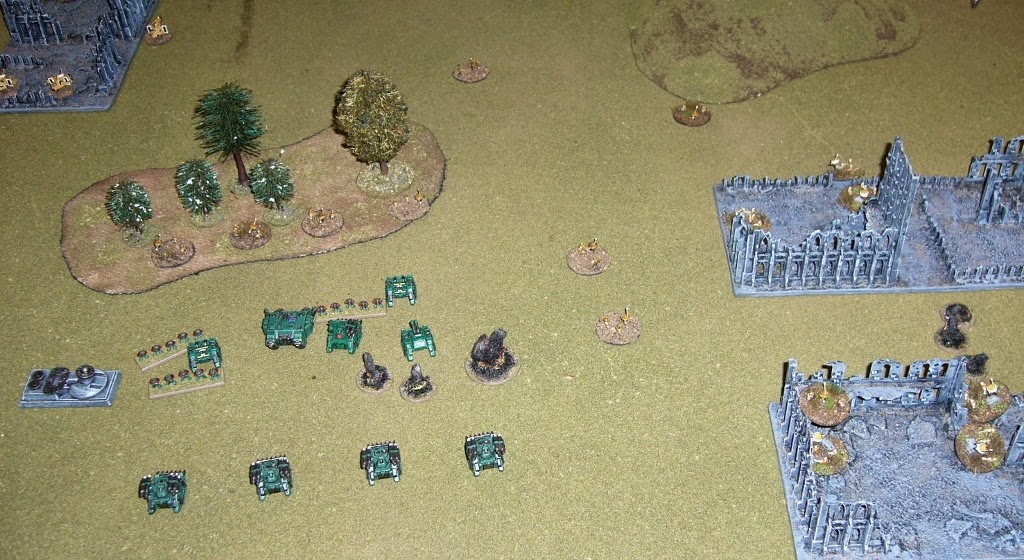 My Tacticals regroup and fall back. 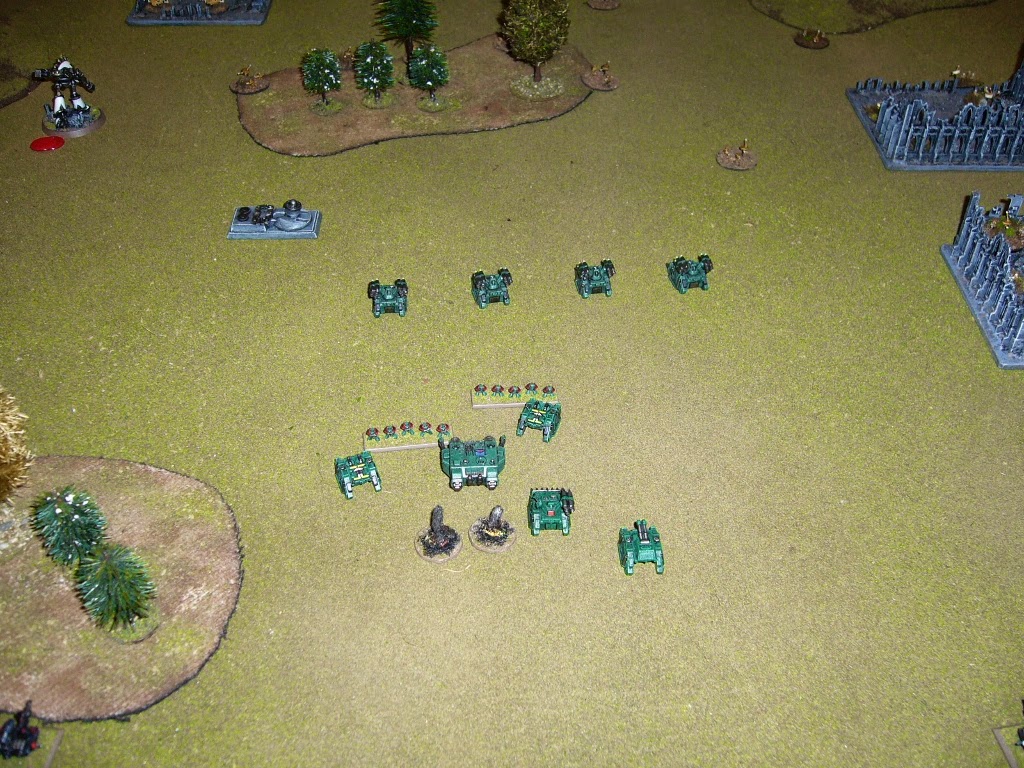 My two Warhounds on the left flank crossfire and eliminate the Crisis suits (yellow counters = shields down, red counters = plasma gun recharging, need to get some better markers!). 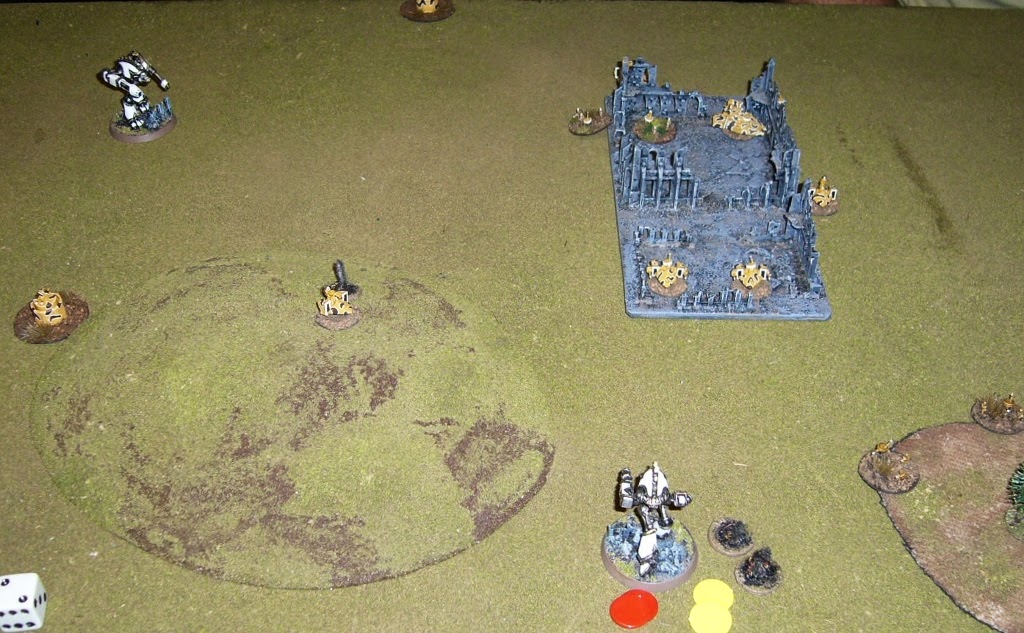 Lanspeeders flank the Tau position... but are countered by another Tau air drop. 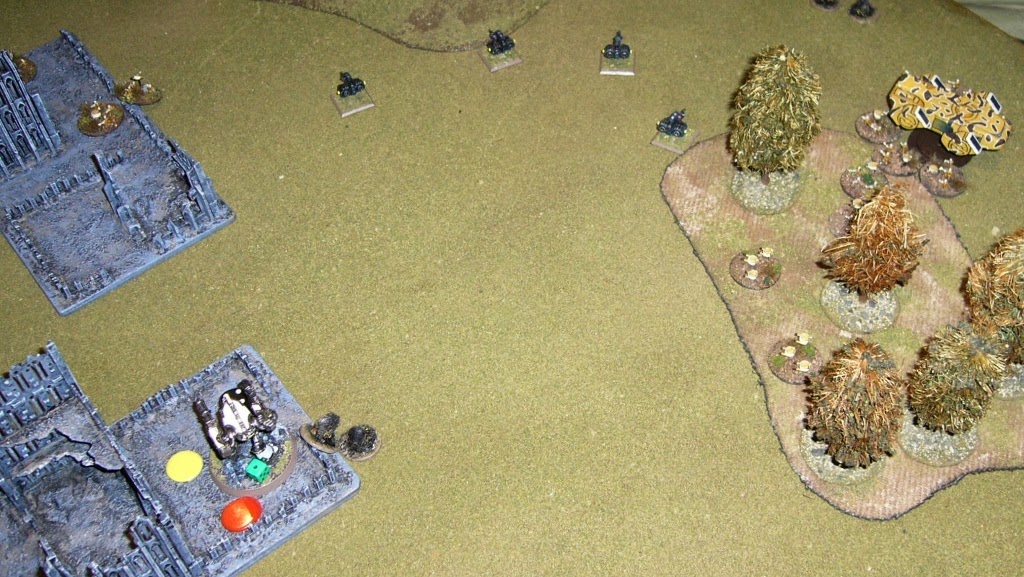 My Thunderbolts intercept, damaging the Orca. Tau fighters come in and destroy a Thunderbolt. 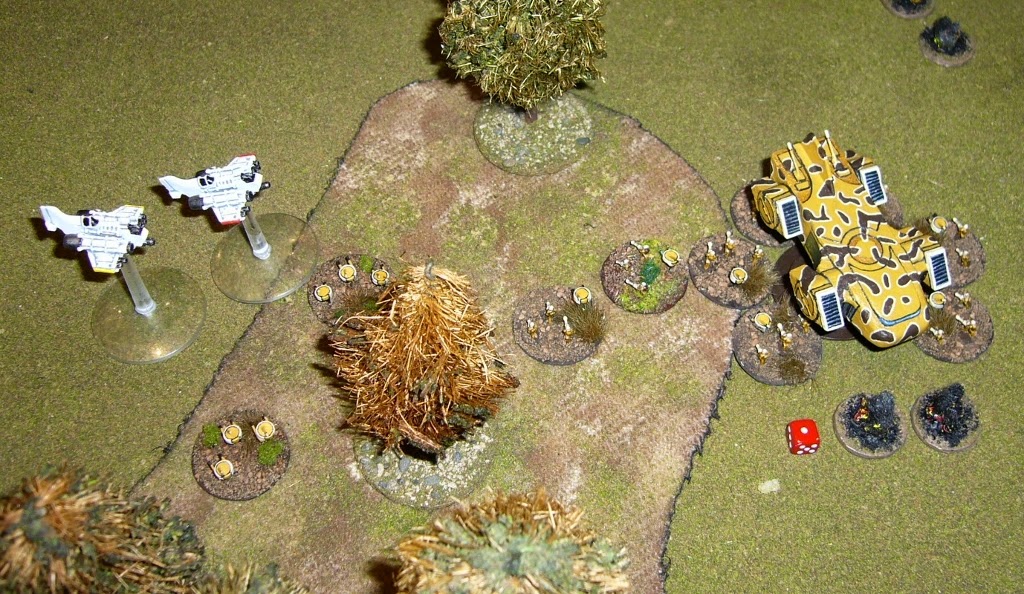 End of turn and there are units all over the place. Once again I seem to have managed to get a lot of my units fighting in the open against Tau in cover -how does this keep happening? :) Partly because I am pretty vehicle heavy in this game I suppose.

Situation on the right. 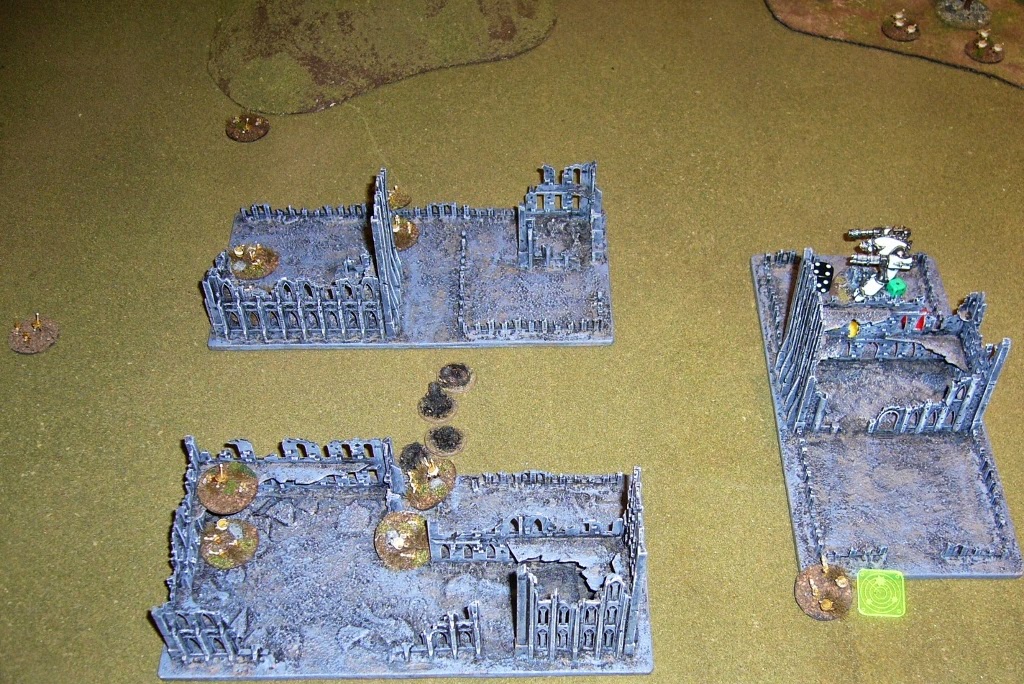 Situation in the centre. 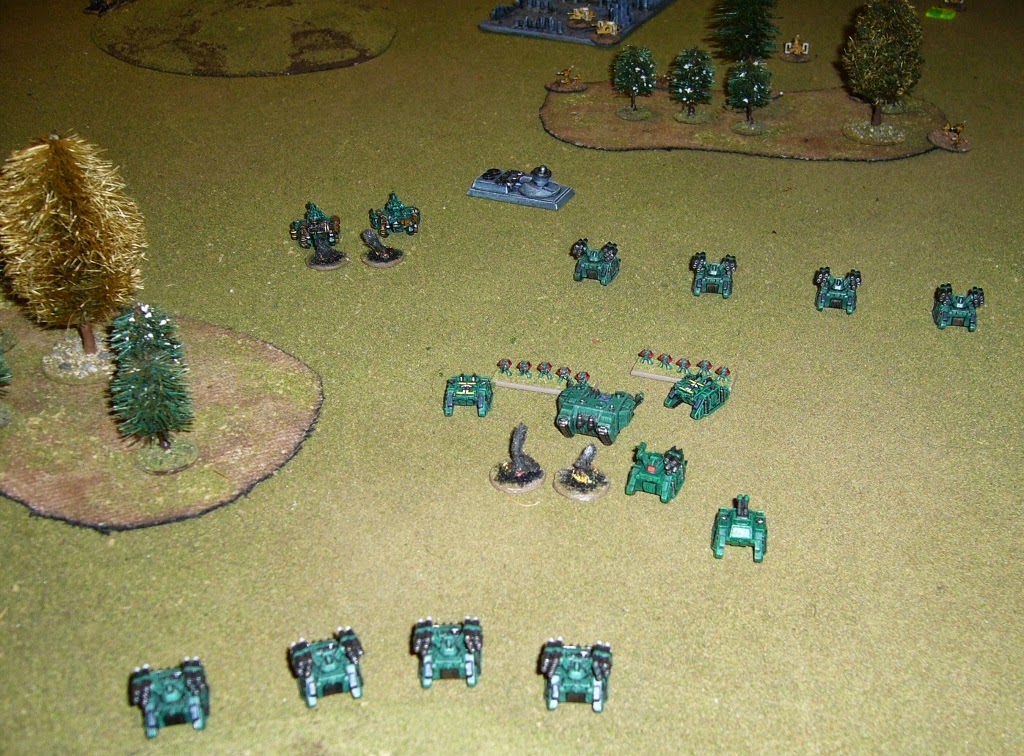 I win Strategy Roll again, and Warhounds rake the Tau infantry in the ruins on the right flank. 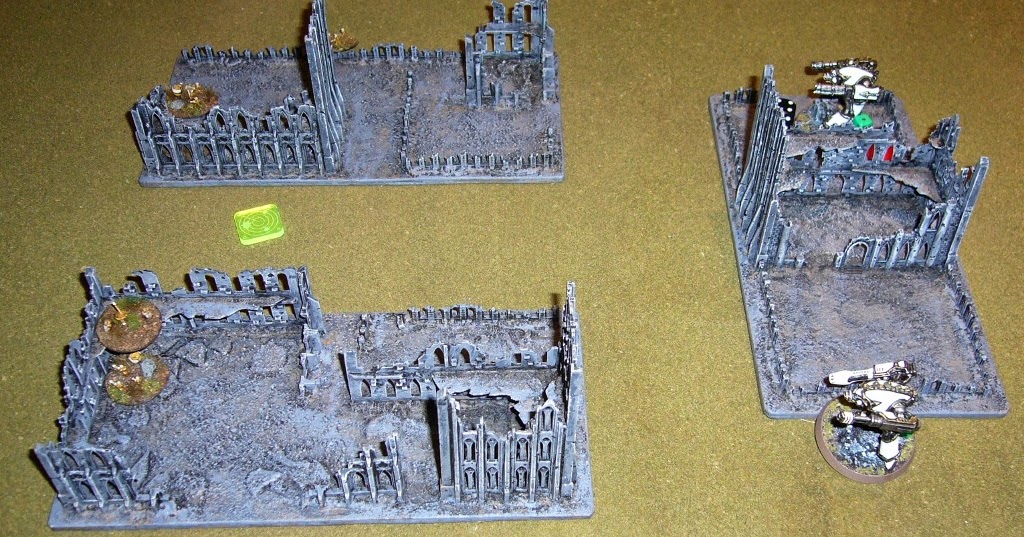 Pathfinders engage and rout my Tacticals (which have now lost their infantry). 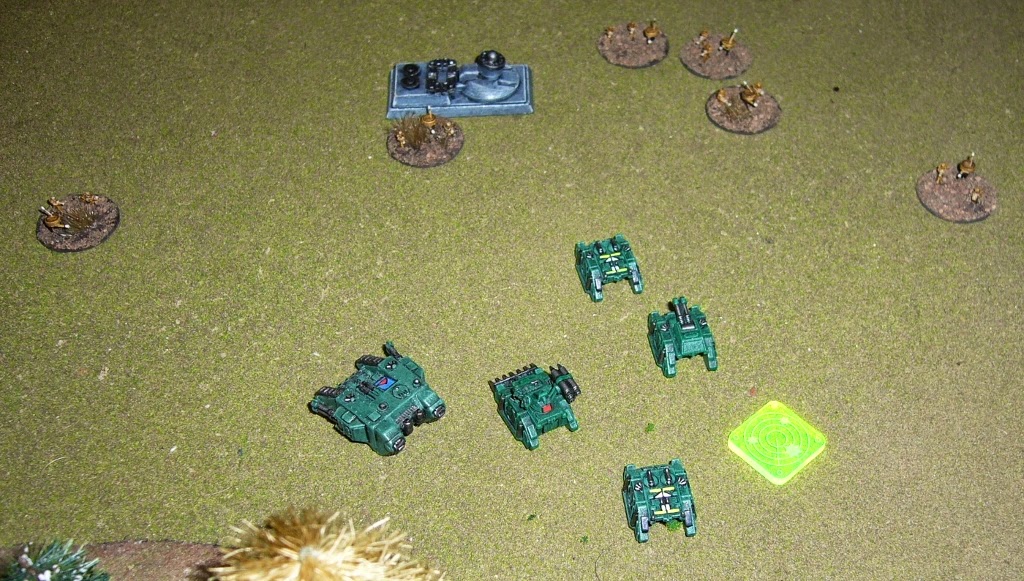 Seem to be missing some photos, but basically there are Tau Orcas flying all over the place with decimated units desperately trying to take objectives on the ground. Neither side manages to do achieve this however. My Break the Spirit formation is down to a single Razorback(!). Tau Break their Spirit Formation has two infantry and a transport left and is trapped between Warhounds, but is Fearless.  One of my left flank Warhounds is destroyed when  an Orca fly past gets two criticals!

I win Strategy Roll yet again. Both our Break the Spirit Formations are wiped out so we both gain "Break Their Spirit" Victory Conditions. A Tau Orca then rams my left most Warhound to knock it off the Tau Blitz! Warhound takes no damage but morale breaks and it is out of action. 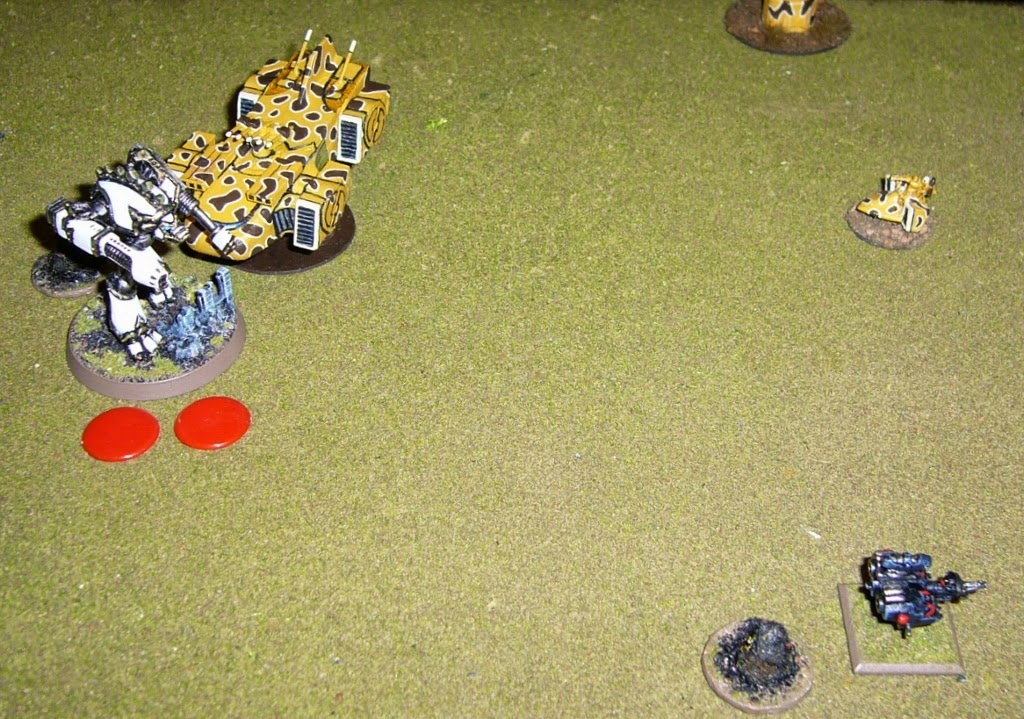 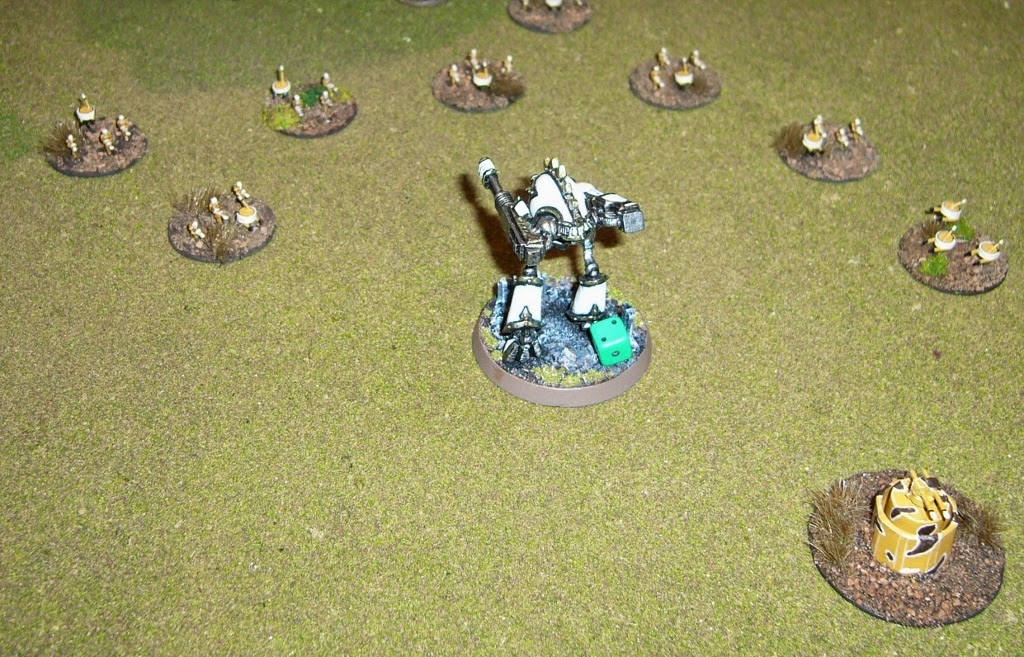 Orcas all over they place! but too late. Tau have too few units on the ground to contest, but only just!

A very hard fought and closely contested game, right down to the last few activations. Both armies were largely of of the "popcorn" variety which tend to be quite competitive, i.e. many small cheap activations rather than fewer large formations. The Tau really lacked in anti-tank firepower, which made dealing with all the marine armour challenging, and it's a credit to Andrew that he remained in it right until the end. But at last the Tau menace is contained - at least for a short while!
at 13:25