I attended Warclouds 2021 over the past two days - an annual wargaming convention here in New Zealand nicely run by the Christchurch Wargaming Section of the Woolston Club once again.

Note: Before any overseas readers freak out about all the people in close proximity, I should state we have effectively eliminated community Covid transmission here in New Zealand through border controls, hence life continues largely as normal thank goodness. 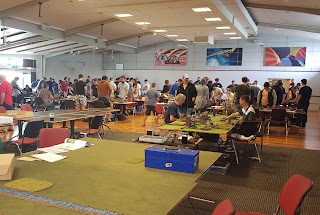 The luxury of attending gatherings like this is something we have tended to take for granted, so given the uncertainty of 2020, appreciation for this opportunity was some extra motivation to attend this year.  And hopefully vaccines knock the stuffing out of the pandemic and people everywhere can get back to gaming!

Another motivation for attending the convention was a comment I made in the local Christchurch Historical Wargaming Group facebook page recently:

"A problem with the historical scene I think is that many players tend to be a bit older with more resources, and so set up their own gaming space (i.e. at home) and have a crew they hang out with. Unfortunately it is also something of a self-fulfilling prophecy, in that the more historical gamers do this, the less reason other such gamers have to go to the club. And the less younger players in other systems are exposed to historical gaming. This despite the fact that the club has fantastic resources we could only dream of last century! Many boxes of great terrain and terrrain mats, and a bar and food on site!"

So as expected, most of the players were playing fantasy/sci-fi, though  some of us were playing Ancients, including myself Mike, Brett, Gordon and two Brian's (neither the messiah) in 28mm. Tournaments at Warclouds were:
Plus a few other games were played, including from memory, Adeptus Titanicus, Battlefleet Gothic, Star Wars Legion, 9th Age, Malifeux, and Saga.

Here's a brief tournament report of my participation in the 28mm Ancients.  We could use a different army each round, which I chose to do, taking Seleucid, Pyrrhic, Triumvirate Roman, and Graeco-Bactrian armies in succession.

As my opponent Bryan commented, that's not much terrain, and his Roman line looked rather small even including his planned ambush on his left. Bottom centre, my Scythed chariots ready to plunge into the legionaires in front of them. 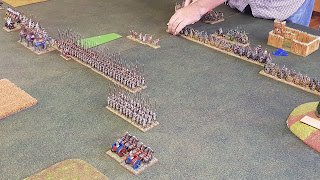 Heavily armoured Roman cataphracts fight hard, destroying a Pike block in a round, but I have reserves coming. 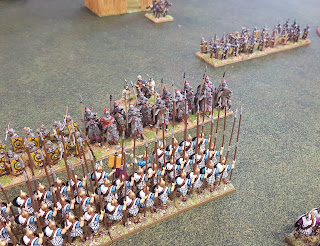 A look down the line, my Scythed Chariots wreck themselves as they do, but manage to inflict 3 and 2 damage  to legionnaires in front of them in the foreground (note - heavy infantry takes 4 hits to kill in ADLG, cavalry and mediums 3 hits, light troops 2 hits). As can be seen the Romans are in trouble down their line. 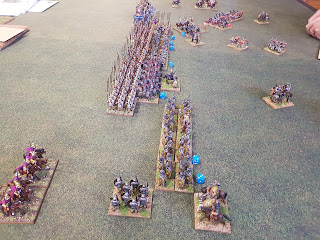 And boom, the Romans break (casualty pile in upper right).

Next up vs Brett's Franks.  Notice the awkward deployment of my right pike block. Seeing nothing in front of them during deployment I realise there is an ambush on my left, so they set up to rush over to reinforce my left flank!

Not easy to do with Pike... 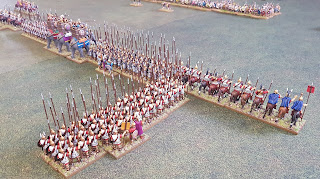 Here's the Franks, keep an eye on that big guy in the centre.

Both sides take heavy casualties. My heavy cavalry on the right chases off the Frankish medium cavary, but pursues out of command range and I can't get them back because their general is busy trying to move his pike to the left (too damn slowly I might add!).  My elephants get disrupted and wounded in the centre, and stampeding routed elephants cause damage to both armies. 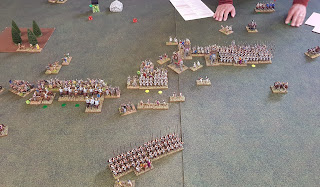 A brief moment of glory, my light horse kill a Frankish General with a flank charge on the left. 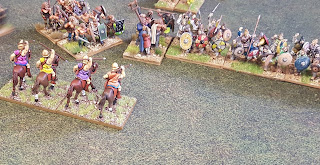 The big Frankish hero has got ahead of his line, and decides to charge a pike block by himself. 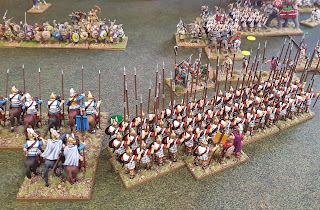 It could have been glorious on another day, but this time a few dozen pike thrusts put a quick end to the recklessness! 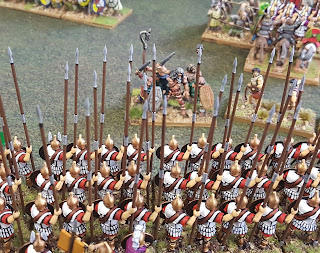 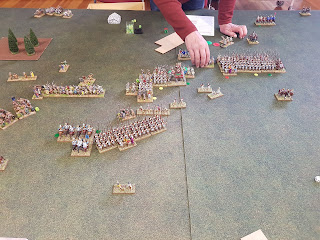 In the centre my own Guard Pike with their bald general have been surrounded but are fighting on heroically,  before some Lancers ride to their rescue.

But in the end, casualties for the wrong-footed Pyrrhic forces are too heavy, Pyrrhus himself falls, and the larger Frankish army is victorious. 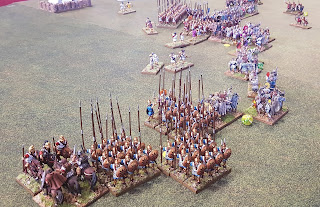 Next up a Roman civil war (something Romans spent far too much time doing historically). Both of us have the Barbarian auxiliaries, Galatians for me, and Franks for my opponent Mike.

On my left, my Javelinmen and Galatians. Opposite them cavalry and Legionnaires. 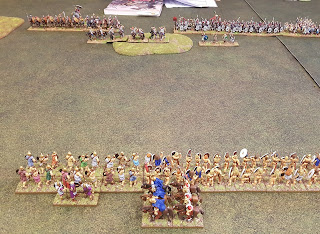 On my right, my elite Legions. Opposite them the Franks and Auxilia. 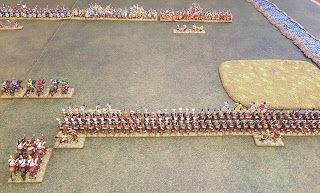 A view from the enemy lines, Republican Legionnaires ready to march forward.

I advance to attack, except for the Javelinmen which retreat from the enemy cavalry, swinging around to plug the hole in my centre. 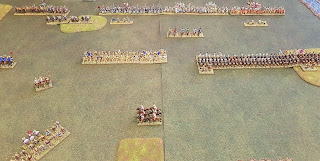 A couple of short sharp sticks is no match for heavy cavalry, time to leave! 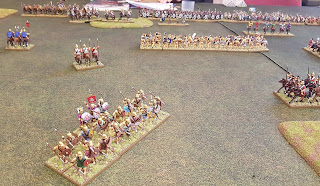 My Galatians facing the enemy legions. 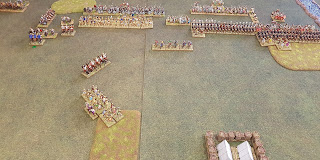 View from the enemy lines.

My legions grind forward through the Auxulia, which have caught my legions in the rough, slowing them down.

My Galatians charge forward, but their flanks are exposed. 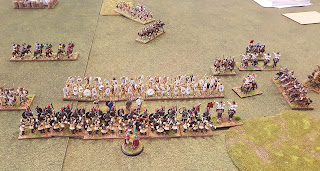 Franks chase through the gap towards my camp.

But are halted (though only just!) by javelinmen and light horse. 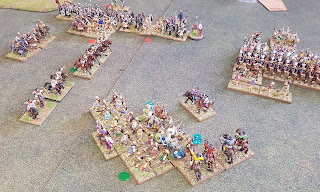 My Galatians are cut down to a man, but my Legions crush all before them and the Republic is victorious. 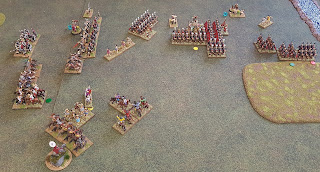 Last game, and I'm using cavalry heavy Graceo-Bactrians versus Gordon's Early German hordes. I have wings of heavy cavalry (and also elephants on my right), but only a pike block guarding my baggage and the centre. The plan is a double envelopment, smash both wings before the Germans centre can come into action.

I rush forward on the right...

Too slow, heavy lancers smash into both their wings... 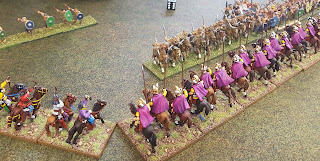 With both wings smashed and cavalry running amok, the Germans are lost. 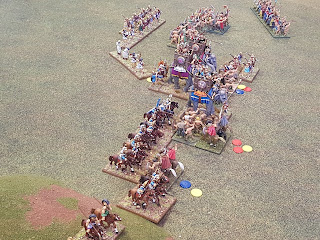 And that was the end of my games! Good to take the ancients out for a run, and thanks to Brian for organising. :)

I took photos of a few other games at the convention, though didn't have time for too many! Here's a few pics though. Much nicely painted 40k: 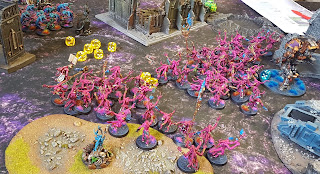 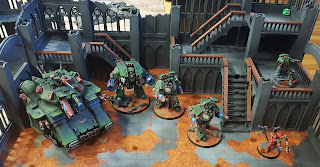 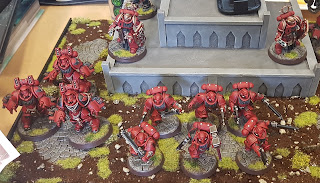 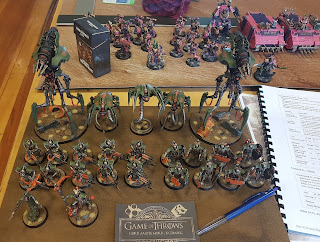 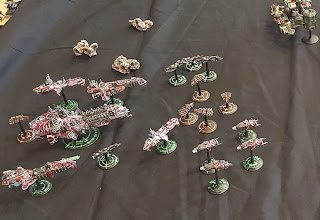 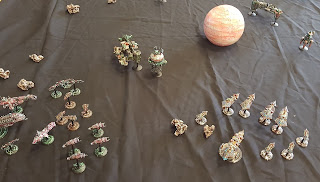 Saga being played in the main bar. 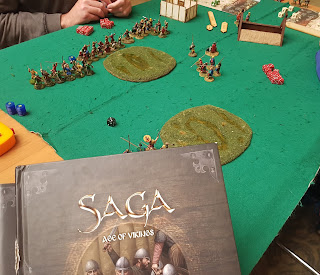 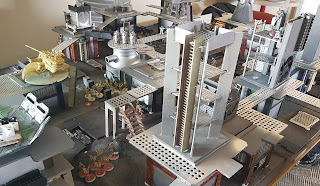 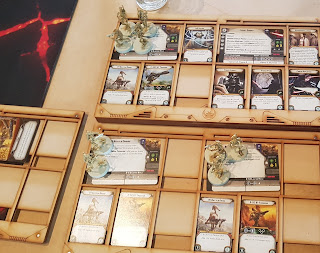 I did take some other photos, but they didn't turn out very well unfortunately so will leave it there.

Thanks for looking, and thanks to all the organisers of the convention and staff at the Woolston Club!
at 09:34