A game of BFG the other day, with my Orks taking on Mike's Imperials in a Cruiser Clash Scenario.

Here's a look at the two fleets. 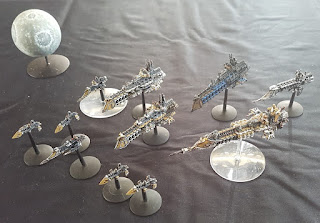 
Many dust clouds and two small planets were the celestial phenomena. Off to the right and not influencing the game were some asteroid fields.

Imperials move first. To the right are the Retribution, Lunars, and Escorts. On the left is the Dauntless, dauntlessly facing down 12 Ram ships... My Cruisers and Dethdeala Battleship face the main Imperial force. 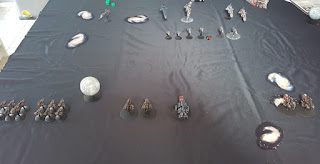 My Orks knock out a couple of Escorts, but then disaster occurs as a lucky torpedo strike from the lone Lunar hits Deathdeala, causing a hull breach and also smashing the bridge. A Killkrooza on the right has its port weapons batteries knocked out by another critical hit.

Three Ram ships manage to hit the Dauntless abeam, one being destroyed in the process. But the damage is superficial with the Dauntless bracing and taking no damage!

On the right the Killkroozers manage to cripple a Lunar with torpedo salvo and battery fire, and they also destroy the last Firestorm. 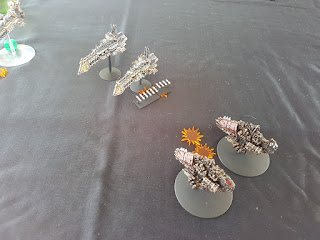 Deathdeala destroys a Cobra with Fighta Bombas. It's firepower is reduced due to being braced from the last turn, and it causes no other damage this turn. 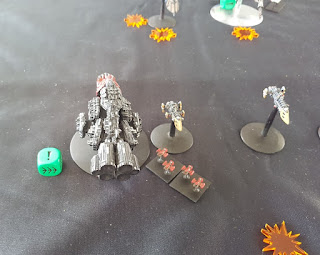 A Fighta Bomba attack from the Terror Ships causes a single point of damage to the lone Lunar Cruiser. 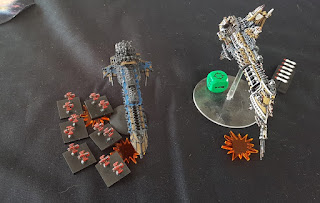 A decisive turn for the Imperials arrrives. The 3 Lunars and Retribution Battleship go on lock on orders. Passing between the Deathdeala and Killkroozers, they are able to open up with both broadsides. Remaining Cobra Escorts move to fire from the rear of Deathdeala. Deathdeala and a Killkroozer are both crippled and down to 3 and 1 hit point respectively. Deathdeala also loses its Starboard weapons batteries in a critical hit.

The Dauntless tries to get away from the Ram ships. 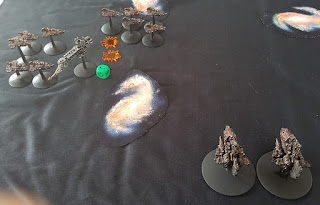 Orks turn, and the Ork ships close with the enemy. 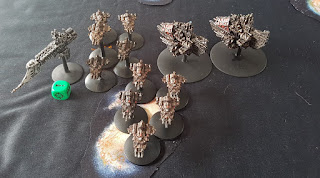 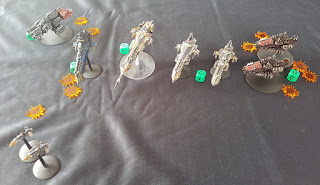 But being crippled Deathdeala and the damaged Killkroozer disengage. Amazingly Deathdeala had still managed to pass all its leadership rolls despite the smashed bridge and being on Leadership 4 since the second turn torpedo strike which wrecked the bridge. One thing which went right! The remaining Killkrooza fails to do any further damage despite managing to reload its torpedoes.

And even with all the Ram Ships and Terror Ships concentrating their firepower and ordnance on the Dauntless it only takes a single point of damage! 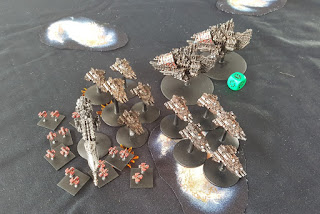 With two capital ships gone, little damage on the Imperials, and in a poor position for the next turn, I concede. Well done Mike!
at 08:26