Another game with my Speed Freaks, this time vs Tim's Eldar, with him using the following Iyanden list: 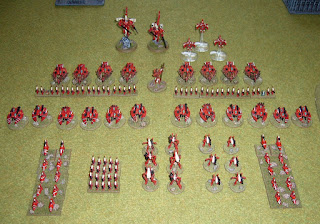 I used my Speed Freaks again, same list as the last game, but adding an extra Warbike as Tim was 25 points over 4K points. 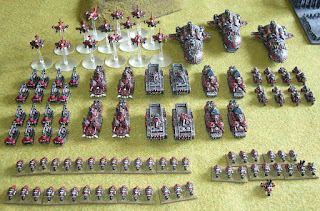 Same game terrain as last time. Eldar are back and mostly behind cover, with no garrisons. They win the Strategy Roll. 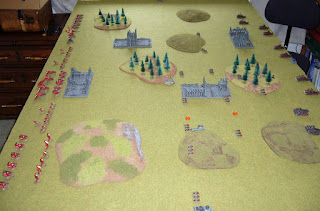 Wraithlords assault out of the gate in the centre of the table and destroy a Warbike formation, though I manage to destroy one Wraithlord in return...

They then consolidate into cover in the woods. 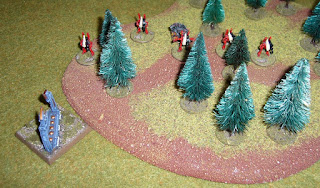 Two Gunfortresses double forward and fire at the Wraithlords only placing a blastmarker. The Eldar Revenants then double and fire, destroying both of them... before retreating to woods on the right.

More Gunfortresses double and manage to kill a Wraithlord, breaking the formation. It remains in the woods. 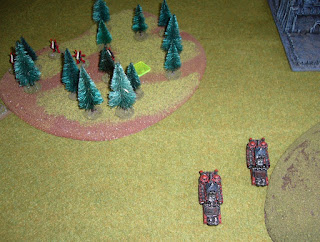 Wraithguard in Wave Serpents double up and damage a Gunfortress. 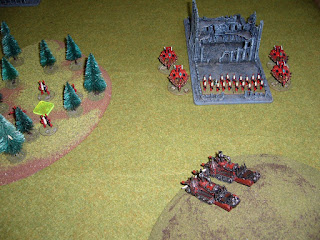 A Landa tries to come in and land, but it is shot down by Nightwings. Ouch. 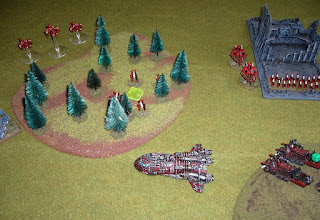 The other two Landas attack and destroy the Revenant Titans, one Landa and 2 Skorchas are also destroyed. 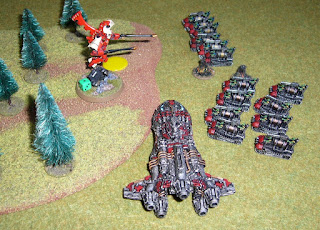 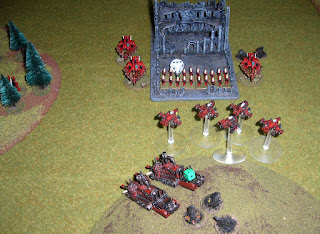 Gunfortresses converge on the centre. 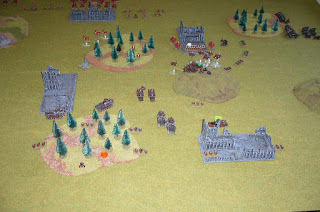 Another Fighta Bomba attack goes poorly and 2 Fighta Bombas are lost without killing any grav tanks (bottom left in below photo). 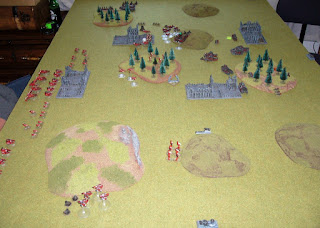 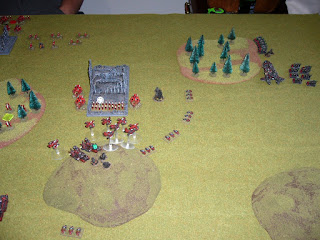 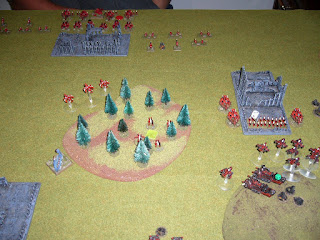 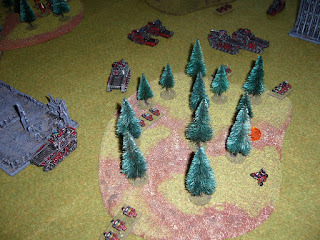 Avatar is summoned in the centre. Orks win Strategy Roll. 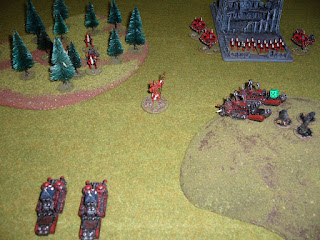 Gunfortresses engage and destroy the Avatar! This places blast markers on 3 Eldar formations that witness the fall of their Living God! 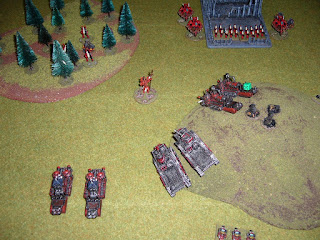 Skorchas advance and flame the Wraithguard with crossfire, getting lucky and killing three of them and breaking the formation. 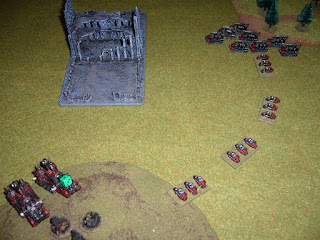 But now the Eldar do a triple retain of death... Wraithlords advance and destroy two Gunfortresses in an engage, another two are broken by fire by the other Wraithlords, and then Wraithguard assault out of the gate and wreck another two. Disastrous! 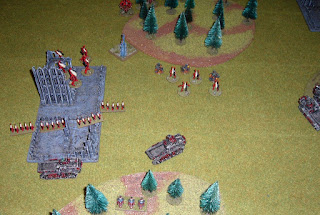 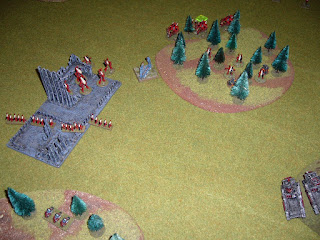 I double my Skorchas behind the bikes in the Eldar centre, forgetting that a Wraithguard formation to the left is on overwatch.  It opens fire and 3 Skorchas are lost and the formation breaks and runs away.

I get some vengeance against the Eldar Nightwings at last, as they tangle with my Fighta Bombas. 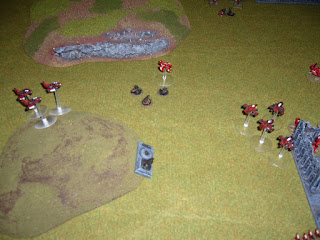 My Warboss mob then assaults the Wraithguard. Difficult terrain rolls go very badly though, and I lose two Warbikes and the Warboss as they crash charging through the woods and ruins! I then lose the assault and the formation is wiped out. 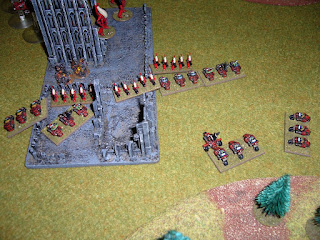 I have barely any unbroken ground formations remaining at this stage. 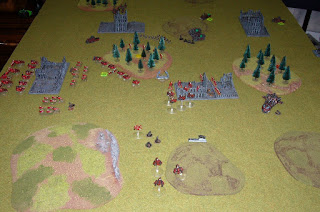 Whereas the Eldar still have plenty of intact formations. 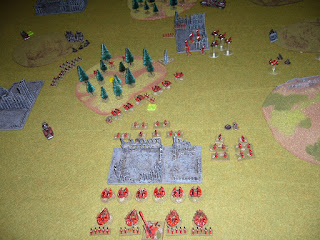 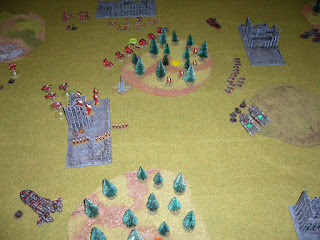 I win Strategy Roll and my Skorchas supported by a Gunfortress engage the intermingled Eldar Bikes, Falcons and remains of a mounted Wraithguard formation. Bit of a desperate attack but that is what things have come to. I win and break all three enemy formations. 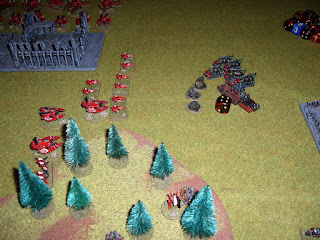 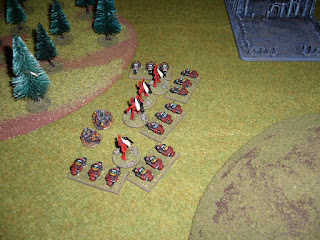 I manage to break the Wraithguard near my Blitz objective with Fighta Bombas. 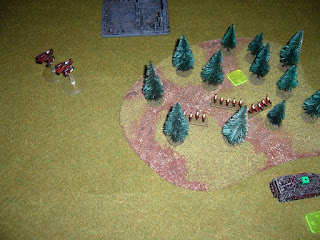 But too late, as the only unbroken ground formation I now have left is a single damaged Gunfortress! 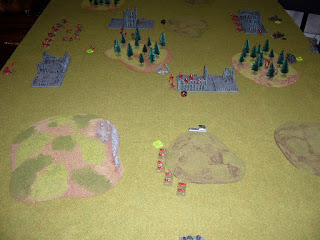 I fail to rally any other formations, and with many Eldar formations ready to activate next turn, and only a single and 'surely about-to-die' Gunfortress to defend with, I concede. Eldar would achieve most if not all Victory Conditions in Turn 4. Well done to the Eldar! 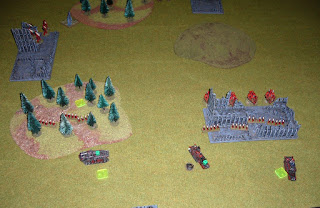 Solid play by the Eldar and a few mistakes by myself meant this game was only going to go one way. Tangling with reinforced armour Wraithlords and Wraithguards in force was never going to be pretty. I should have avoided them as I did with the armour in the previous game, as this would have at least given me a better chance. Given the Wraith construct dependence on the gate in the centre of the table this should have been more doable than I achieved too! And once again Gunfortresses exploded like fireworks!
at 16:15