Another game of Epic vs Nick's marines today. Nick hasn't played much Epic Armageddon but has done a nice paintjob on his marines so time to get them on the field of battle. He borrowed a couple of Warhounds from me and I helped him out with a few tips on using Marines throughout the game - as they are not the easiest army for a beginner to get the hang of!

My Ork army list once again made using Army Forge:

Nick's Marine army list was as follows. Except that we forgot that the Warhounds were supposed to be singles and they were instead run as a pair, and we also forgot that the Assault Marines had a Chaplain (despite Nick having modelled one!).

The photo below shows the lineup of the armies.  The Marines have garrisoned their Tacticals with Dreadnoughts formation in the central ruins, and I have done the same with my two Ork Warbands. In hindsight I wish I had also garrisoned the Stompas in there... 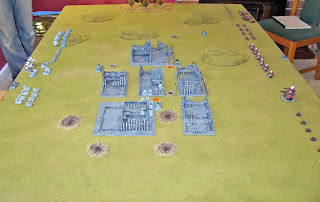 Nick wins strategy roll, but hands it to me. I storm forward with the Gargant and blast the Marine garrison, but only place only a blastmarker. Their overwatch also places a blastmarker on my Gargant.

On my right I advance my Dethkopters behind a central hill. Nick doubles up with his Landraiders, killing two, and then engaging in a firefight with his Bikes with support from the Landraiders. The Dethkopters are wiped out for the loss of two Marine Bikes. 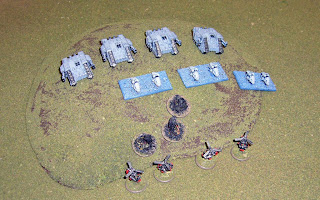 Both sides move to contest the ruins in the centre of the table. I'm trying to soften up the marines with some shooting so my warbands can assault them, but it's not working very well. The Warhounds and Predators scoot forward and blast the Gargant removing all its powerfields and doing a point of damage. My buggies race down the left flank into a position to threaten the Whirlwinds in the next turn. 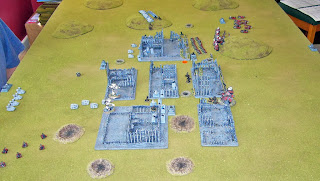 On the other side of the table, my Gunwagons double forward and shoot the Landraiders, the Zzap guns miss, Nick saves the one other hit, and thus the Landraiders only take a blastmarker. 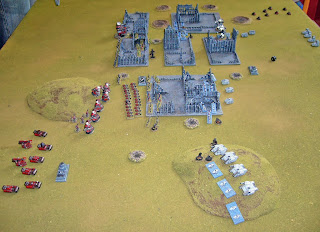 Nick teleports the Terminators in, wins the Strategy Roll, and assaults the Gunwagons. The Gunwagons are wiped out for the loss of one Terminator. The Predators then sustain fire at the Gargant, doing a point of damage. 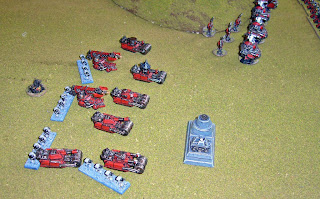 The Stompas retaliate with a sustain fire action, and kill three Landraiders. I also sustain fire with the Gargant on the Warhounds, but fail to do any damage. Not a great move on my part really as I was out of range with its head Death Ray. 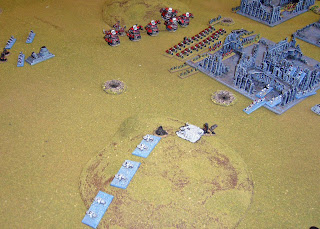 The Marine Whirlwinds fire and kill 4 of the nearby Ork Buggies, breaking the formation. The Marine Supreme Commander's Tactical formation and Assault formation then do a combined assault, firefighting and driving the first Ork Warband from the ruins with heavy losses and losing none in return. My Warbikes are unimpressed... 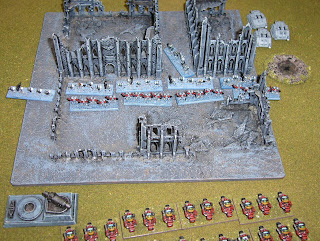 ...and race up the hill and wipe out the Marine Bikes, losing two of their number in the close assault. 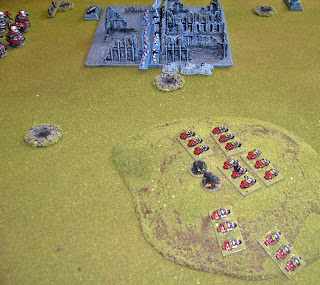 The Marine Warhounds blast the Gargant, which has now taken 3 points of damage and plenty of blastmarkers. It breaks and retreats back towards the Ork Blitz objective. My Stormboyz feeling the contest in the ruins is going badly, race through a gap in the marine lines towards the Marine Blitz and Whirlwinds, hoping for a lucky Strategy Roll next turn. The Gargant rallies, as do the Buggies and the lone Landraider. 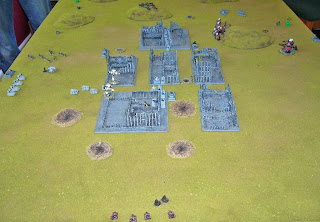 And... no lucky Strategy Roll for the Orks. 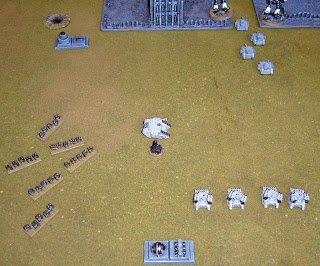 The Whirlwinds see off the Stormboyz just as they did with the buggies. 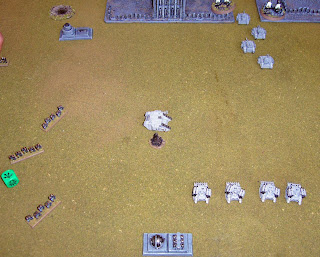 I try to sustain fire on the Terminators with the Stompas, failing the activation roll but killing one anyway with normal fire. The Terminators assault the Stompaz, killing 3 Killa Kans but being wiped out in the process before support fire from the nearby Tacticals can occur. 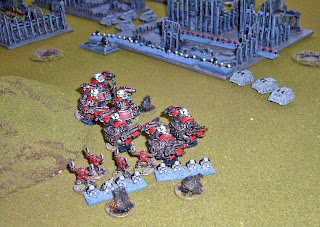 Undaunted the Assault Marines then launch themselves into the fray!. They are also wiped out in a two round close assault (if only they had their Chaplain - sorry Nick!) but they kill two Stompas. Chaplain or no Chaplain, the Stompas have had enough of all these ankle stabbers and waddle broken back towards the Ork Blitz to recuperate. 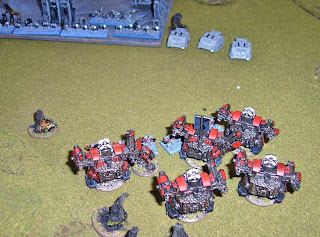 My buggies scoot and shoot the Landraider and break it, and contest the Marine Blitz. The Marine Warhounds advance and blast the last Orks out of the ruins. 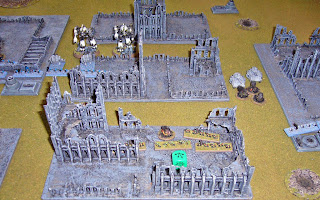 The Marines have the central ruins and send a Tactical formation back to shoot and break the buggies. The Ork Warbikes race towards the Whirlwinds, having learned nothing from the fate of the Buggies and Stormboyz and hoping to get lucky with the Strategy Roll ... 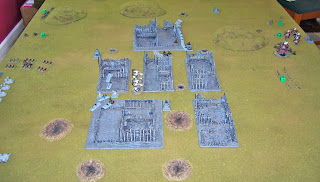 Orks win the Strategy Roll! The Warbikes kill two of the despicable Whirlwinds, sending the other two fleeing.

Marine Tacticals double back shooting the Warbikes, only placing a blastmarker but also contesting their Blitz objective.

More exchanges of fire occur and the Orks continue to fall back. The Gargant is on fire with 2 hitpoints left. The three strong remnant of a Warband doubles into the centre of the marine line to contest one of the Take and Hold objectives. 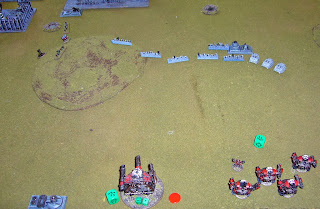 End of Turn 4 and neither side has achieved any victory conditions. I fail almost all my rally checks, and the Marines fail to rally their Whirlwinds. The game doesn't go another turn and so we count up victory points. The Marines have just over 2000 and the Orks just over 1000. 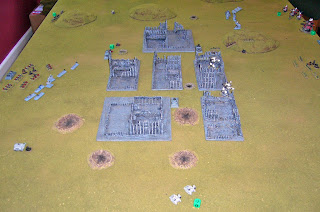 Well that didn't go very well! I should have garrisoned the Stompas in near the ruins at the start I think, and used my Gargant to support some assaults to hold the area.  Instead I got caught in a shooting match - not what Orks excel at! At least the Ork Warbikes did well sticking to close assaults! Anyway well done Nick!

Update: And Nick has also updated his blog with a report from the Marine perspective, including some lovely close up photography.
at 20:45