I played a 5K game vs Mikes Steel Legion yesterday. Unfortunately I forgot to switch the camera to a larger resolution so pictures are not the best, but I'll put them up anyway!

My Feral Ork list (made using the army creator at Armyforge) was:

Here's the setup, Mike is deployed along his baseline on the left. I am on the right, except that near the halfway line I have my Trappers garrisoned towards the bottom centre in a strung out line, and my two Squig Catapult Warbands are garrisoned in the forest top centre. 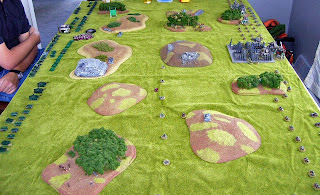 I advance on the left behind the cover of the forest, taking casualties from artillery... 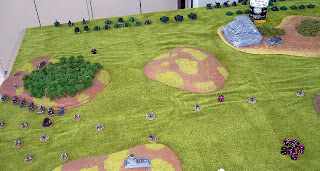 and then air attack. 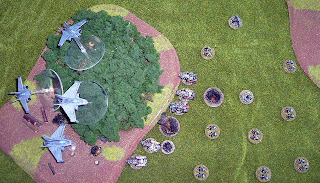 In the centre my Warlords Warband has debussed from their Orkeosaurus into some ruins. The reason for this is that Mike has his Deathstrike Missile Battery, that would do an average of about 7 damage ignoring armour to the Orkeosaurus, killing it and everyone riding it (including the Warlord). 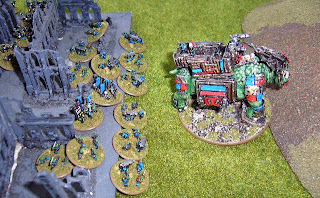 Mike shells the infantry in the ruins with another artillery battery, and my Warlord gets unlucky and dies anyway(!), along with some of his band. No more rerolls for the Orks all game and we've barely started! 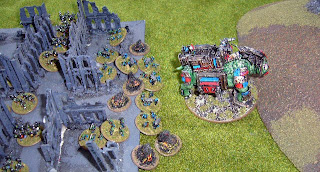 The Deathstrikes then target the steam Gargants, but I get lucky and they only do 3 damage to one of them. Then a Leman Russ company crests the centre ridge and blows another Steam Gargant to pieces, breaking the other two Gargants who retreat behind cover.

Bombards shell my first Squig Catapult Warband garrisoned in the woods and they take 7 casualties, breaking and heading back out of range. Bombards have shorter range than other imperial artillery, but the "ignore cover" ability makes a real mess of orks! 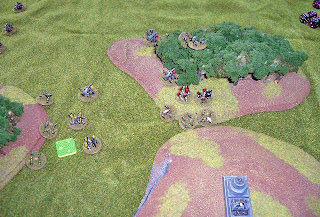 Here's a closer look at the Orks advancing on my right. One of the Orkeosaurus trips up moving through the woods, gets angry and stampedes over the routing Squig Catapult warband who are really wishing they'd stayed home today. Another two of them are lost. 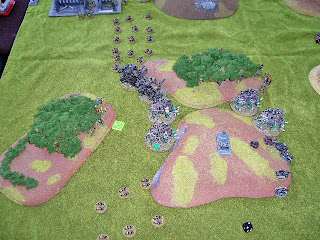 I continue my advance into the hail of fire, with the Squiggoths making it up the table to within strike range of a still loaded mechanised infantry company. Here's an overview towards the end of the first turn. 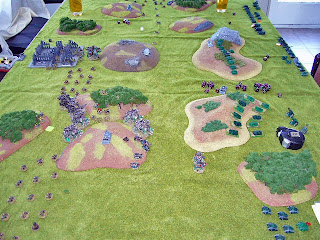 I win the strategy roll. My intact Squig Catapult Warband doubles to the top of the hill in the right centre, and fires on the Mech Infantry Company placing a blast marker and getting ready to provide fire support  as the Squiggoths charge into combat. 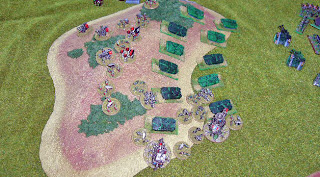 The Guard vehicles that can do so unload their passengers, including two Ogryns, and the battle ensues... 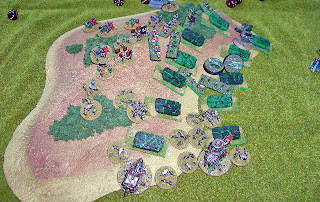 It's a catastrophic loss for the Guard, with the remants falling back as I continue to advance. The Leman Russ company on the left flank obliterates a Junka Trukk formation. 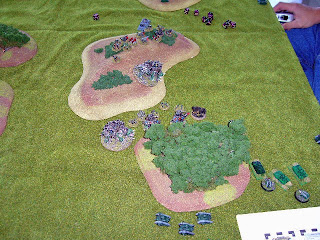 The Ork Madboyz rush across open ground towards the centre Leman Russ Company...

Mike can't resist the target opportunity, takes the bait and opens fire killing 10 of the 12. The remaining two Madboyz being mad and  fearless continue the advance up the hill. 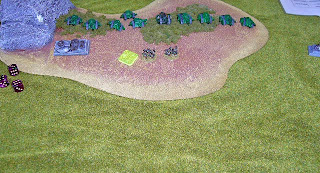 Here's the situation near the end of turn 2, with Orks advancing strongly in the centre and right. 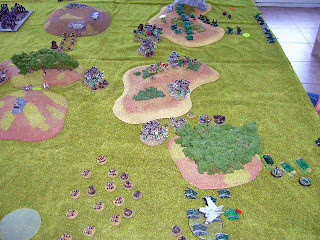 View from behind the Ork lines. 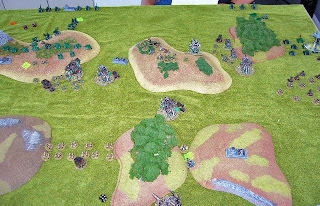 And from behind the Guard Lines. The two Deathstrikes having shot their missiles now have only a heavy bolter each and advance in front of the Leman Russ tanks to shoot the Ork infantry, missing. 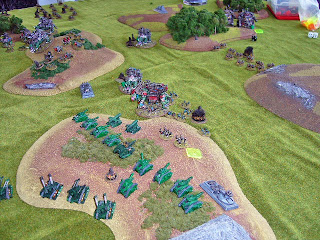 I win the strategy roll again, and one of the Orkeosauruses charges the Tank company on the hill, winning the combat and wrecking half of the tanks, along with a Hydra battery and the Deathstrike battery that had foolishly got involved. The Orkeosaurus is wounded and stampedes off squashing some more orks. 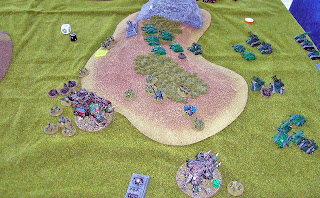 I then retain and assault with another Orkeosaurus against the other tank company, killing 4 of them and breaking them. My Orkeosaurus is wounded here too but stampedes away from the tanks avoiding stomping orks this time. 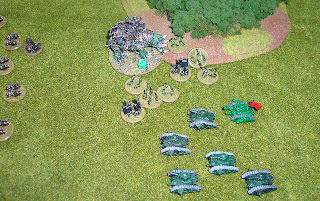 Mike's artillery fire continues to take a heavy toll, every battery that fires breaks an ork formation. There's more where they came from though and the orks continue sweeping into the Imperial left flank. The Boarboyz engage the Bombard battery here in a firefight and break them. 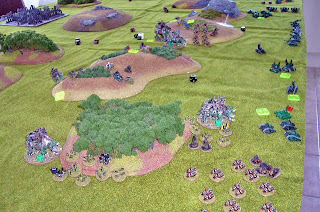 Mike reinforces his centre with his other infantry company in an effort to defend his Blitz objective and centre artillery. 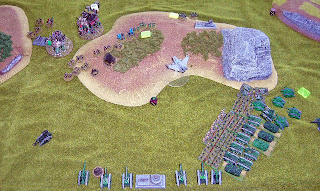 Some of my battered ork units have rallied, and rush to hold my own objectives. Here's the Madboyz grabbing my left flank objective.

And the unfortunate Squig Catapult Warband also rally, rushing back to hold my own blitz objective. Some  demoralised Junka Trukks are hiding here too.

On my right, an Orkeosaurus moves back to hold my right side objective. The Steam Gargants have rallied but remain lurking  warily behind cover remembering the bad things that have just happened to them. 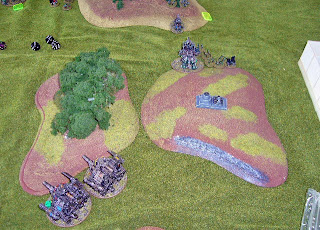 Mike manages to beat back the Ork attack in the centre, but has too few formations left to contest other objectives. I win 2-0 with Defend the Flag (hold my own three objectives), and Hold the Line (no enemy formations on my half of the table). 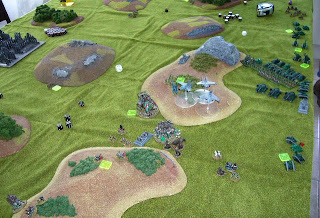 Well there we go, after a demoralising start the orks managed to pull through. I'm still debating whether to have Orkeosauruses in pairs or singles. Singles gives more flexibility, but they are a bit weak when it comes time for actual combat.


In terms of what the Guard should have done differently, firstly I think Mike should have taken his Shadowswords as singles spread out more, or at least kept them more central. They wasted turns on the right flank doing nothing when they could have been punching holes in Orkeosauruses.  Also having his infantry debussed would have made all the difference in that first combat and he probably would have won it. And he should have ignored the Madboyz bait! Lastly learning to use a few scout sentinels, and avoiding so much intermingling of formations (getting formations within 5cm of another friendly formation), would have slowed the orks down, giving his tanks and artillery more time to pour fire into them.
at 16:39