More progress on the Dwarves, assembled and sprayed, and here's a bit more on this process in this post.
See part 1 of this Dwarf army series here.

Of the box contents, there are still 20 of the crossbow/handgunners and the 5 Sharpshooters, but they are not in my first list. I will add them together with some extra figures (e.g. more shieldbreakers), in a second wave. 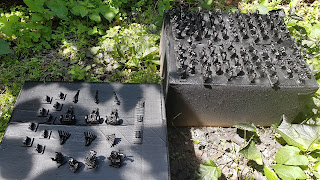 Some more assembly notes. I will be multibasing these, and I bevelled down the edges of the circular bases a little so they will blend into the basing material better. This takes about 5 seconds per model. I do want to keep the circular bases rather than cutting them off completely though, to assist with gluing them to the base. 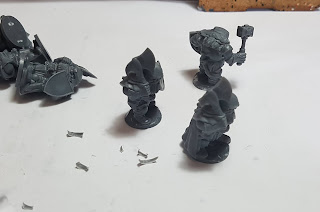 I base them on cardboard strips cut from beer packet, and glue with white PVA glue. 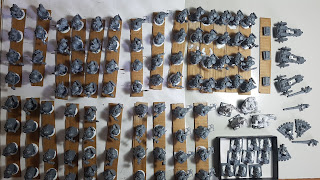 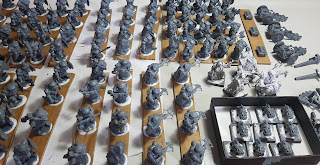 I don't wait for the glue to dry before I take them outside and spray cheap black enamel spray paint from a hardware store. I won't come back to do more on these until a day later at least, because it stinks!  I generally need to touch up the undercoat with a black paint and brush afterwards, but this spray still saves much time. 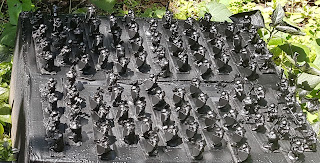 While waiting for them to dry, I get distracted and start putting together some Trident Realm Naiads... I bought a few as a sampler. I have an idea for simple painting on these involving sprayed white undercoat, a bit of basecoating and a wash, so want to see if it works ok. If it does this may not be a full army, but Kings of War lets you take an ally in your army of up to a quarter of your points, so small 500 point contingents are a fun way to add some different units without committing to a full army (though knowing it will likely end up as a full army before too long...). 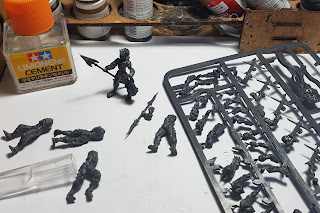 Next will be the first painting of the Dwarves!
at 09:20