Kings of War: The Mammoth Hunt!

A scenario game today at the local wargame club. Andy brought along his Kingdoms of Men vs my Herd for the Mammoth Hunt! A 1000 point Kings of War game played on a 4' x 4' table. 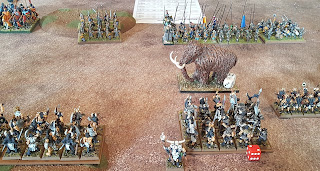 'The Great Hunt' narrative scenario was published yesterday on Dash28, and Andy and I decided to  give it a try. You can read more about the scenario at the link, but to summarise there is a wounded mammoth stuck in the centre of the table. Both sides are trying to capture its "Frozen Heart" a sacred artifact that can only be claimed in ritual close combat. The mammoth thrashes around when you fight it doing damage to units attacking it. Whoever has the heart at the end of the game wins! 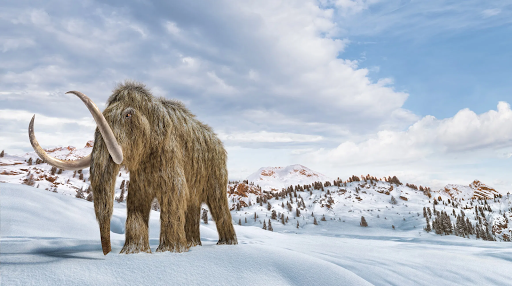 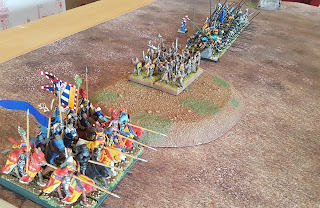 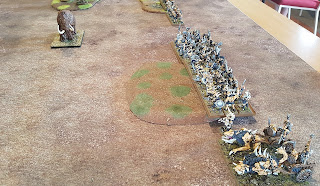 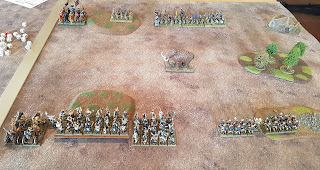 My Trappers scout forward before the first turn. 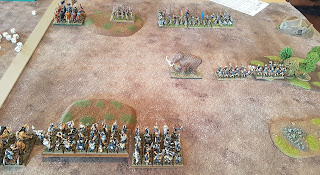 Kingdom's of Men win the first turn roll, and make my Herd go first.  I charge the Mammoth immediately with the Longhorns, doing seven wounds to it (and taking half that in return, not sure why dice says 5, it should be 4)! All my archers shoot the Foot Guard in front of them, doing 3 damage to them. 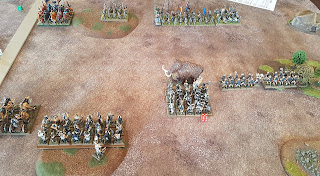 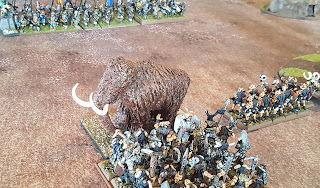 Men advance forward, and I back off from the Mammoth and heal the Longhorns with the Druid. The Trappers all step back and shoot the Foot Guard and Pike doing a couple more wounds.

Men's turn and they decide to charge the Mammoth with both Pike units, doing another 5 wounds to it. The Knights charge my Chariots doing 6 damage to them. 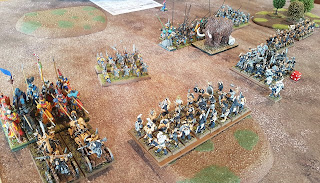 My turn three. My Warriors charge down off the hill  into the Foot Guard, while my Longhorns move to support my left. All my Trappers and the Druid target the Pike.

The Warriors rout the Foot Guard, and the Druid's fireball and archery finishes off the Pike unit on my right. My Chariots battle back against the Knights doing a couple of damage.

I reform the Warriors to support my chariots.

Bad move, as the Knights rout my chariots and turn to face, while the other Pike and Hero charge into the rear of my Warriors. The other Foot Guard charge my Trappers.

Triple attacks for a rear charge and Bane Chant sees the Pike skewer the Warriors and rout them, and the Foot Guard chop up my Trappers.

My Longhorns charge the Pike, losing their Thunderous charge because of the Pike's Phalanx ability, but still doing 8 damage to them. My Trappers and Druid's fireball shoots down the Foot Guard on the right. The Pike (Banechanted again) and the Hero countercharge into my Longhorns and rout them.

My Archers and Druid then shoot down the victorious Pike. This is very bloody...

Turn five, and the Knights and Hero charge the Mammoth and kill it at last, gaining the Frozen Heart (the cauldron - grabbed by the Hero), but taking much damage in the process! 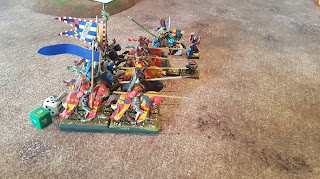 My archers and the Druid shoot down the weakened knights, and also wound the Hero though he survives the volley of arrows.

The Hero and Wizard turn and run carrying away the Frozen Heart! My Trappers and Druid chase after them but are out of range of the Hero with their Short Bows. They fire at the Wizard but miss.

And escape! Victory to the Kingdoms of Men! 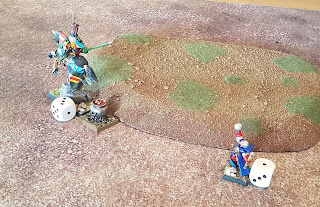 That "Frozen Heart" better be pretty damn special - here are all the casualties!

The game looked like it could go either way and came down to the last turn - well done Andy! Getting my chariots charged, and the rear charge into my Warriors were probably mistakes on my part, with the Bane Chant from the Human Wizard adding to the melee destruction each turn. I should have charged my Warriors into the flank of the Knights perhaps. At least my Druid and Trapper managed to do a fair amount of damage with their fireball/archery attacks, to my surprise!
The challenge with the mammoth is that you don't want to be the one taking too much damage in capturing the Frozen Heart. However if the enemy is doing this then they might win the prize and spirit it away as the Humans managed here. A fun little scenario to try, recommended :)
at 18:33