Next up, testing out an army paint scheme tonight. I'll spend more time on the characters, but for the approximately 100 troops in this main batch, I'm going for quick mass painting. The goal is something that will look good from a couple of feet away on the tabletop.

I'm choosing dark blue and green for Free Dwarves. According to the background in Uncharted Empires, Free Dwarves often favour blues, greens and white (colours of the land above ground), while their Imperial Dwarf cousins more often use reds, browns and golds (colours of the underground).

The Rangers will be wearing green, the war engines will be green, and most of the rest will have this dark blue. Armour will be mostly silver. The shield emblem is a stylised mountain that seems appropriate to Free Dwarves. Looking at it, it also reminds me of the sort of thing that might be a milk carton logo... but nevermind that! :)
The trouble with dark colours is that they can look a bit meh on the table by themselves. However, I think the beards, white on the shields, and bright silver armour contrasts nicely with the dark blue/green and brightens them up. 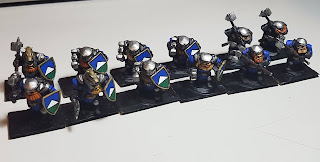 Blue is Vallejo Dark Prussian blue highlighted with Dark Blue, Green is Deep Green (which I'll use over Black Green on the clothing for the Rangers).  I used Army Painter Dark Tone as a wash over the silver amour, and Soft Tone over the beards.

The Mantic dwarves have a unique style that some people don't like, but I don't mind it, and they are also super fast to paint!

It's tempting to go into more highlighting etc, and might do a wash on clothes, but have to remind myself that lots of detail is not what I'm going for with these, so onwards to the rest of them! 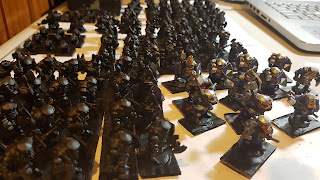