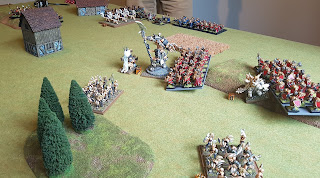 Game was control scenario, so goal is to hold as many as possible of the six table sectors. As usual terrain was set up with Lars Random Map Generator from the Dash28 site.

Setup has the Dwarven centre full of shooting, with melee troop on the flanks. The Warsmith is giving his reroll one's ability to all the artillery and Ironwatch. 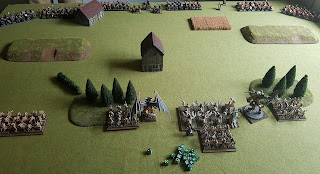 Undaunted I charge straight for them...  The two flyers have stealthy so -1 to hit them with ranged attacks. Seductress also an individual so another -1. I figure if the Dwarves try and target the flyers it will also at least save the other units... 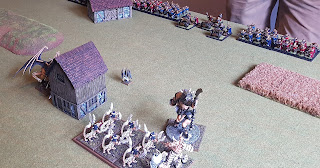 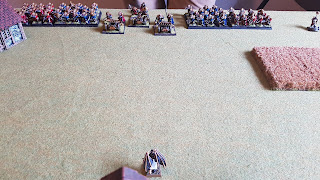 Mr Ba'el and Seductress charge in and disorder their targets, though disappointingly the Seductress does not kill the cannon in a single round. 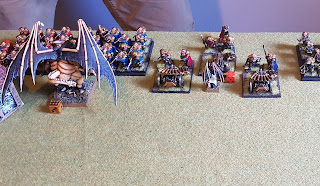 The Dwaves begin their second turn, advancing their flanks and shooting again. 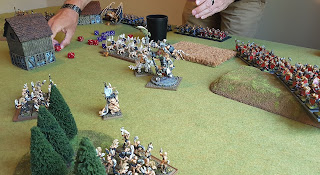 The Dwarf Lord charges Molochs in the flank and does a wound. Throwing mastiffs hit the Despoiler champion for three wounds. Abyssal Fiend takes another three wounds from Crossbow but doesn't die. 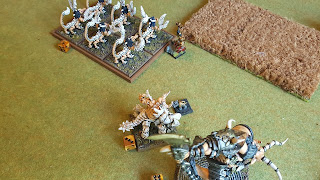 Other throwing Mastiff hits Succubi in woods and does 5 damage! Mastiffs can smell 'em and ignore the Succubi stealthy and cover modifiers for range attack. 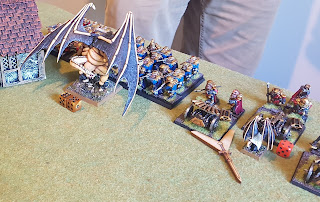 The Rifles reform and in my turn I charge the Molochs in, doing a bunch more damage but not routing them. Seductress finishes off the cannon. 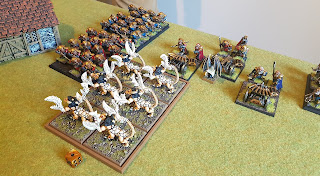 Warsmith has charged the Seductress but he fails to wound her. Both Organ guns blast the Molochs and destroy them... 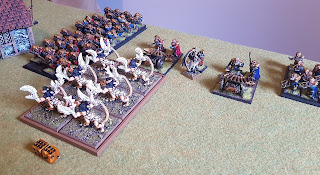 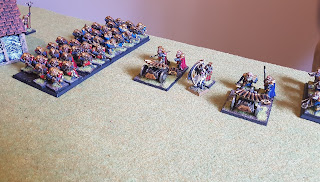 The Dwarf Lord charges the Warlock and wounds him. 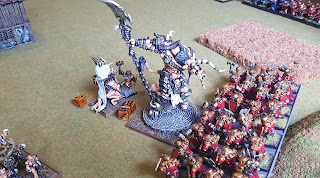 Fiend and Despoiler Champion are killed. 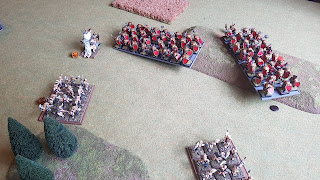 Seductress and Warlock doubleteam the Dwarf Lord who takes a couple of wounds but fights on. 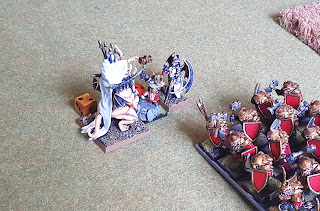 Handy hint... you know a game is going badly, when all the Dwarf War Engines and shooting units, start rolling forward turn 4...

On my left an Ironclad horde has been pushing forward into a storm of Flamebearer firebolts for 3 turns... 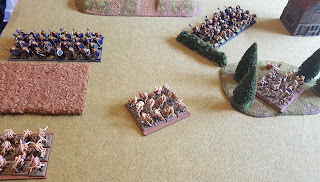 And they are finally broken... 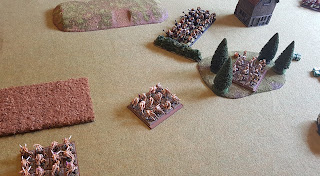 The Flamebearerers then turn and blast the Ironwatch Rifles, who have taken 17 damage, but nerve roll is a double 1 and they live! 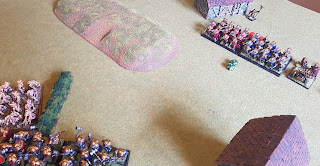 Warlock has been killed, but Seductress wavers Dwarf Lord and prepares for killing blow... 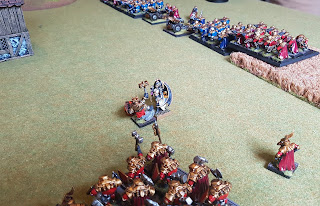 What is this? Surely Martin would not interfere in this contest of honour between two heroes?!

Actually he would, the Dwarf Warriors seeing their Lord in danger, charge in and kill the Seductress. 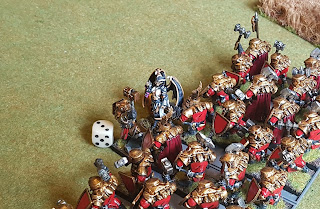 The Hammerers finish off the Succubi in the woods. Game goes to turn 7 and I take out the Ironwatch Rifles with the Flamebearers. But game is over and I only have the two Flamebearer regiments left. Dwarves have lost their Ironwatch Rifles, one of the Ironclad units and the cannon... 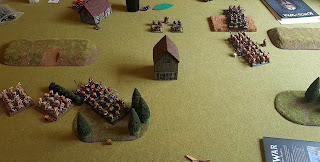 Another fun game despite the disaster, thanks Martin! I need to get a better feel for the punishment these Abyssals can dish out and take in various situations, more practice needed! :)
Martin also says he has Ogres, Goblins, and Elves in process, plus he also has Abyssal Dwarves and Abyssals in boxes! I'm working on Dwarves and Orcs, plus a few Trident Realm (the Frog part anyway...).
at 09:17