Three more games of Epic over the weekend. Here's the first where I focused on taking a horde of  infantry, along with some Lictors, Trygons, Exocrines, and Zoanthropes but no Bio-Titans. I was facing Nick's Marine army again.

In addition Nick brought around the bombed out cityscape scenery he has been working on so we could give that a try! Great idea and very nice even if it isn't finished yet. It gave an interesting challenge to both sides.

Here's an overview of the battlefield and deployment. As you can see Nick has made some MDF sabots for the ruin bases, not finished painting it all up but I think it still looks great. Much better to have all the roads rather than just ruins dumped in a green field!

Nick has garrissoned two Tactical formations in the ruins in the centre of the table. And looking at it now immediately I notice that he shouldn't have garrisoned one of them because it has three rhinos! (Mechanised units can't garrison in the standard tournament scenario unless they are scouts or have only a single fast vehicle like an AA support). Doh my fault for not noticing them - the camouflage is too good! Anyway it was a small detail that had no real significant impact on the game I think. 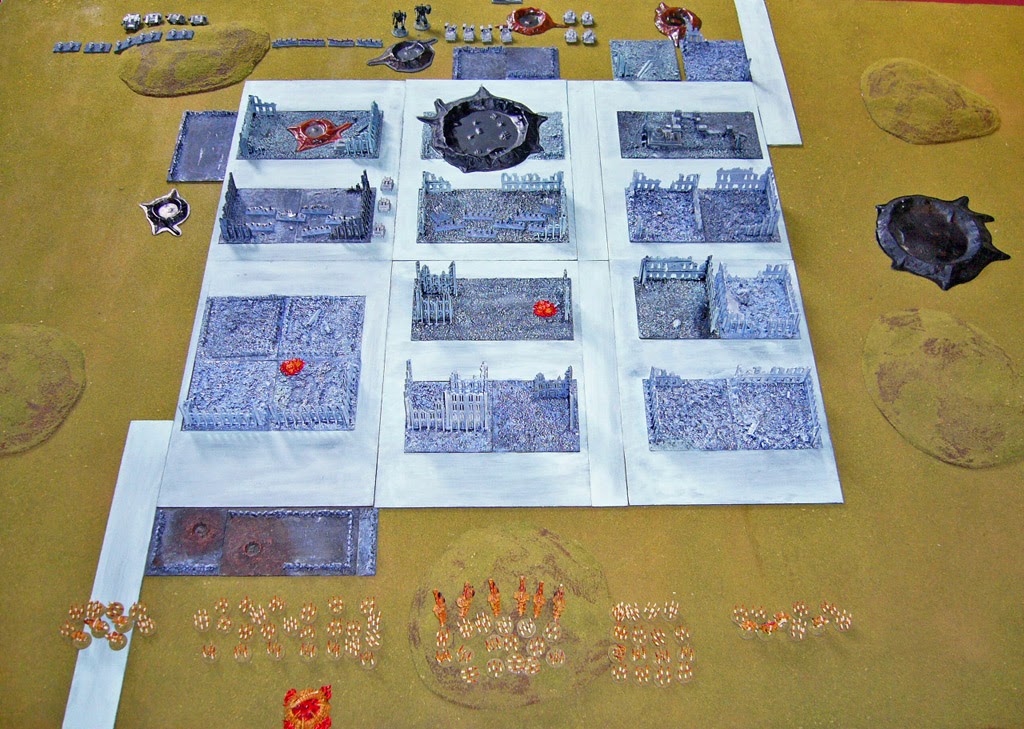 Also just to clarify how the terrain was played, all the ruin areas offered cover and blocked line of sight, except the areas highlighted below which were cover for infantry but did not block line of sight. 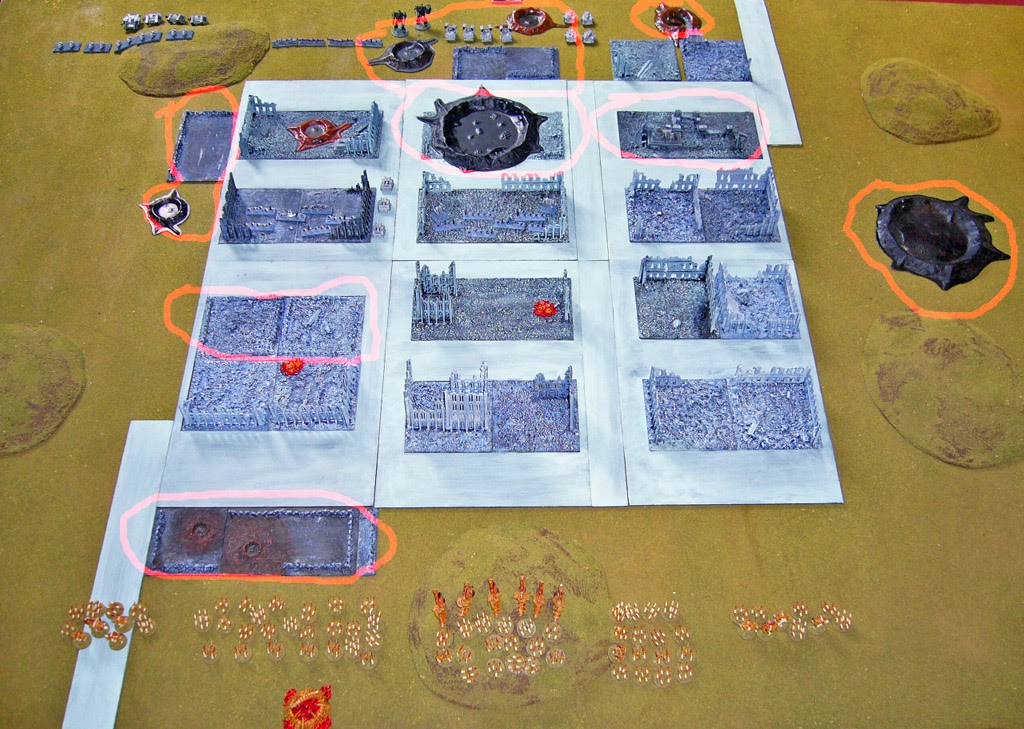 Nick wins the Strategy Roll and I advance a swarm into the ruins immediately ahead. Nick fires overwatch from a marine formation putting a blast marker on them. He then doubles his Predators down the road and fires killing an Exocrine. 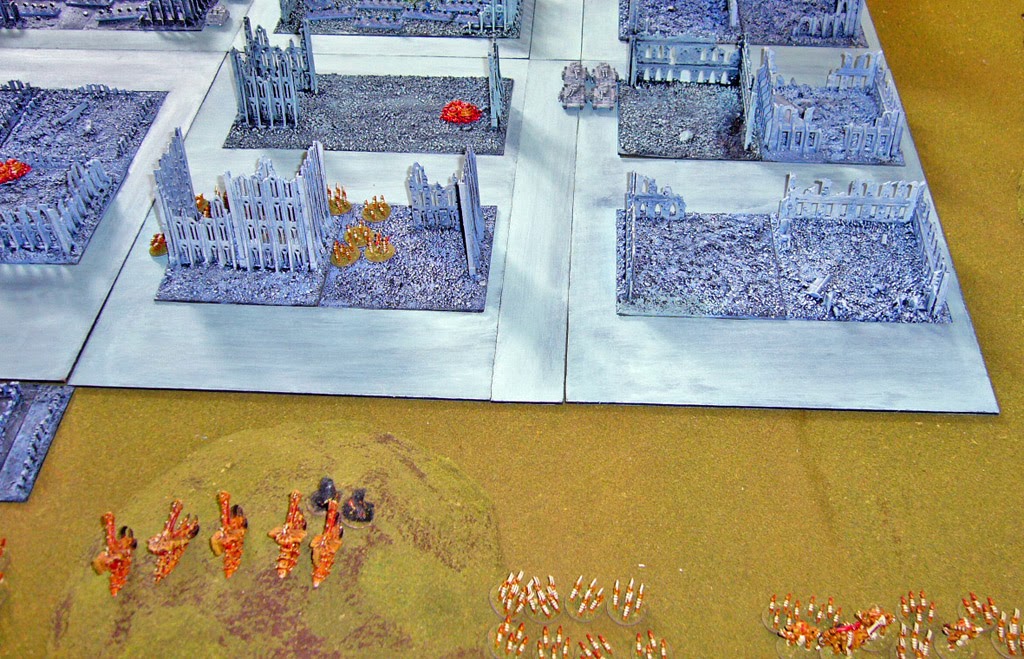 Both sides continue to advance, with me managing to kill a Predator, and Nick placing more blastmarkers and killing a few gaunts. End of turn one we hold about half the town each, ready for a close encounter next turn! 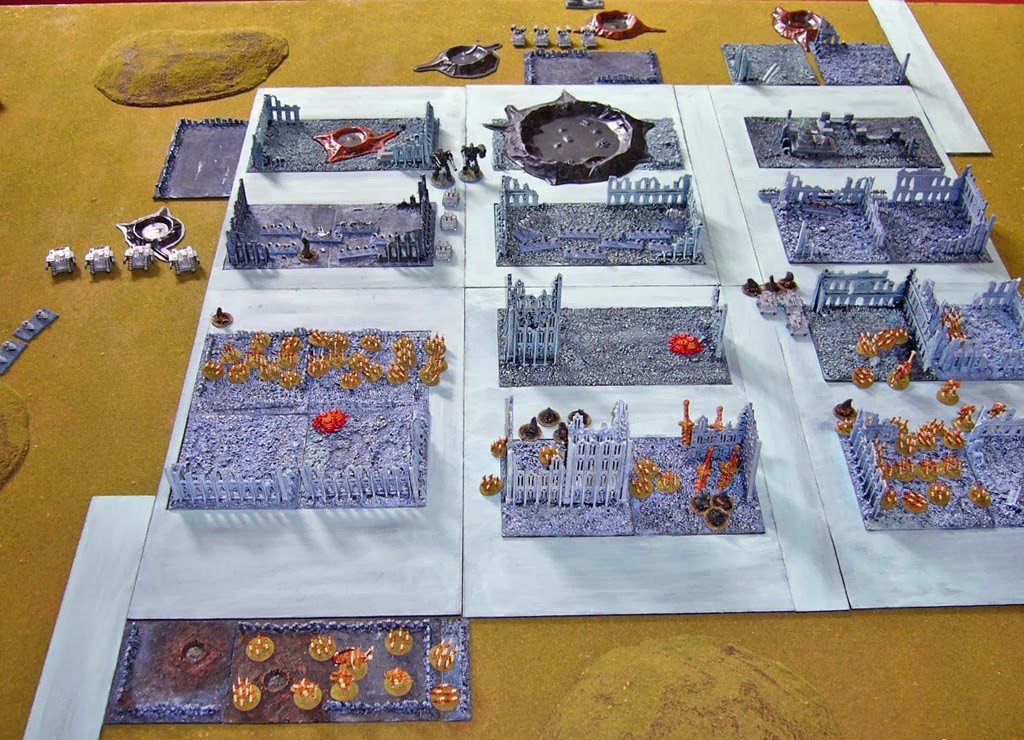 Nick teleports his Terminators down on his right flank in front of his Tacticals and near my largest swarm. 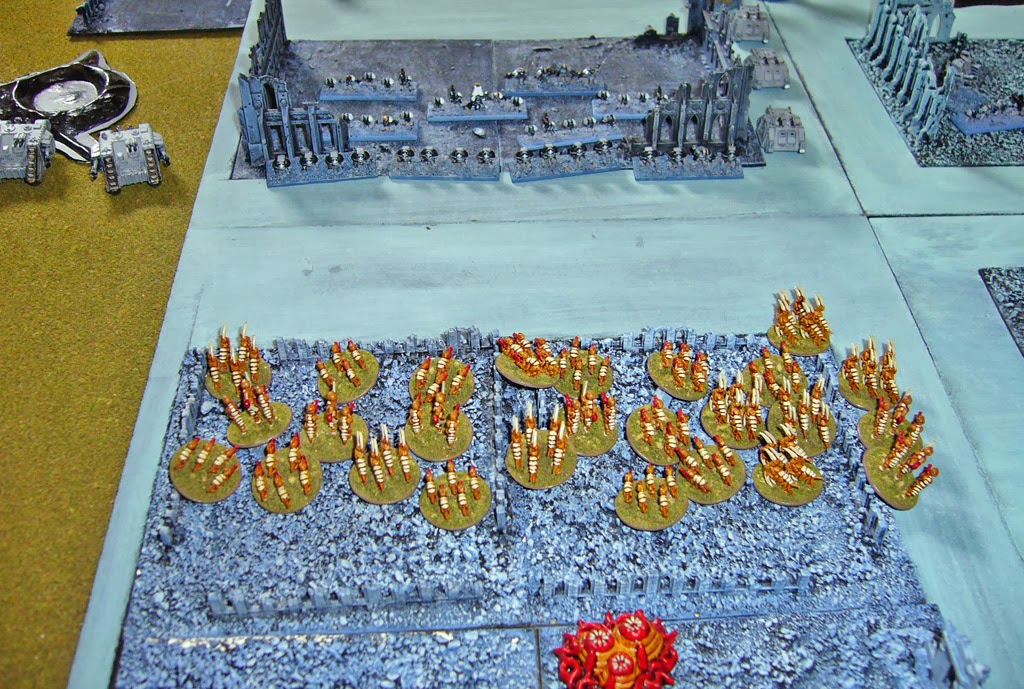 I teleport (actually representing them sneaking up in ambush for these critters) both Lictor broods  in his rear zone ready to pounce on his artillery. 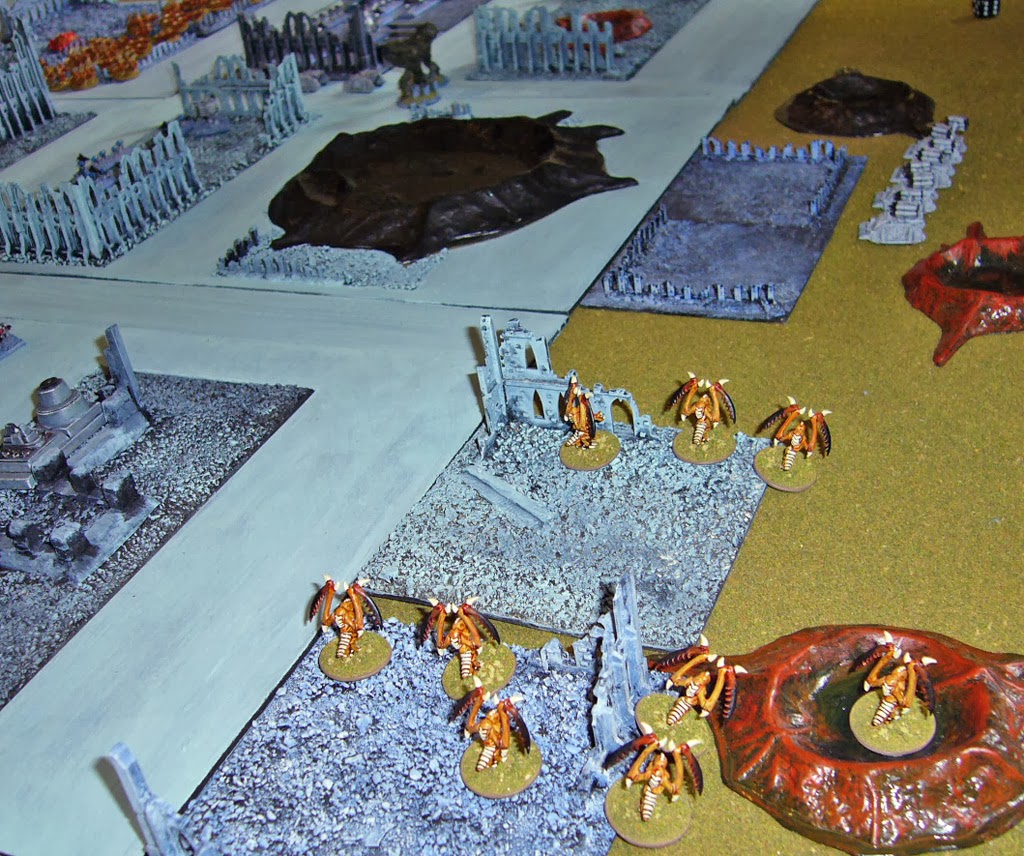 Marines wins Strategy Roll again, and the Predators drive back down the road, firing and wiping out the brood of 3 Lictors. He then retains and fires with the Whirlwinds, killing another Lictor from the six strong brood. I try to activate the Lictors but they fail and instead just move into the crater to their right. Having no Supreme Commander I can't reroll the result and hence the initiative passes back to the Marines! 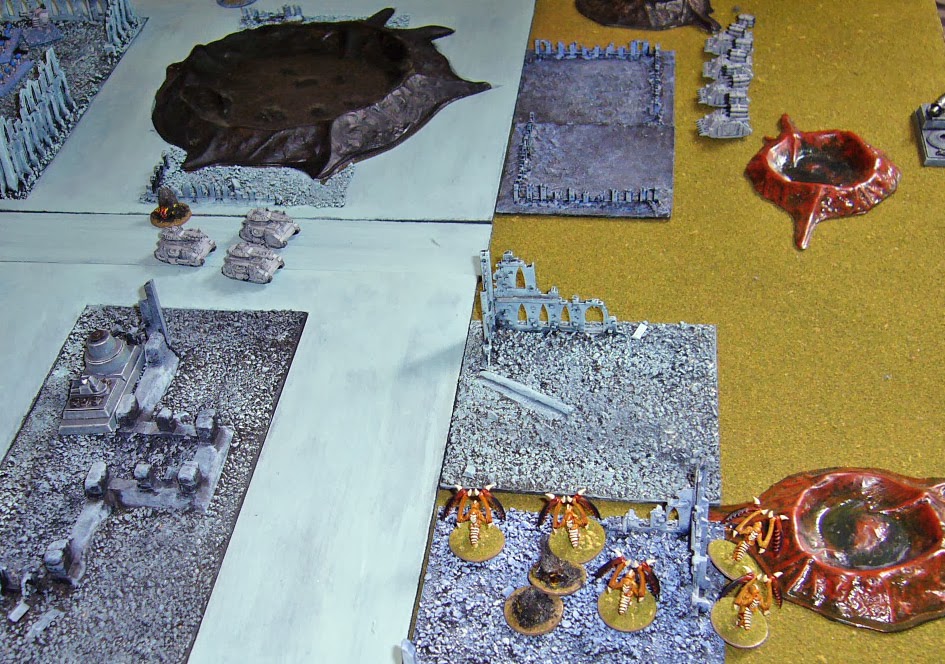 Nick moves the Bikes to do a clipping firefight assault against my biggest swarm, after I clarify to him that this is the probably the best way to do the flanking attack he is trying to do here (him being relatively unfamiliar with the rules). The bikes advance to firefight the flank of the swarm and in this situation I'm pinned and taking support fire from the formations in front of me i.e.Terminators, Tacticals and two of the Landraiders! With casualties and assault resolution roll, I end up losing a heap of the gaunts, but most of the Tyranid Warriors (the important Leader bugs who were in the back rank) survive and retreat back to my Blitz. 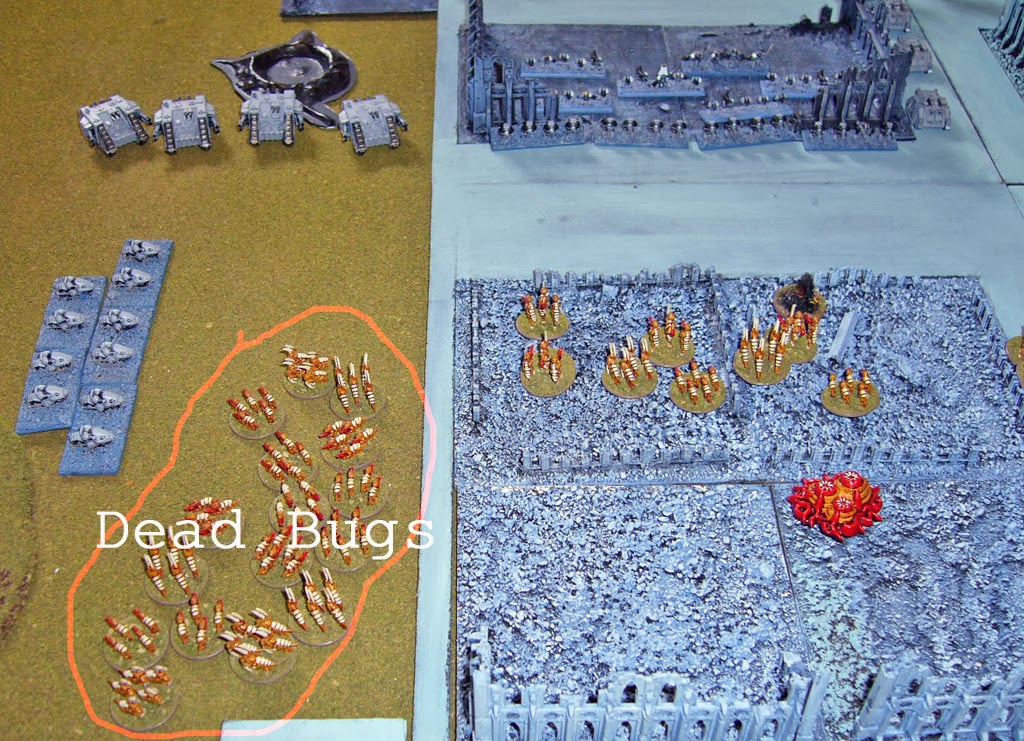 Nick then doubles the Warhounds over and shoots the Lictors, killing three of them (and the Warhounds using Plasma Blast guns in the process which take a turn to recharge). My two Lictors retreat back behind a hill. 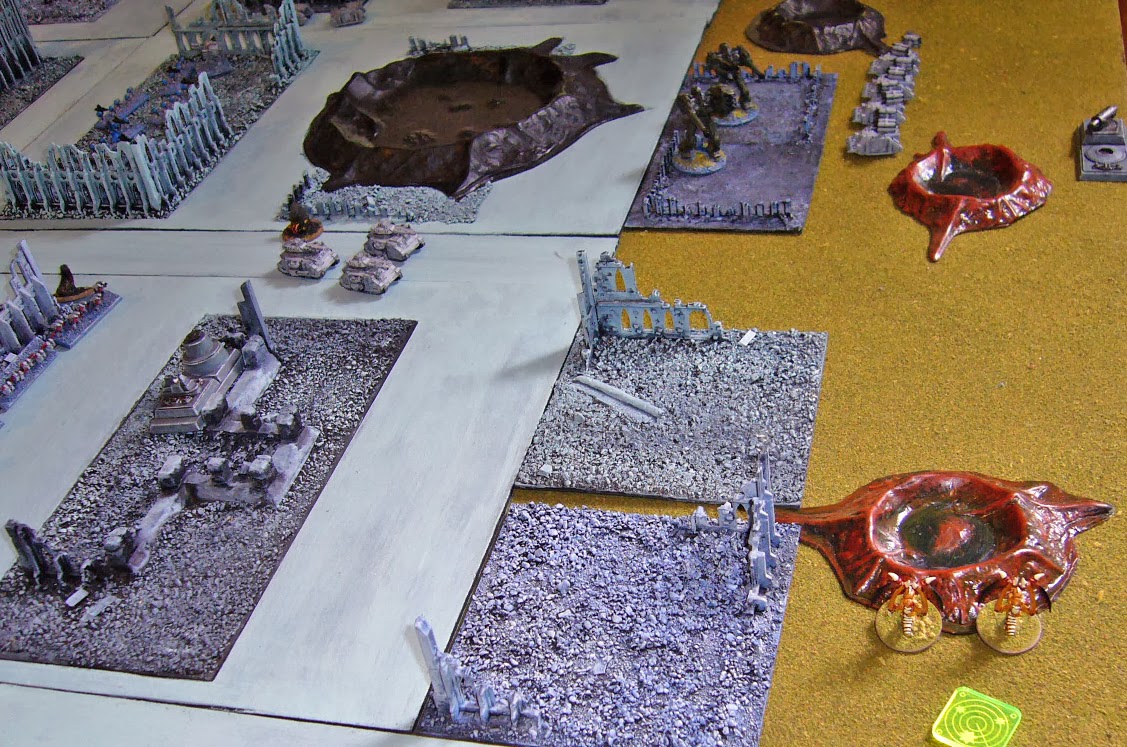 I advance a swarm firing at the Marine Assault detachment and then a second swarm wipes it out in a firefight for the loss of 3 gaunts. 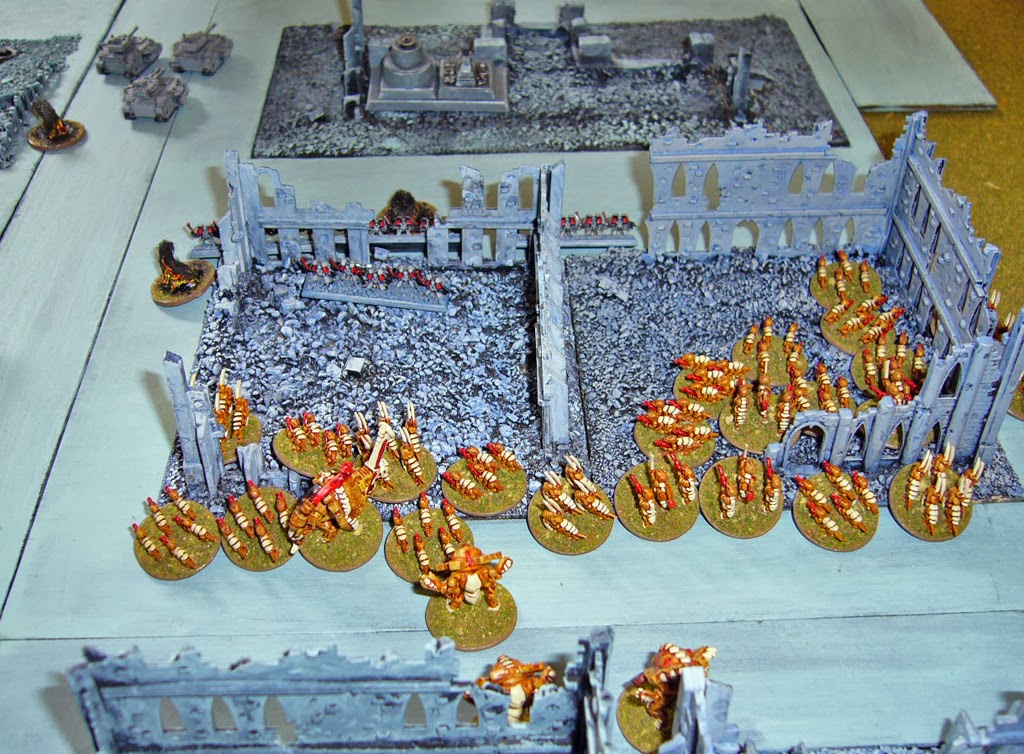 A Zoanthrope kills one of the Marine Bikes, and the more fire is exchanged in the centre. End of second turn and the Marines have pushed forward on the left a little more and me on the right. 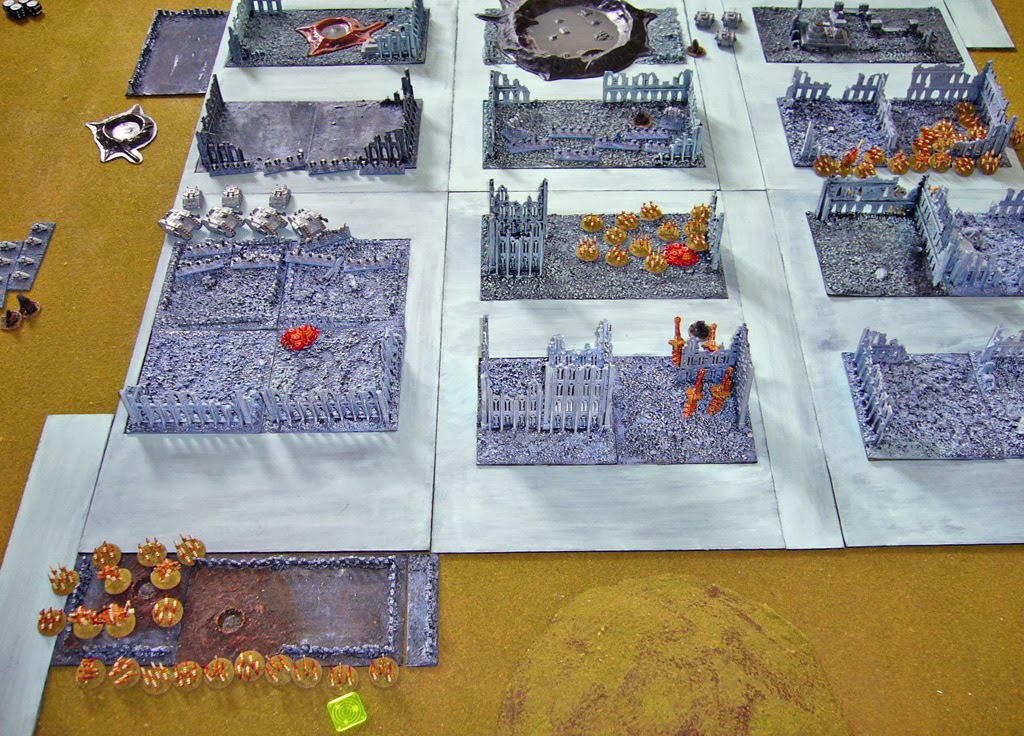 My tunneling Trygons burst out of the crater near the Marine Whirlwinds. Unfortunately for me (but not unexpectedly) the Marines win the Strategy Roll and immediately crossfire them with the Predators and then the Warhounds. 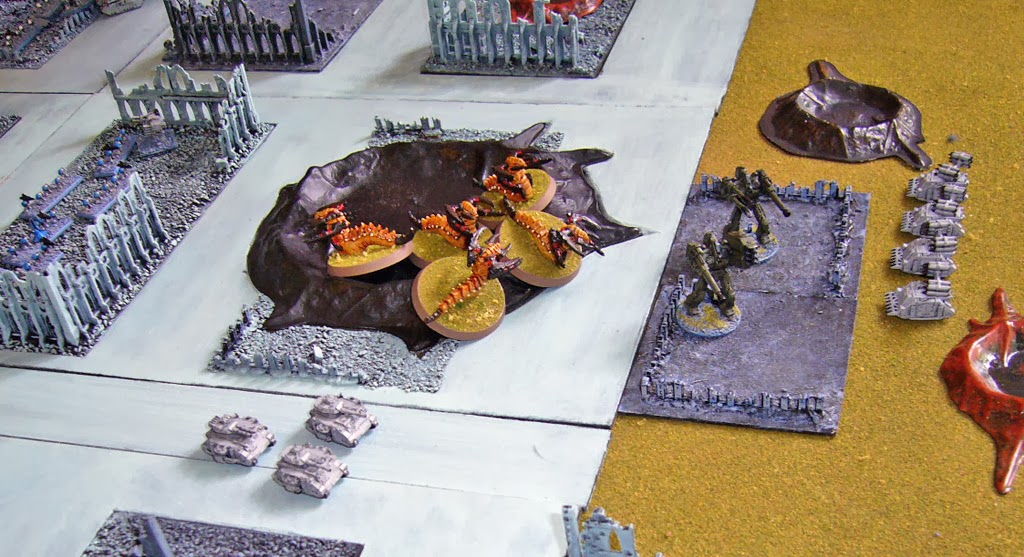 One Trygon is killed and all the rest are wounded and they break and retreat over to where a number of Lictor carcasses lie. 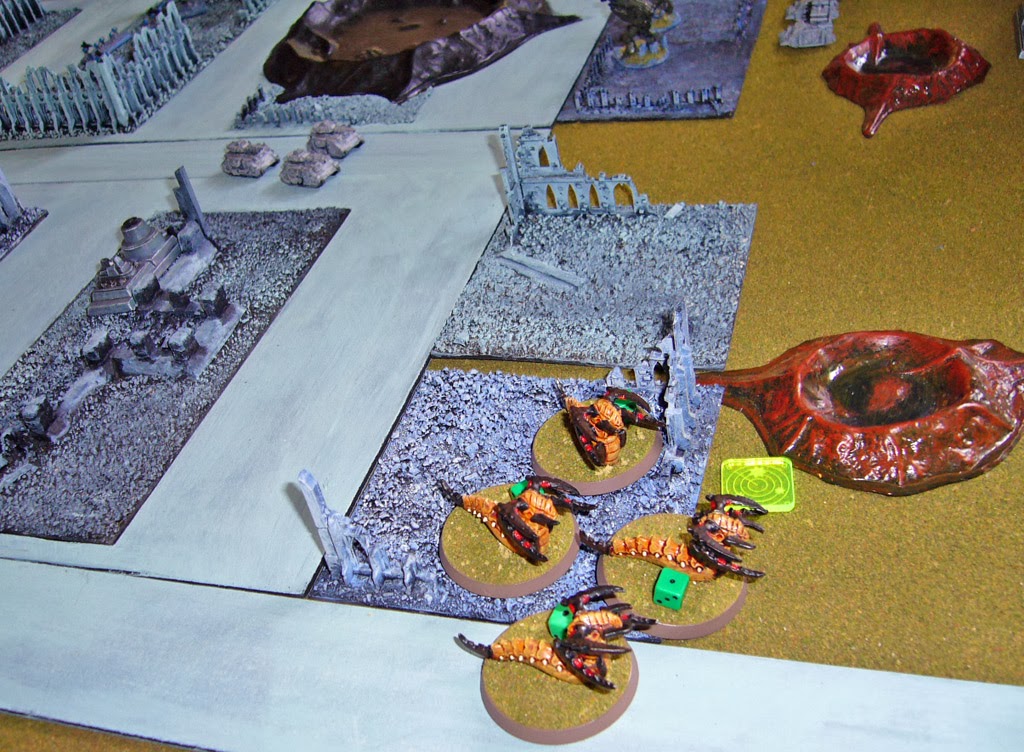 I get some revenge, launching an assault on the Tactical Formation in the centre ruins with support fire from another swarm. The Marines are wiped out. 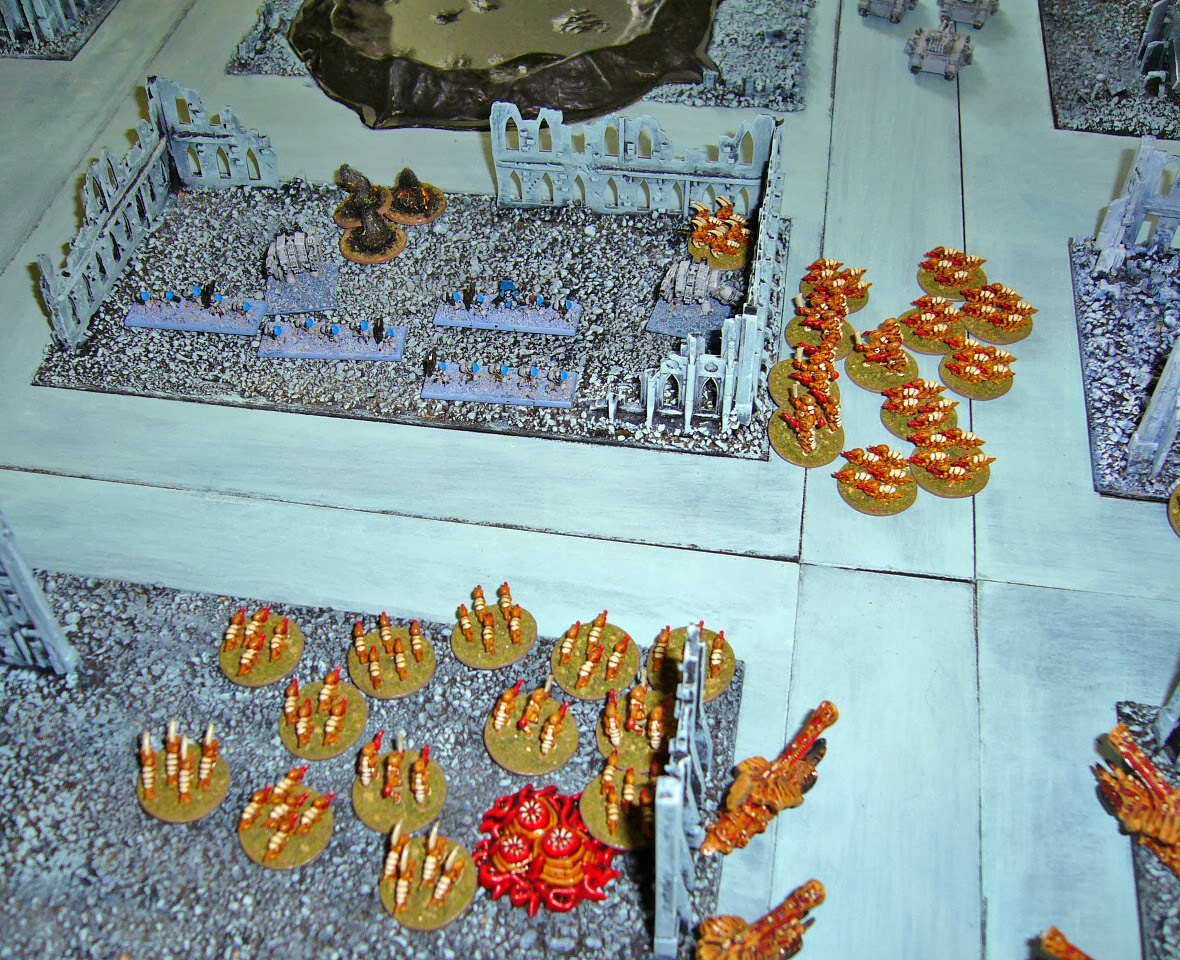 The Marine Landraiders kill a Zoanthrope from my rightmost swarm. 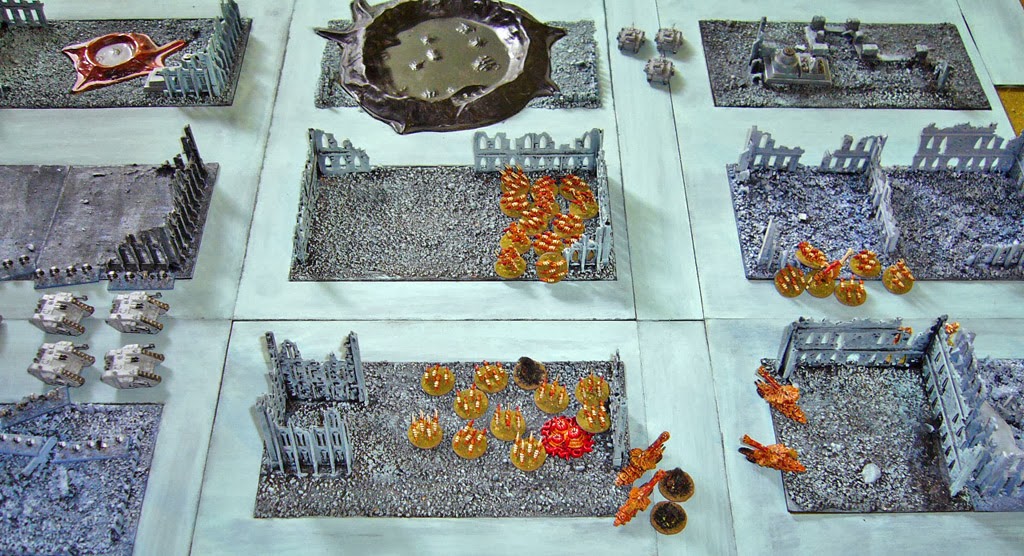 And then the Terminators firefight one of my central swarms killing all but two warriors for the loss of one Terminator stand. 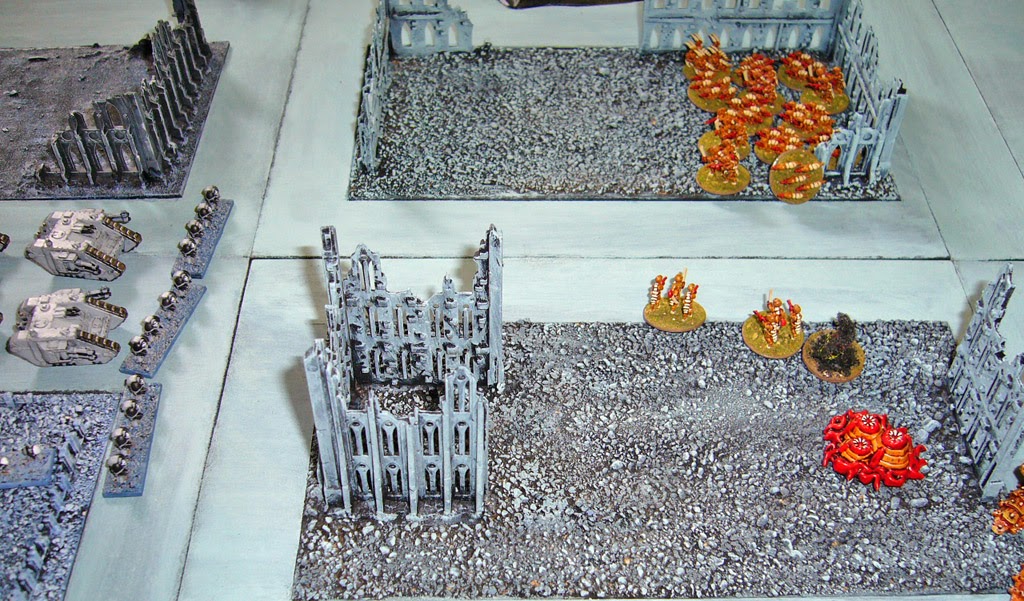 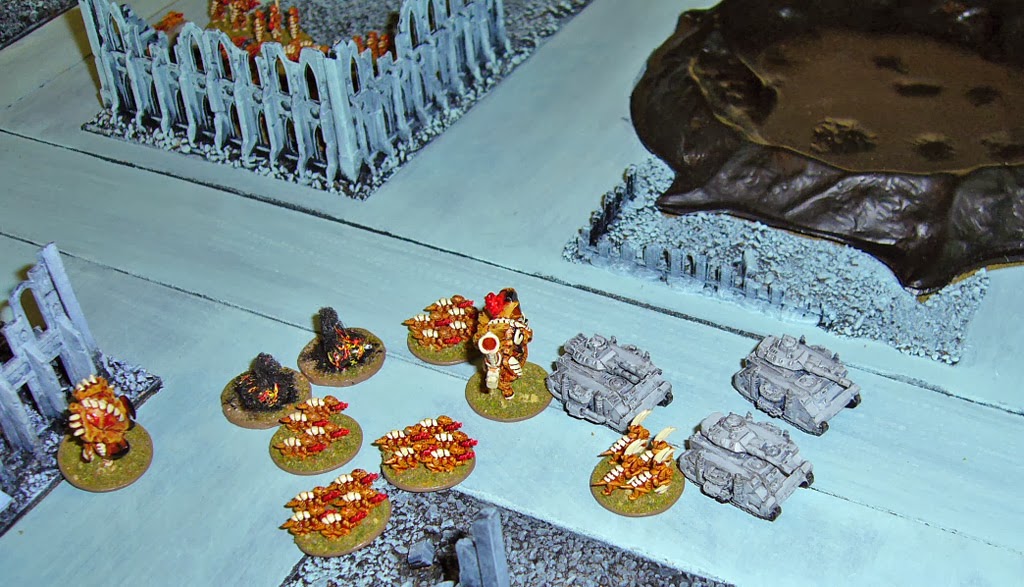 End of turn and both sides are looking thin on the ground. The Marines have lost three formations, and many of my swarms have lost large numbers units. My large swarm that took huge losses in the second turn is getting larger again though, having five Warriors to respawn gaunts and being more than 30cm away from the enemy. Both a Marine and Tyranid formation in bottom left of the photo have gone on overwatch. 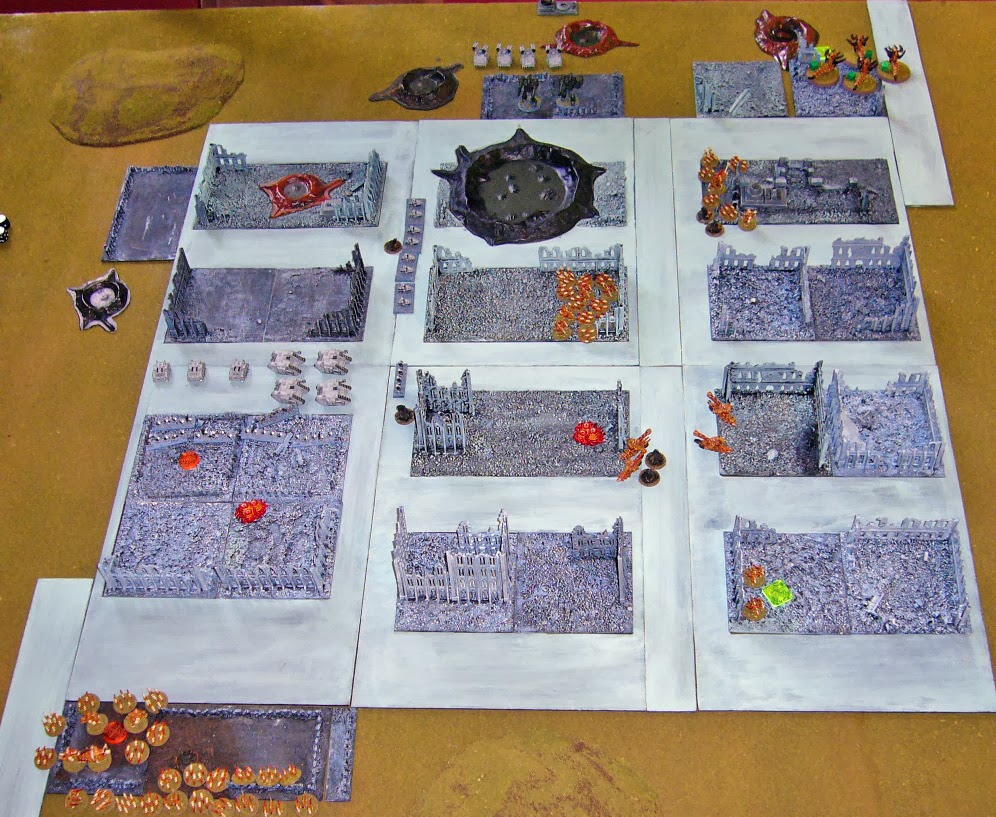 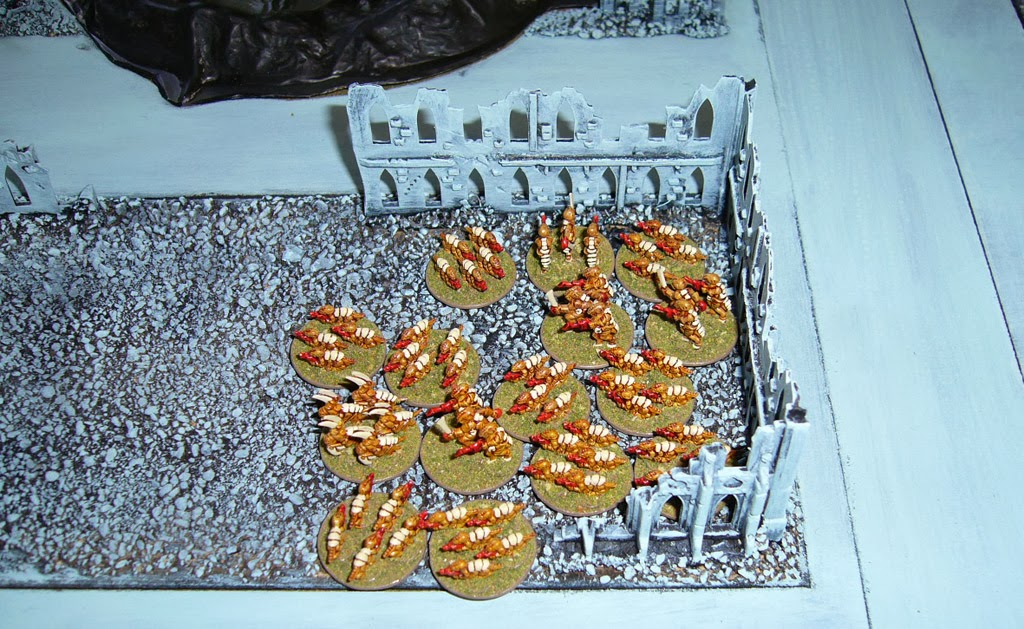 Killing a bunch of them including a Tyranid Warrior. 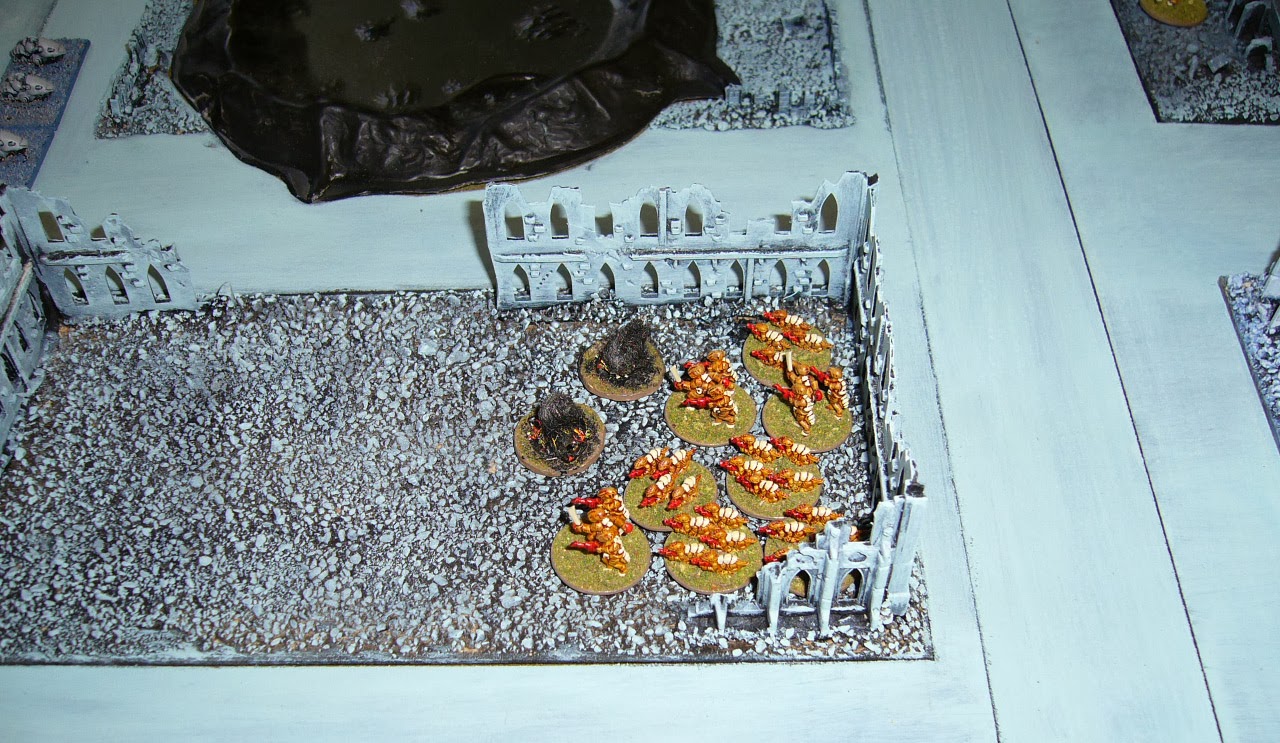 Then the Landraiders retain, moving and firing and breaking the Exocrines. 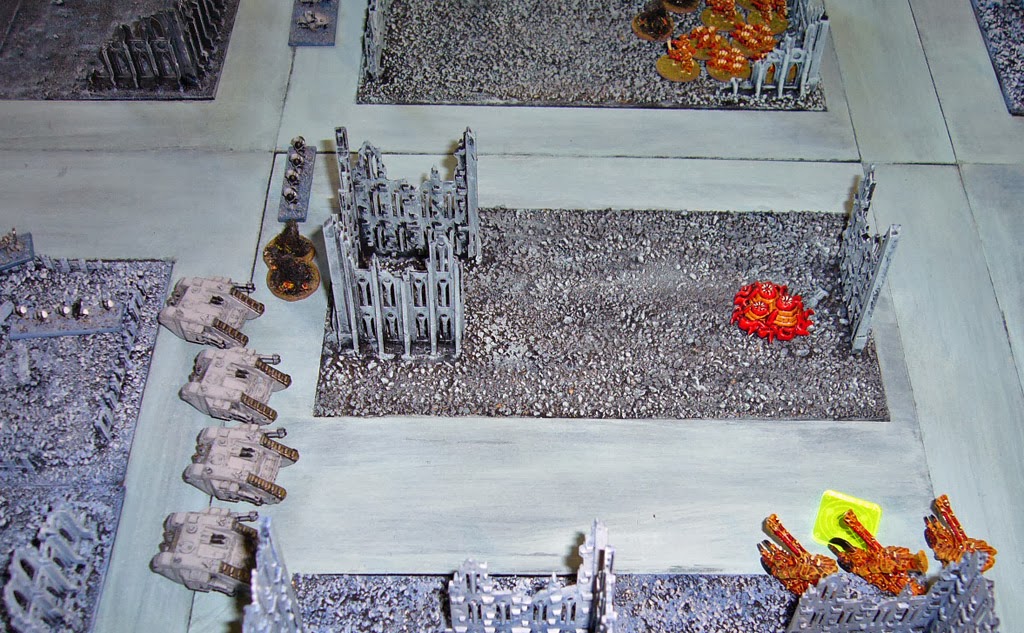 I assault the Bikes with my central swarm that just suffered the artillery barrage.  I kill three Bikes and break them, losing a Warrior and a Gaunt stand. 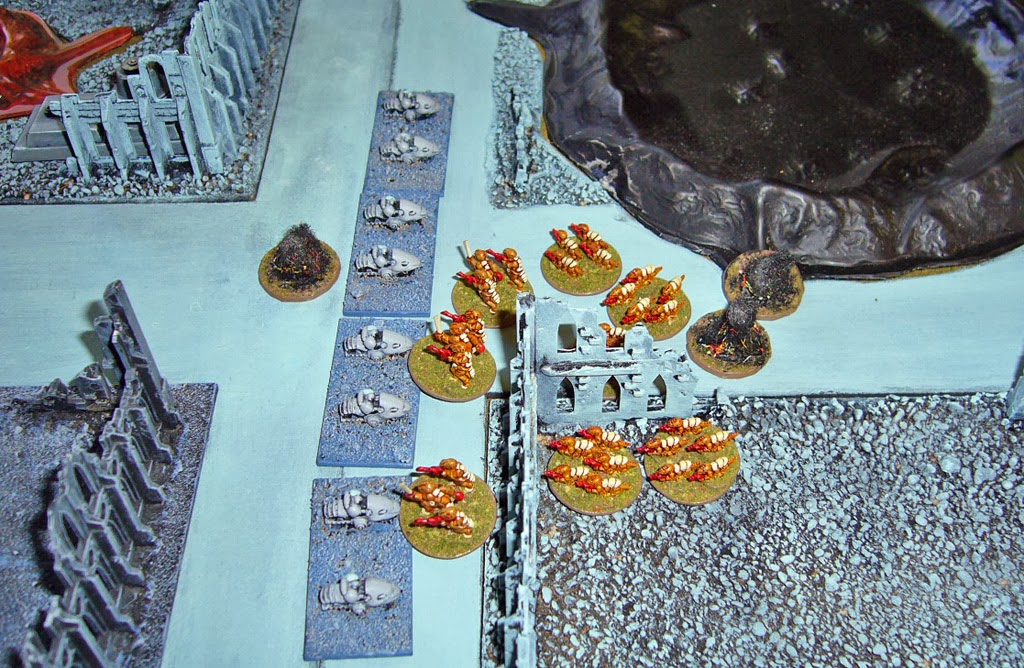 The swarm claims one of the take and hold objectives.

Marine Warhounds thin out my right most swarm again, and then the swarm is broken by the Terminators. 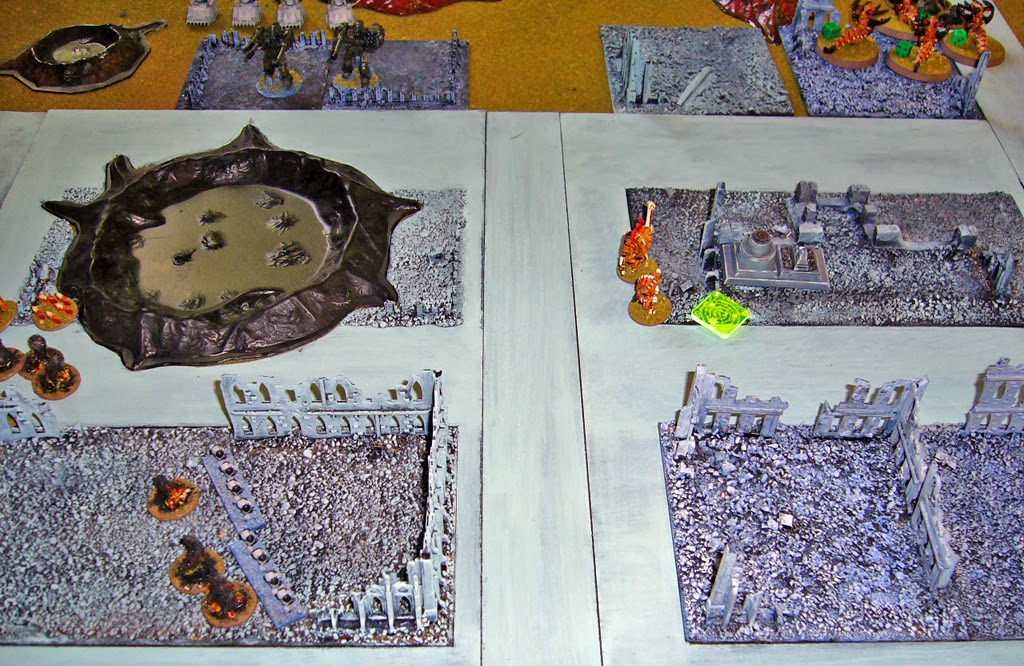 I try and fail to activate the Trygons. They move a single move uselessly towards the Marine Blitz, not even getting close enough to contest it. 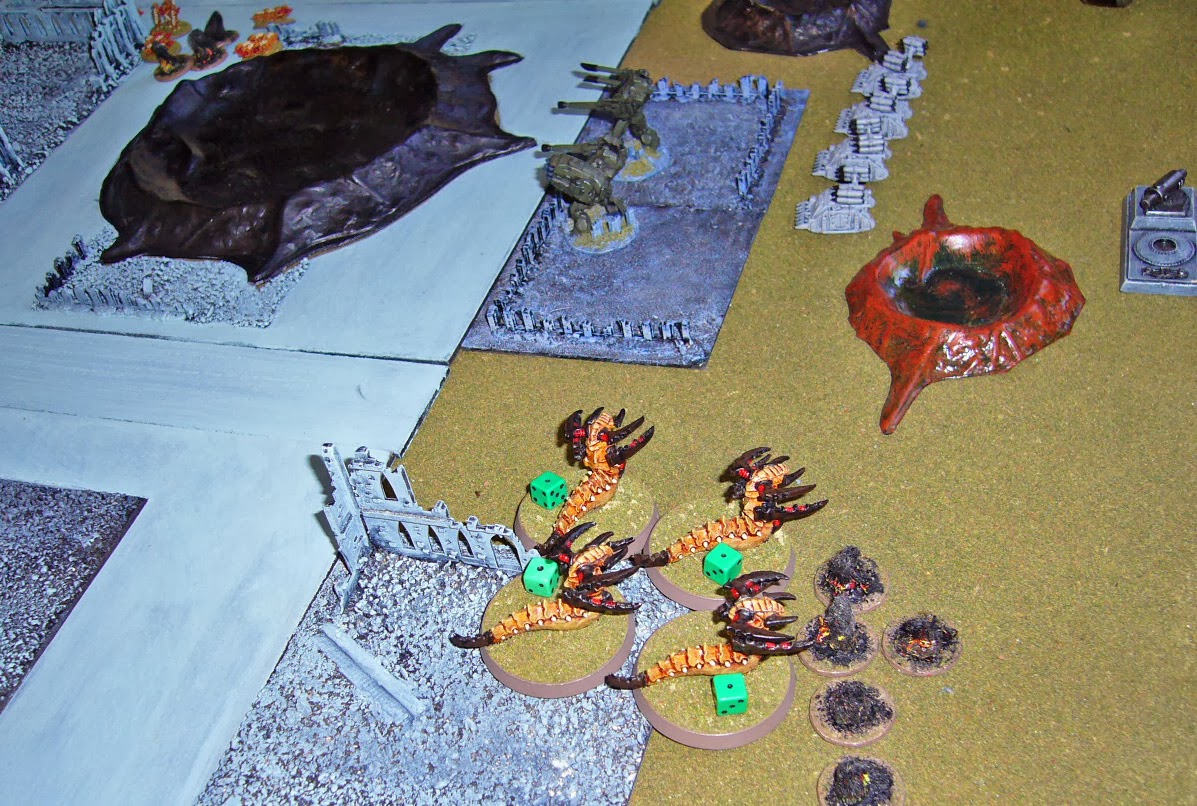 I decide to risk everything on one last gamble to win via objectives rather than having the game go to tiebreak which I don't think will favour me. I double my large swarm up to grab one of my objectives, and also shooting and breaking the Terminators which only needed one more blast marker to suppress them. I then engage with my other Zoanthrope swarm against the Landraiders and the intermingled Tactical formation. I will have support fire from my largest swarm and if I win I break the two Marine formations, thus holding all my own objectives (Defend the Flag Objective), and meaning their will be no enemy formations on my half of the table (They Shall Not Pass Objective), giving me the victory! Brilliant! 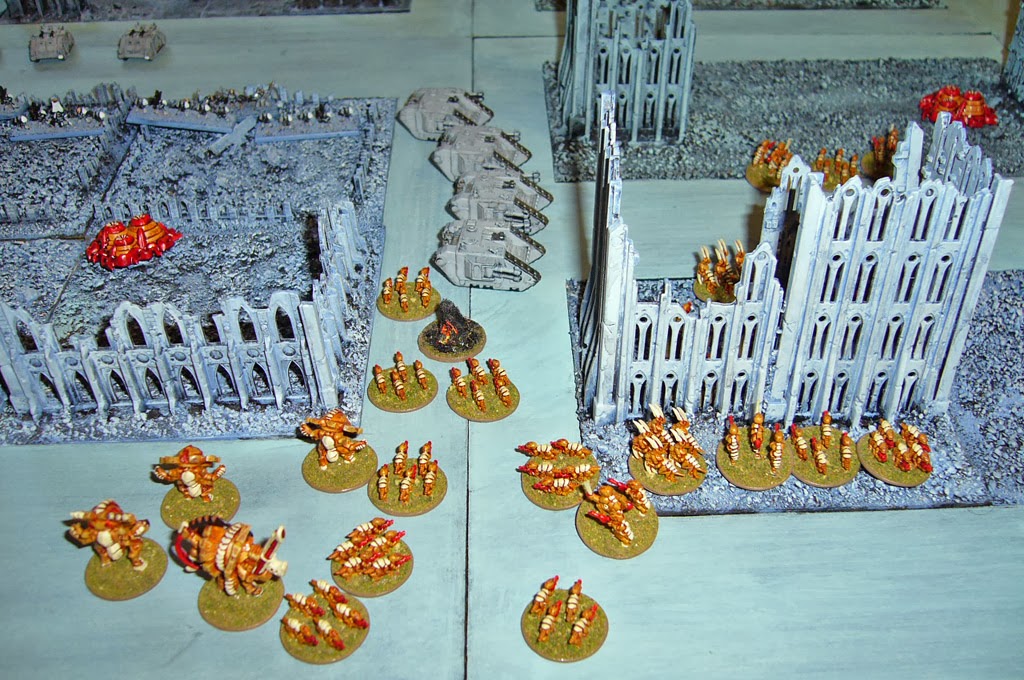 The Marine Tacticals overwatch and countercharge, and things go not very brilliantly after all. My support fire bounces harmlessly off the Landraiders which make a gazillion saves, so that I end up killing only one Landraider and one Tactical Stand while taking many casualites in return. With combat resolution all my units except the Hive Tyrant are wiped out! 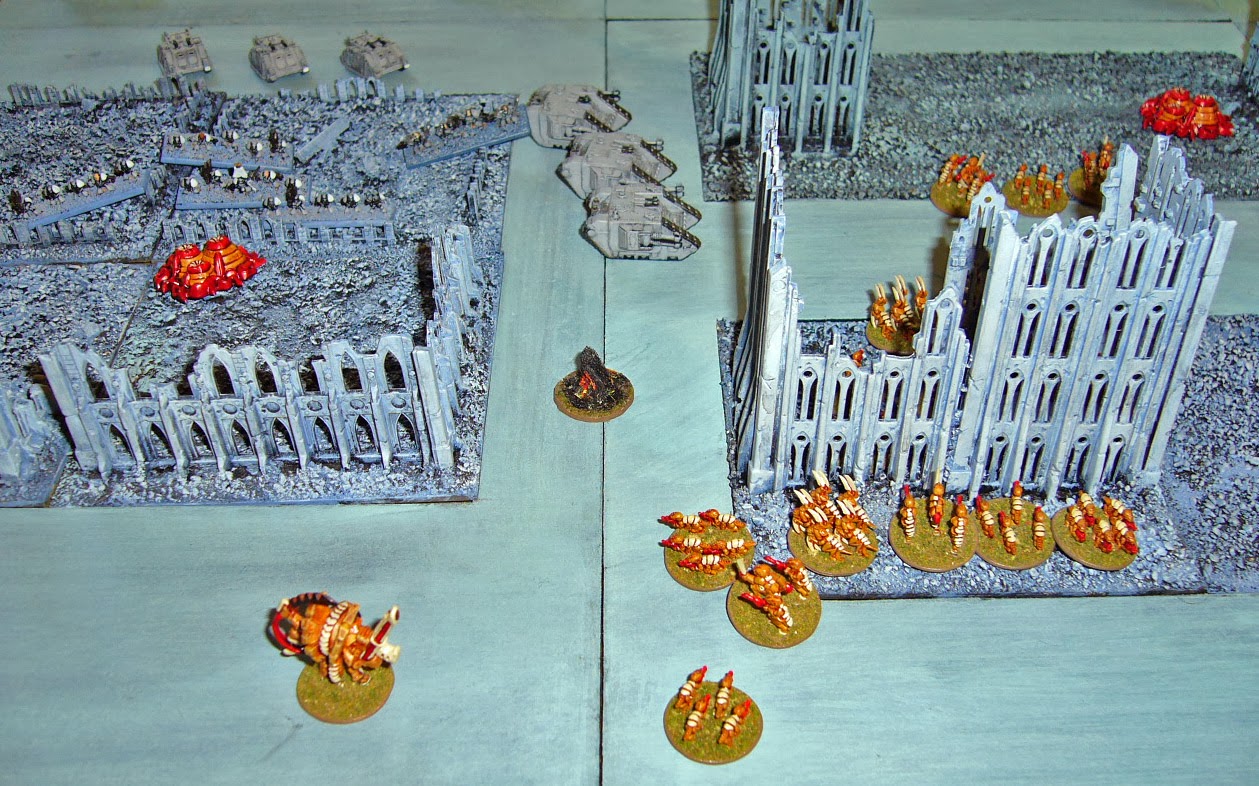 End of game, both sides are exhausted, with no Victory Conditions achieved. Tiebreak is won by the Marines by about 140 points! If my Zoanthrope formation hadn't been so beaten up in that last assault I would have lost by about 5 points. Very close! Well done Nick! 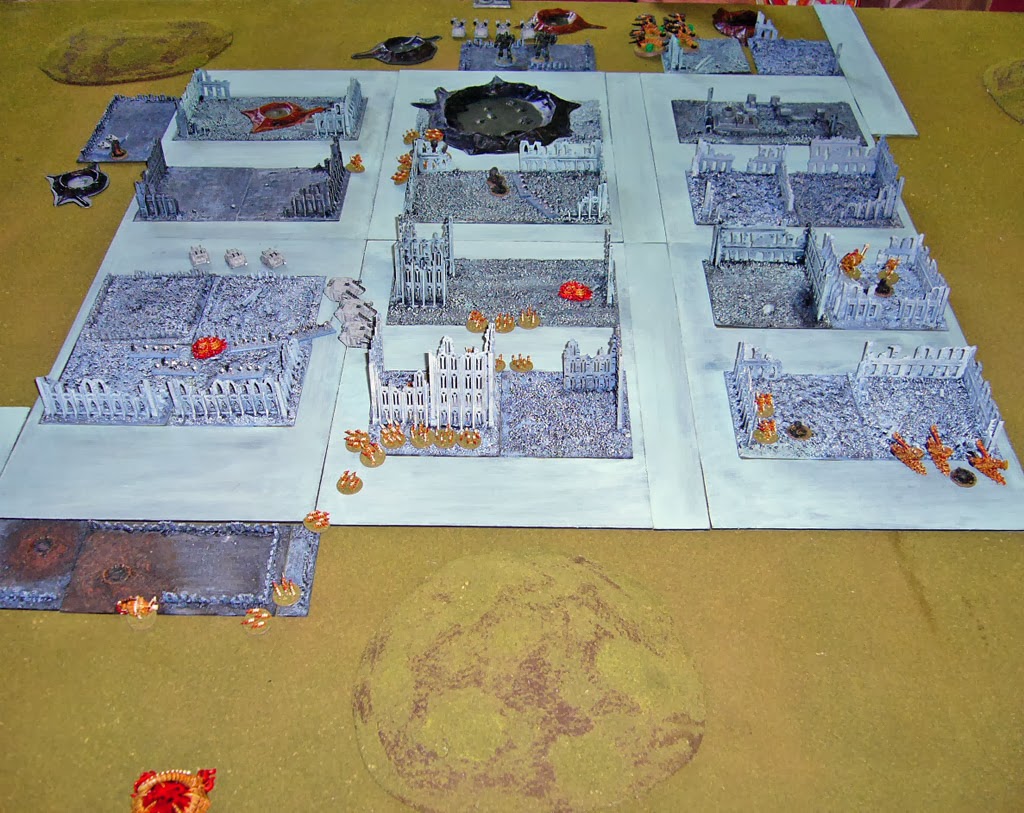 Great close game, and really interesting to be fighting over the cityscape. I look forward to the next one! Nick has again done his own report of the game on his blog.
at 20:45