Game two, I got out my Dark Realm miniatures Kraytonians, versus Jesse's old school Games Workshop Space Fleet era Tyranids. With all the big vanes/sales on the Kraytonians I use them as Craftworld Eldar in BFG.  I sold Jesse the Tyranids about a year ago and he and another local painter did great job painting them. Once again we used the BRG revised rules.

Jesse's Tyranid list was:
Jesse's full sized Hive Ships are still being painted, so he took just three of the baby ones in this game. They are still tough but have lower leadership for the vital command checks.

Here's the start of the game, my table edge is the sunward edge so I have the solar wind in my favour (Eldar move using the solar wind like sailing ships using the wind in other naval games). The Tyranids move first and advance on all ahead full in a big swarm. A few of them end up close enough to fire on my Pulsar armed Wraithships on the left. They open fire, damaging one of the Wraithships, wrecking its mast (so it can't turn until repaired!), and  starting a fire. In the end phase I manage to put out the fire.

In my turn I move aiming to get around the flank and rear of the swarm.

My Wraithship squadron with the damaged mast  (far left in below photo) flies all ahead full to get out of the way of the Tyranid fleet.  My Void Dragon also steers clear, and launches its 4 bombers. 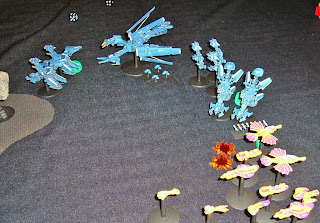 The other Wraithship squadron and Shadowhunters attack the flanks of the swarm.

I destroy some bug ships on the right flank of the swarm, while my Shadowhunters on the left fire ineffectively at the Hive ships (the 3 triangular shaped ships to the rear). My bombers advance to intercept any ships that turn towards my ships in the bug turn.

The Tyranids manage to turn some of their fleet, while others blunder around instinctively.

Tyranid fire kills a Shadowhunter on the left, and cripples a Wraithship on the right.

Next turn, my Eldar sweep around behind the Tyranids, and concentrate all fire on the Scylla Hiveships, killing one of them and slightly damaging another. My bombers make their attack runs but only kill a drone. I use no special orders this turn, to increase the chances of the Tyranids failing their command tests. 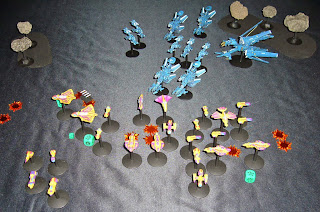 Tyranid turn, and they fail almost all of their command checks and so are unable to turn and fire quickly enough to catch the eldar. They remain stuck in a big clump with the vital Hive Ships exposed  and separated from the rest of the fleet out on the left. Jesse concedes,  as next turn my entire fleet will be moving and firing unimpeded at these two remaining Hive Ships - the loss of which will leave the rest of the Tyranids milling around in confusion. Quick game! No doubt Jesse will have some new tricks (and bigger hive ships) for next time though...
at 19:13