Here's a report of yesterdays tournament using my new HOTT army, which was:

I was keen to try the double Magician as I haven't used that combination before. The simple plan was to use the Magicians to target valuable or vulnerable enemy elements - and ideally they'd do this from a position behind the centre of a line of Blades which would hold off enemy foot and shooting, with my Behemoth and Shooter helping out against enemy mounted. The Magicians worked well for the most part. You have to be careful about positioning though, as the 2 pips to move Magicians mean they are difficult to redeploy in a hurry! It's best if you can think several turns ahead in terms of both defense and offence, keeping them fairly central. You want to keep them together to save on movement pips, but being on 40mm bases, they are also vulnerable to being flanked and pushbacks and so on. I think my army selection suffered from a lack of speed too, a Rider or other fast element would have been a nice addition as a reserve, perhaps swapping out the Behemoth for a Hero. Anyway, here's a report on the games...

I missed taking photos of my first two games, the first being a long slugging win against some orcs, and the second game I was run over by a caveman army by turn 3. The Cavemen summoned a God (big dinosaur) which ate one of my Magicians and then vanished, and then a Warband killed my Blade General - game over!

Game 3
I finally pulled out my camera for my third game against Nick's nomadic army of Riders, 2 Blades, a Behemoth and a God. I put down the big lake, thinking I would stand behind it and snipe with Magicians, forgetting that there is a -2 for casting over water!! Anyway, my Magicians run forward boldly...

And bespell the Behemoth which flees off the table. A good start!

Nick then has me in some trouble, with Lurkers popping up behind me on my left, and my Magicians flanked as I'm starved of pips. He also has an opportunity to bring on his God about this point but declines to do so.

Things get better as they Nomads fail to make any further progress, and eventually they lose enough elements and I win the game. 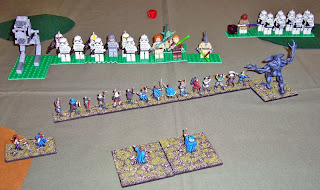 The Star Wars army hits my line and throws it back, killing my Shooter, and Yoda (Hero General), comes close to killing my own General.

However then my double Magicians ensorcell Yoda which wins the game because he is the enemy general! Sneaky nasty Magicians... I love them. Also shows the risk of Hero or Magician Generals which I've stopped taking because this kept happening to me! 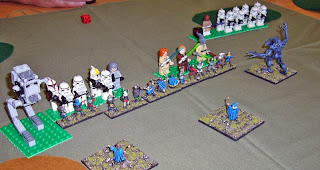 Game 5
My fifth game, against the Seven Years War Expeditionary force of Archduke Piccolo. Knight General, Knight, 2 Riders, 2 Spear (Grenadiers), 4 Musketeers, 1 Lurker and 1 Artillery. There were some tense moments at the start as he flanks my army killing my Shooter. 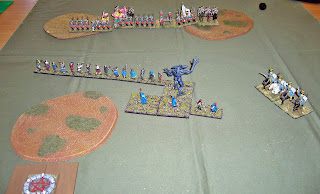 However eventually the Magicians and Behemoth fight off the flank attack and we move to the attack. My Magicians start picking off Shooters before my Blades charge them and the Artillery, another win to me. 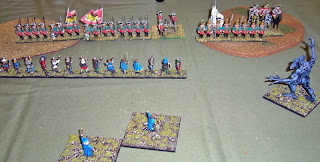 I won 4 games and lost 1. This meant I tied with Kevin's Cavemen -  who ended up winning overall as they had lost less elements in the tournament on countback. Well done to the prehistoric fellows, and to everyone else for another fun day!

More pics at blogs of other players.