I had time for a quick game of Battlefleet Gothic with my mate Mike today. I borrowed his Imperials and he used his Chaos. 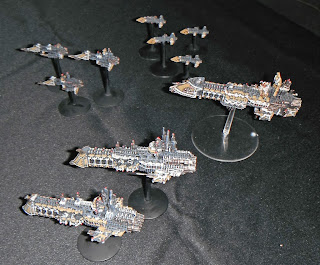 Mike begins and turns his capital ships side on to begin the long range broadside fire, while his Escorts and Fighters provide cover in front. 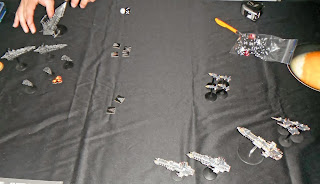 Escort screens pass through each other. We lose an escort each, and I take damage on my Cruisers from the long range fire and some Bombers that get through my defences. My first torpedo salvo is dealt with by enemy fighters. 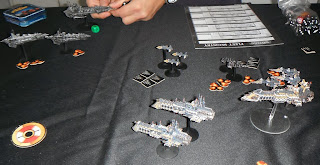 I keep taking heavy damage and a Lunar is crippled. I deliver another torpedo salvo almost crippling an Acheron, but most of my torpedoes miss or blow up trying to fly through the debris. Mike makes his leadership rolls and is successfully ignoring my Escorts to focus on my Cruisers with all his long range Lance batteries. 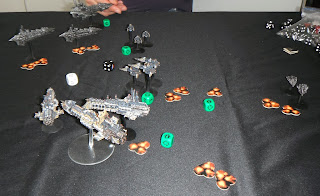 My first Lunar fails to brace for impact and explodes under heavy Lance Battery fire... 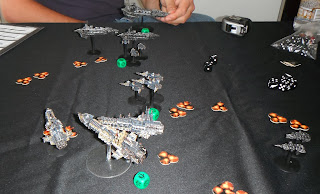 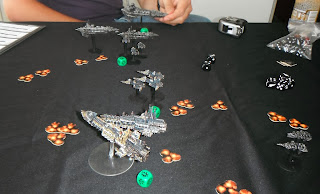 One more turn and my other Lunar is destroyed, and my Grand Cruiser is crippled with engines damaged. One of the Acheron Cruisers is also crippled, but I only have a few Escorts left (including Cobras with  leadership 6 trying and failing to reload torpedoes), against an untouched Battleship and friends. I concede, well done Mike! Also reminds me I should get my own Chaos and Imperials painted up! 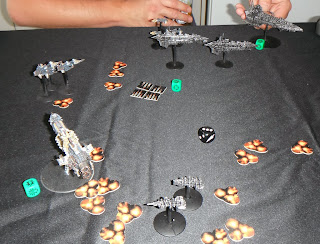