Two games of BFG today, here's the first one versus Jonathan. I took my Orks using the new BFG revised lists which should be up on Afterimagedan's BFG Blog soon.


We played a fleet engagement, with my orks coming in from both short ends of the table and Jon in the middle. I was faced with the classic dilemma of "do I divide my forces?". If I do, I can catch the marines in a pincher movement, but on the other hand it risks the prospect of him concentrating all his forces against part of mine...

I decide to split my Ork forces, with Deathdeala, Terror Ships and Brutes on the the left flank in photo below, and  Kill Kroozers, Brutes and Ravagers on the right flank.

I win the roll for first turn, and decide to rush the Marines and unload everything I can. 11 assault boats manage to wreck all the armaments on a strike cruiser AND the Battle Barge. In addition torpedoes and guns do a point of damage to both of the Strike Cruisers. Seems like a good start!

It gets even better as the Kill Kroozers unleash their volley of torpedoes on the other flank...

Boom! A squadron of Marine Escorts is eliminated.

Now it's the Marines turn and they swing all their remaining ships towards Deathdeala and my Terror Ships.

Feeling rather brave given the damaged systems on the Marine capital ships (and hoping to ram next turn) I don't bother to brace for impact with Deathdeala. This turns out to be a bad idea as Deathdeala takes 10 points of damage - only 2 left! 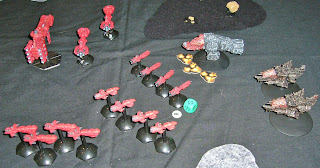 Undaunted, Deathdeala puts all power to thrusters and rams the BattleBarge! But it's just a glancing impact and both ships survive taking only a single point of damage each.  My Terror Ships do better, reloading ordnance and firing like mad they take down another 4 Escorts and damage some systems on the intact Striker Cruiser with more Assault Boats. 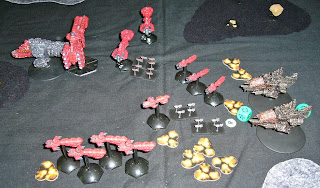 My other ships are racing to get to the action, but they are still a turn or two away... I notice that the entire Marine fleet is managing to concentrate on 3 of my ships (that are also my carriers). "Never divide your forces in the face of the enemy" said many commanders I should have listened to...

Next turn the Marine Capital Ships steer clear of the combat, concentrating on repairing all their damaged systems. The Marine Escorts swing in behind my Terror Ships shooting up the weak rear armour and crippling one of them despite a successful brace for impact order. 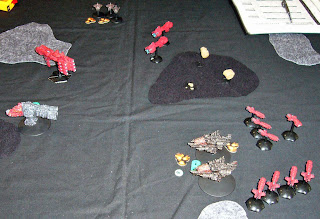 My turn and things are a little heart stopping... as my poor positioning has Deathdeala (on 1 hit point!) and my Kill Kroozas heading straight for Asteroid fields. The Orks ignore orders to slow down and plow straight through the asteroids. Miraculously they avoid taking damage. 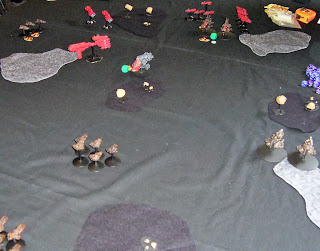 My Brute Ram ships close on the Battle Barge firing ineffectively, while my Terror Ships try to get away from the Marine Escorts - or at least lure them towards the Kill Kroozers.

Another turn, the Marine Escorts finish off my damaged Terror Ship and  damage the other one too. I retaliate with the Kill Kroozers and destroy a couple of the Marine Escorts in return. I continue to fire ineffectively at the Battle Barge with my other ships. 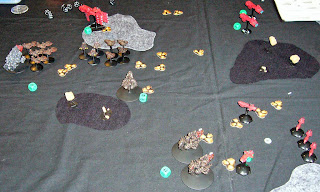 I wreck more Marine Escorts... but the Battlebarge finally finishes off Deathdeala and then starts picking off my Escorts. 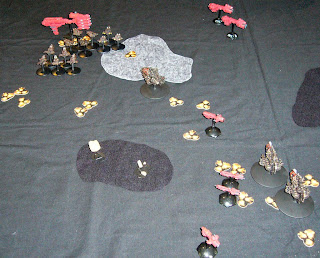 The Marine Escorts close in and finish off the remaining Terror Ship... 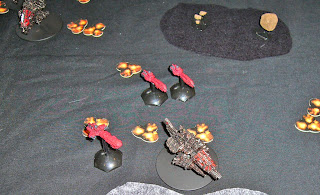 Which explodes also destroying the three Escorts! One last "victory" for the orks... 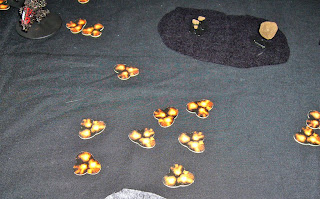 Because the rest of my ships keep failing their leadership tests, and are dying without hope of even taking down the Marine shields by now. The Marine Capital ships have almost completely repaired all the systems that my Orks had conscientiously wrecked, and are now picking off Ork Escorts at leisure.  My two Kill Kroozers beat a hasty retreat, not having the speed or firepower to take on the three Marine Capital ships. Victory to the Marines and well done to Jon! 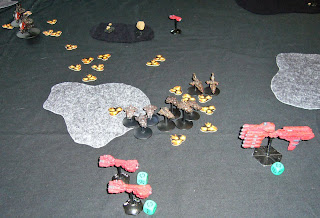